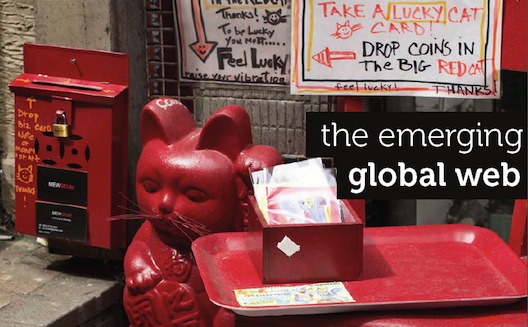 The internet may have been born decades ago in the West, but its future might well play out primarily in developing countries. This is, at least, the analysis that Yiibu, the multinational user experience design and consulting firm, has put forward in a recent SlideShare presentation.

If the future of the internet is happening in developing countries, it’s first because these are still untapped markets. While countries in the developed market are already saturated – internet penetration is over 80% in countries like Canada, Germany, and South Korea – most of Asia and Africa have rates below 40% (many under even 20%). People in these markets  account for a major part of the three billion humans that have yet to use the internet, according to the SlideShare.

And they’re getting into the race at a rapid pace. In 2014, almost half of commercial web traffic data provider Alexa's list of top 20 most visited websites in the world came from fast-growing emerging economies such as China, India, and Russia. And as smartphones designed for emerging economies are getting increasingly cheaper, the number of people who can afford internet access is skyrocketing. Imagine how things will look in a few years, when these markets catch up.

For all these new users, the internet doesn’t look as it did to those who started surfing the web a decade ago. Now, everything is social, P2P, m-commerce and e-commerce, and for those internet users who are not held back by the outdated desktop setup and 1.0 internet habits, things are different. “With little baggage to weigh them down, they can ignore what’s ‘normal’ and turn constraints into opportunities,” Yiibu says in the SlideShare presentation.

For emerging markets, innovation is set free, argues Yiibu. “What may seem futuristic to us, may merely feel practical to others.”

What follows are ways in which people in emerging markets use the internet differently from those in developed countries:

The presentation uses Kuwait as an example, where some merchants use Instagram to exchange sheep or dried fruit, as well as Thailand, where Facebook powers more than 10,000 small businesses. Ever more frequently, merchants in emerging markets make deals on WhatsApp or through comments or messages on social media, and entrepreneurs manage everything through their mobile, even outdated dumb phones, on which they don’t have to bother with online payment or forms.

Another playground for small business is the marketplace. While, in the United States, 76% of online retail involves individual merchants, in China, 90% of online retail is sold through online marketplaces. The largest marketplace is Alibaba’s Tmall, which has garnered more than 180 million customers, 150,000 merchants, and 200,000 well-known brands, including Apple, Peugeot and even Lamborghini. Its C2C version Taobao enables consumers sell products and services online.

E-commerce can also take the form of blogs, highlights Yiibu. The presentation takes an affluent Chinese girl named Jing as an example. She started blogging about her life and style while studying abroad in the UK. Her Taobao shop offers copies of her luxury products that she promotes on her blog and sells on Taobao within hours.

In China, virtual wallet and e-payment are concepts everyone understands, thanks to the messaging app-turned-platform WeChat, which offers these services. In countries such as Kenya, India, and the Philippines, it’s services like M-PESA that are ruling e-payment thanks to its SMS-powered payment and wire services.

Back in China, Alibaba has found a way to increase trust: its online payment platform Alipay acts as an escrow service and only releases payment once goods have been received and accepted by shoppers.

While QR codes have failed to convince mature internet users – who find them too complicated – they’re everywhere in China, having been popularized by WeChat which generates a QR code for each account. Each user can simply print its QR code on a business card, poster, or a website, to redirect people to their account.

In Africa, where many countries have an unreliable or nonexistent postal service, the future of e-commerce could be drones. “Why build expensive roads to remote rural locations when drones can do the job just as well?” asked Monty Munford in a recent Wired article documenting the increasing buzz around the possibility of drone-enabled delivery in sub-Saharan Africa.

Meanwhile, in Russia, fashion e-retailers send sales assistants directly to shoppers’ homes, where they bring the clothes, wait for customers to try them on, offer fashion advice, take returns, and process payments on the spot.

Check out the entire SlideShare for more examples of innovative ways emerging markets are reimagining how to do business.