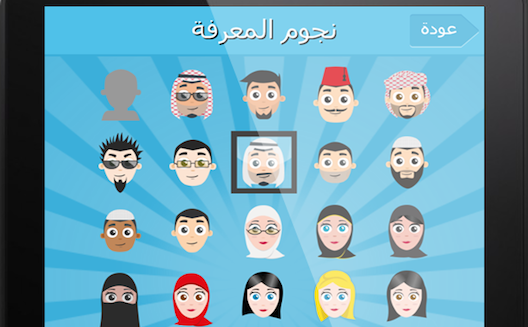 It seems that the online gaming industry revenues exceeding the $100 million USD threshold in the Middle East has been encouraging entrepreneurs to enter the market, especially when it comes to social challenge games.

A few months after the release of AlMwajaha, three Arab entrepreneurs have now launched a similar app, during Ramadan, called Nujoom Almarifa. Also a game where two players take turns answering several rounds of questions, it aims to enrich the Arab user’s culture. Based on general knowledge questions, each round falls under a specific category, of which there are 15, including Islamic knowledge, art, sports, science, and geography.

Just like in AlMwajaha, itself inspired by the German QuizDuel and largely resembling the Icelandic QuizUp, users can either invite their own Facebook friends and chat with them during the game or play with others. The two players compete to win the Najem Almarifa title (Arabic for 'Knowledge Star') through four rounds, each made of three questions and of a category that the two players pick in turns. The game continues until either the two players have answered all the questions or until one of them has surrendered.

While Nujoom Almarifa is a free game, its founders rely on ads to monetize their project. Additionally there are in-app purchases and a $3 USD account upgrade which lets users share pictures and access an infinite number of bonus games when competing with their friends.

So far so popular: based on the game’s concept and development algorithm, Apple Middle East has included Nujoom Almarifa in the top new games on iTunes.

The three partners, Joseph Shomali, Samer Abbas (from Jordan), and Ahmed Alsaffar (from Iraq) founded their game publisher Play 3arabi in April 2014. It is a platform which, according to them, “aims at changing the entertainment culture in the region, and specializes in releasing online games and free game apps for both Android and iOS.”

Launched with seed financing from not only the region but also Silicon Valley and Europe, they prefer to keep investor names close to their chests. Shomali and the other founders consider this as a preparatory stage, to be followed by a second round of funding.

“Revenues so far have exceeded our expectations for the business model, and that is why we are sure that we are on the right track, based on several success metrics: number of downloads since the release, time spent by players playing the game, rate of players shifting from the free version to the paid one. This means that we have grasped it and understood what users are looking for in the region,” says Shomali.

Play 3arabi games are characterized by their full Arabic programming, including their content, software, and graphics. This might not seem unusual, especially that Discover Digital Arabic statistics’ website had declared the digital gaming industry’s growth rate in the region at 46.6%.

They have successfully released Ihzer Elsoura, a puzzle and challenge game for all ages, where players have to guess the word based on the picture. There is also Huroub Ali Baba inspired by stories from the One Thousand and One Nights in which users have to help Ali Baba collect money and escape.

Downloads in excess of 140,000 motivated the founders to launch their third game Nujoom Almarifa at the beginning of Ramadan. In the last three weeks it has managed to draw over 100,000 downloads, with users playing the game for an average of 50 minutes. Looking forward to the rest of the year, fans of Play 3arabi can expect games based on popular themes for the region: football and fighting.