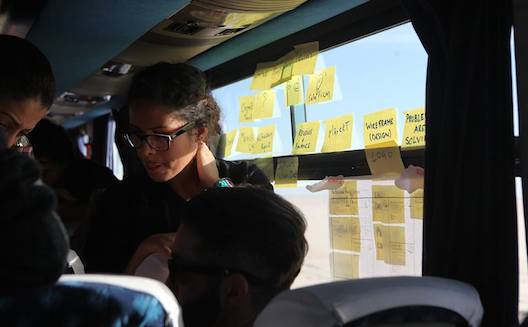 As part of its motorized adventures through Africa the Ampion Venture Bus made its way to North Africa. After having travelled through countries of West, East and South Africa, the hackathon on wheels, was, in December 2014, invited for its tour of Tunisia.

Organized by the Ampion association, in partnership with Startup System Tunisia, the organizer of startup events in Tunisia, Ampion Venture Bus brought together 40 entrepreneurs, half of whom were Tunisians, the rest being made up of Palestinian, Algerian, Moroccan, British, American and German.

Attendees’ profiles were just as varied, including Tunisian and international students, plus experienced and novice entrepreneurs, professionals with more than 10 years experience, as well as those from the humanitarian field.

Bringing these varied profiles together was done with the objective of giving life to startups and solving problems faced in the region. Participants were divided into small groups and together, both on the bus and at various stops, they developed innovative projects. Stops were made at Tunis, Kairouan, Gabes, Sfax and Tozeurn, where they worked in universities and local schools.

Kicking off at Cogite, the Tunisian co-working space located by Lake of Tunis, the organizing team had local players give tips to the attendees for the road.

Leila Charfi, Tunisia country manager for Yunus Social Business called the participants to focus on the economic development of Tunisia at a time when the democratic development is well underway.

For Jazem Halioui, founder of Viamobile to which we owe Mdinar, he said there was a need for patience, learning on the job, the importance of needed documents and signing up to MOOCs.

As the bus got on its way the participants pitched their projects, focusing for the most part on social and economic development, with a touch of innovation.

While previous years’ projects looked at improving daily life, Fabian-Carlos Guhl, co-founder of Ampion, said that this time around the projects were marked with an ethical and community engagement dimension. 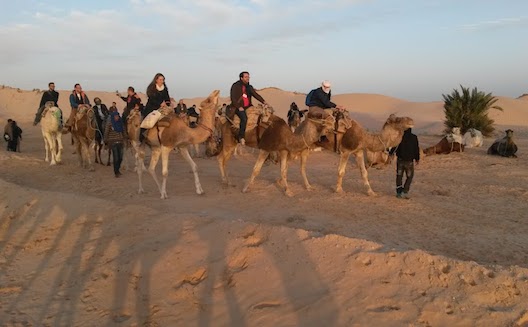 Tozeur, the city of poet Abu El Kacem Chebbi, is impressive. In an oasis in Tunisian desert lies a community of entrepreneurs with great potential. We met those supported by incubators of the API, the Agency for the Promotion of the Industry, working in the areas of biology, recycling, domestic security, photovoltaic panels, and IT.

Participants notably met Hayet Kasmi, a young female graduate from the University of Tozeur, who participated in a national contest where she developed a mobile app that allows one to automatically put the phone in silent mode whenever entering a location that requires it: meeting room, bedroom, mosque... The clever and creative idea, developed in the desert, provided a glimpse of the very promising potentials just waiting to be discovered.

The Venture Bus team then set up a transient camp amidst the dunes of Douz. Enjoying a traditional dinner they set to continuing work on their pitches for the finale, receiving advice from mentors on the trip, but this time under the stars, getting to break every now and then to enjoy songs and darbuka.

Being on the bus proved to create greater productivity. In fact, the proximity between team members created strong links between them, and their collaboration throughout the road trip helped move projects forward rapidly. 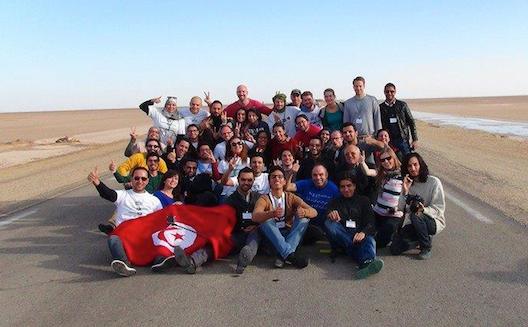 Back to Tunis and the big finale

The bus’ journey came to an end in Tunis at the famous engineering school Esprit.

Pitching their ideas before a panel of stakeholders in the Tunisian entrepreneurship ecosystem (entrepreneurs, investors, NGO leaders) it was clear that things had change a lot since the beginning of the bus adventure. Participants showed more maturity, reflection, and culmination of ideas, but also more ease in pitching their projects.

Although the teams eventually had very close results, TrashCash stood out and  won the first prize thanks to the social yet profitable dimension of the project: a trash can that transforms recyclable cans into telephone credit for consumers, developed by Hamza Barkaoui, Asma Ayed, and Omar Trabelsi. The second prize went to Extrail, a tourist app that provides a personalized activity program according to the profile of the user. And the third prize went to the Citizen + project: a platform that optimizes citizen-municipality collaborations.

Some projects have already attracted the interest of local and regional investors in the final.