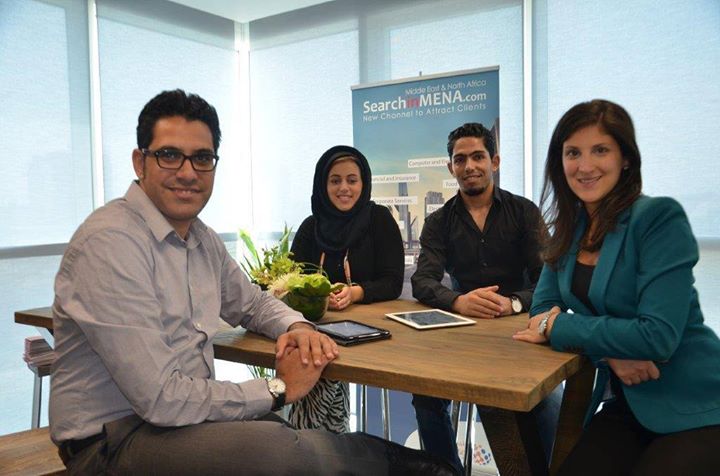 Since then their giant database of local and regional suppliers and service providers has grown exponentially to 25,000 (they had 14,000 registered businesses back in 2013), and they now have more than 1,500 visits per day.

This success, which is still in its early stages, wasn’t easy, especially with Akil’s big ambitions. “The idea was born in 2007 when I was looking online for competitors of my father’s company in Syria, but in vain. And that’s when I had the idea for SearchinSyria.com which later turned into a ‘Yellow Pages’ directory for businesses in Syria,” the founder told Wamda. “By 2010, I had two offices in two different cities in Syria, and the French company, Compass, wanted to acquire the website. However, the deteriorating situation in the country prevented that.”

Akil said though that this helped him gain experience and set a vision for his company, which was to expand his idea to include the whole MENA region. Later, he moved to Lebanon, and then to Dubai in 2011, where he launched SearchinMena.com. A move with its own set of challenges, one of which was a year spent looking for clients and investors in vain. “I met 15 serious investors, until I eventually received an investment offer from the Silicon Oasis Founders incubator.”

SearchinMena.com currently offers its customers around 1,000 categories of products. Two registering options for companies are: for free, or for a yearly $1,000 subscription. “When companies decide to register for free, they receive low traffic because they can only post limited information and one product model” explains Akil. “The paid option, on the other hand, allows them to post about a large number of products and a comprehensive description of their business.”

Akil also adds that when companies register for free they conduct a simple verification process to make sure the company is real, has a physical address, and is posting correct information.

As for visitors (or customers), the website allows them to search through a list of companies that they might not find on Google, as well as finding accurate information about them. Time that might be spent travelling to said businesses is immediately cut out of the equation as customers are able to connect with the sellers through the site, as well as ordering samples of the products they’re after.

When it comes to the companies, most of which come from KSA, UAE, and Egypt, as for customers come from the US, France, Turkey, KSA, and UAE. However, despite these big numbers, SearchinMena.com aspires to reach 150,000 registered companies this year, as well as a further expansion of their network to include Turkey and Morocco. Furthermore, Akil aims at raising the number of customers to 5,000 per day by the end of this year.

For Akil it is the database that constitutes as his biggest challenge, especially when only 15% of the companies have a website of their own, and 85% don’t even have online presence. A solution that Akil is working on is the acquisition of existing websites that have large databases but low income, and launching a wide marketing and advertising campaign through direct sales, especially telephone sales.

SEO and Google Adwords, which is an effective and low-cost solution, are also part of his plan, as well as convincing companies to opt for paid registration.

Lack of trust is also another challenge. According to Akil “customers from outside the region don’t trust companies here and don’t have the necessary tools to check their credibility. We want to be the platform that offers them the opportunity of working in our region.”

In turn, the funds that have been injected into the company have contributed to the continuing development of the website and the services it provides. In this context, Akil tells Wamda that at first he was self-funding the business (it took him $30,000 -  $10,000 of his personal savings and $20,000 from his cousin), and then he obtained mentoring and funding from Silicon Oasis Founders that reached a total of $140,000. However, the amount wasn’t sufficient for Akil, and so he turned to crowdfunding, initially on Eureeca where he raised $140,000, and then through direct funding, eventually raising $450,000.

“Raising money, especially from seed investors, is very difficult,” says Akil. “Eureeca was the best option because it served as a tool to connect with friends and acquaintances and to convince them to invest in my company. It was much like a safe investment marketplace.” Over the next six months they are looking to raise $3 million.

Some good news, but a problem at the same time, is the rise in the value of the company’s shares. This has led to most of the 40 shareholders not wanting to sell their shares (and there is increasing interest from others who want to buy in). “We turned to a financial firm to assess our shares, compared to the global startups marketplace, without taking revenues into consideration.” Akil says that the result was that a $10,000 investment in 2014 (the minimum of which gave 0.5% of the company shares) is today worth $25,000. However, SearchinMena.com, which still largely depends on investment, and is not generating profits, has managed so far to pay the salaries of seven full-time employees.

Akil also told Wamda about his decision to expand to the US, and to open an office for the company in Silicon Valley, would be a strategic movement in the long run - all part of Akil’s plans to launch a mobile version of the site from there, in turn attracting US companies looking to purchase from companies in the MENA region. “In three years, we will need $30 to $50 million from venture capitals, and being in the US is the only way to attract these sums.”

Two years ago Akil said he wanted to build the Alibaba of the Arab world - well, if he can raise his 25,000 registered companies to 400,000, then maybe he can get a place at the negotiating table with the Chinese giant.