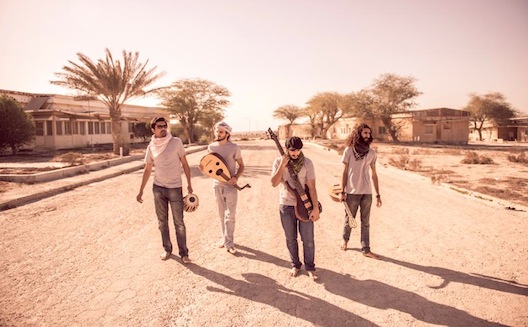 Tiny Bahrain has been making a lot of noise lately. The island kingdom in the Persian Gulf, with its liberal policies toward entertainment (at least compared to its strict neighbors) and diverse populace, has long been a regional focal point for musicians from all genres. But over the past few years, entrepreneurial Bahrainis have launched a crop of new performance spaces, as well as artist collectives and record labels with built-in support tools that have pushed the underground music scene toward more records, more performances, and more public renown in and out of the region.

According to Esra’a al Shafei, the Bahraini founder of regional music streaming site Mideast Tunes, “a few years ago we had about 10 Bahraini bands on Mideast Tunes, and now we have 35.” The scene is gathering momentum exponentially, she reported: “the increasing number of gigs and performances definitely has inspired the movement to grow with newer bands, [more musicians], more advanced skills among musicians…. the range of genres has also shifted” and expanded.

While more young Bahrainis are seeing music as a viable career option now than ever before, music has been a significant part of the Bahraini cultural identity for centuries. “A lot of people in Bahrain are generally interested in music,” said Bahraini music producer and ethnomusicologist Hasan Hujairi over Skype, “because many Bahrainis travel and spent time abroad. We also have a lot of expats and foreigners” from the Gulf and further afield, who have historically brought – and continue to bring – their own traditions to the island kingdom.

“In the Gulf we have ‘pearl diving’ music,” known as fijiri in Arabic, which sprang up around the practice of diving for pearls in the Persian Gulf, a major pillar of the economy before the discovery of oil, Hujairi continued.

Here’s Salem al-Allaan, a fijiri legend, performing with a group of drummers and singers.

More recently, Bahraini music has evolved on top of this foundation (Hujairi gave the example of Ali Bahar, the “Bahraini Bob Marley,” who used traditional pearl diving music rhythms in his songs) and beyond it, with Western-style English language prog rock band Osiris, who gained popularity in the 1970s and remain active today.

Now, young Bahrainis are interested in hip hop, alternative rock, and electronic music. “For a while, everybody wanted to be a DJ,” Hujairi laughed.

“Bahrain for almost a decade has been a hub for underground music,” added al Shafei, whose Mideast Tunes has made serious strides since its founding in 2010. She believes that whatever surge in popularity music is experiencing in Bahrain is not a result of there being more artists; rather, it’s a result of new support spaces and better quality recordings being produced. “The recent element in the scene is the fact that there are more spaces and venues… [the bands themselves] have been around for many years,” she said.

The Red Bull-sponsored Malja, which seeks to provide artists of all kinds with the space and tools to produce art and improve their skills (upcoming workshops include a Music Production 101 class with Sarah Nabil and Bahraini hip hop producer DJ Outlaw; the space also hosted a standup comedy workshop last month), is just one of the new creative endeavors aimed to empower artists in Bahrain.

A little #ThrowbackThursday to opening week. It's great to see so many cool artists all in one space! #MaljaBahrain

Boho Baha, founded in 2011 by two Bahraini musicians with help from the Bahraini Ministry of Culture (now known as the Bahrain Authority of Culture and Antiquities), is a “platform to create experiences that highlight the immense creativity in Bahrain,” according to its Facebook page. “We work with musicians, artists, and creative personalities to create constantly evolving events and experiences.”

There’s also Museland, a “community-based, independent record label that specializes in discovering and promoting promising local talents, developing them, and putting out good music for the masses,” founded in 2009. There’s also the yearly Museland Festival, and so far three compilation albums.

What’s most exciting for stakeholders in the Bahraini music scene is that the vast majority of this new activity is happening at a grassroots, entrepreneurial level. “Some band members put in a lot of effort, risk, and financial investment into building [their careers],” al Shafei said. “How to improve and innovate sustainably is all many of us think about. You can’t go far in the scene without being entrepreneurial and taking initiative.”

“There’s very little government-level emphasis on local music,” Hujairi said. Support that is available is largely focused on teaching the Arab songbook of the 1960s at the National Conservatory of Music – think Fairouz and Um Kulthum – and bringing “world famous performers” to put on shows, rather than empowering local musicians to think creatively.

He added: “The local music scene is arising mainly from private initiatives.” 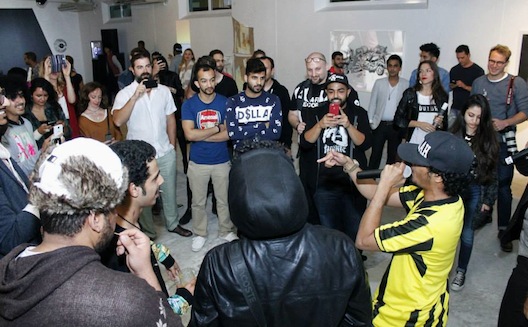 Bahraini MCs break it down at Malja in January. (Image via Malja's Facebook page.)

Given the landscape of political upheaval in Bahrain, more or less ongoing since the first major uprising in 2011, there is the question of whether or not Bahraini artists have begun incorporating aspects of the uprisings into their music. Hujairi was loathe to weigh in – “all I’ll say is that music all over the world is a reflection of the times” – but al Shafei denied that the 2011 uprisings led to more bands. “Some of the artists use [the political upheavals] as a theme in their music,” she explained, “but most of the Bahraini bands on Mideast Tunes were active long before 2011.”

This surge in the number of people wanting to pursue music as a profession has been somewhat of a shock to many Bahrainis, Hujairi said, whose rather traditionalist attitudes regarding what constitutes a successful career don’t include music. “People generally don’t see music as a viable profession in Bahrain,” Hujairi said; “pursuing music professionally is something people don’t do.”

But pushing people past their comfort zones seems to be a goal for the denizens of Bahrain’s burgeoning music scene. Over the next three to five years, Nabil predicted that artists will become even more interested in “working in the grey areas” of religion, politics, and tradition – and for audiences to be more “accepting” of “experimental” ideas. “Everyone is still very careful, treading very secure paths. Hopefully we can push them to challenge themselves.”