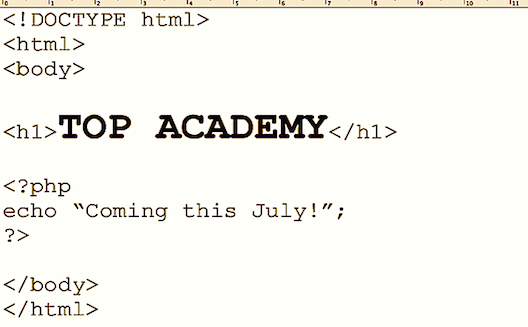 Dozens of MENA startups rely on the assistance that regional seed accelerators provide to catapult them forward—and it in turn helps the overall ecosystem flourish.

But The Online Project—or TOP—a regional social media agency, thinks that to grow tech startups and unlock the region’s potential, acceleration should begin on the individual level too.

“Startup accelerators are all over the place,” says Firas Steitiyeh, TOP’s managing director in Jordan, and after repeatedly struggling to find entry-level developers with the right tech skills, he thought: “Why don’t we work on a ‘people’ or a ‘individuals’ accelerator?”

That sentiment helped give birth to TOP Academy, a six-week software engineering course that begins July 26 in Amman, and focusing on giving Jordanians with an interest in web development hands on vocational training.

The course is designed, according Steitiyeh, to address a chronic lack of local web developers with the right skills and mindset—and aims to produce a crop of graduates qualified to work as junior level developers.

The course will run three hours a day, Sunday to Thursday, and will cover HTML, CSS, Javascript, and PHP and will include hackathons, coding sprints, and peer programming.

The course will be taught by two web developers recruited from local tech companies other than TOP. This is because TOP isn’t technically a “tech” startup—making it an unlikely champion of the cause.

TOP was founded in Jordan in 2009 and provides clients with “everything related to social media: analysis, design, creative work, and technical development,” Steitiyeh said.

But according to Steitiyeh, TOP has always had trouble recruiting technical talents—he’s interviewed roughly 100 candidates for tech-related positions over the last several years and immediately disqualified 70% because he felt they had no knowledge of web development or programming languages.

Steitiyeh always assumed this was because TOP is a media-focused company with a very small development team.

But as time passed, and TOP matured to open new offices in Saudi Arabia, UAE, and Oman, the scope of its projects grew too; social media technology is evolving, and TOP found itself integrating Zain Saudi Arabia’s Facebook page with their VAS and billing systems, and building a flight tracking Twitter bot for Queen Alia Airport.

And, when interacting with Jordanian industry peers, Steitiyeh came to the conclusion that finding good developers wasn’t endemic to TOP, but pandemic to the ecosystem as a whole.

In Steitiyeh’s opinion this because many regional computer science and information technology graduates are being let loose on the industry without proper vocational training.

“There is a gap between what they learn in university and college and what the real deal is.”

So TOP Academy, with technical assistance and advice provided by ArabiaWeather, AlTibbi, StartAppz, and Bayt.com was conceived to create a generation of qualified and passionate developers.

TOP began by conducting a survey amongst industry peers—and out of 15 respondents, 87% percent said they were actively hiring web developers, and 53% said they needed PHP programmers.

And while TOP Academy is about to kick off a lead generation campaign, they have already attracted a handful of applications—including one confirmed student.

“We’re expecting at this stage not to develop a generation of Mark Zuckerberg’s,” says Steitiyeh. “We want to get people with passion and potential placed the in the right direction.”

Steitiyeh is targeting a class-size of 15-20 to maintain a positive student/instructor ratio.

The front-end portion of the class will be taught by Ala'a Badran, a software engineer from bayt.com—the second is still being interviewed.

Course fees amount to JOD850, and cover renting the venue, paying instructors, and all print materials. Pupils are expected to provide their own laptop computers.

There’s a three-tiered discount program as well—one for students, one for Jordan Open Source Association members, and one for female students. The latter, Steitiyeh says, is to address the lack of female developers and software engineers in Jordan; encouragingly, the first confirmed student is a female.

Steitiyeh plans on hosting several information sessions and a university roadshow to generate buzz for the course—and for the future.

“Hopefully in the future we will be introducing multiple tracks: digital marketing, product management, web design, depending on the need of the market.”

Although TOP isn’t a tech-centric company, just like a seed accelerator, producing a crop of young web and business-savvy Jordanians has the potential to benefit the entire market.

If TOP Academy succeeds, TOP will have more opportunities to put its social media expertise to work as new tech startups emerge and flourish, and the ecosystem will benefit from having, as Steitiyeh puts it, a “technical talent pipeline.”

“We hope that this course will help the building up of a new technical and code literate generation that can truly place Jordan on the map.”