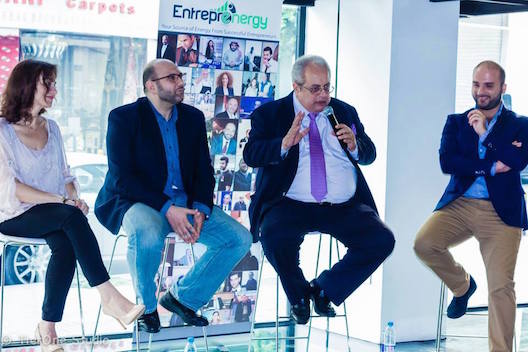 There was plenty to discuss at Energy Boost. (Images via Facebook)

How do you make it big in a country like Lebanon? How do you navigate its tough market and regulations and build a sustainable business? Isn’t it better to simply leave and launch a business somewhere else?

Some 90 aspiring entrepreneurs gathered at the UK Lebanon Tech Hub in Beirut on May 23 at the Energy Boost event to discuss these questions and more. Attendees sought advice on dealing with failure, staying persistent and strategizing their business plans in “a country like Lebanon.”

The event was organized by the Arabic podcast Entreprenergy, who had invited its circle of entrepreneurs previously interviewed on the website.

“We noticed that a lot of entrepreneurs who listen to our podcasts were contacting the interviewees for advice,” said host and founder of Entreprenergy Andre Abi Awad. “We felt that there was a need for a supporting community for entrepreneurs. So we came up with this event to test the market for such opportunities, and the feedback was very positive.”

For Aline Kamakian, founder of insurance company FIG Holding and the owner of Mayrig, a successful Armenian restaurant, entrepreneurship dates back to her teenage years.

“There weren’t a lot of women entrepreneurs when I started,” said Kamakian, who founded her company at the age of 20. “I had to go through a lot of obstacles to change the stereotype of the working Arab woman. And I can tell you that the first issue you face is sexual harassment.”

“It takes longer for a woman to prove herself at work,” she said. “They don’t believe you from the first time. You have to be patient and consistent.” 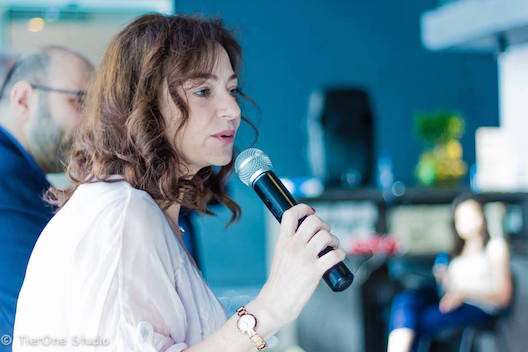 Daher, a working mother who had to work abroad, said she was subjected to a lot of judgement and accusations.

“But the fact is, business is neutral,” she continued. “ As long as you have the talent and skills and education, you can be as good as anyone.”

Kamakian and Daher believe that coaching and mentorship are crucial in accelerating one’s success. “No matter how successful you are, you need a mentor to point out to you the obstacles that you don’t always see,” Kamakian said. “You have to continuously work on improving yourself.”

On making it big in Lebanon

Ziad Abi Chaker is one of several entrepreneurs who chose to stay and operate in Lebanon when many were leaving, and when entrepreneurship wasn’t as celebrated.

“Our core philosophy is that we don’t work outside Lebanon,” said Abi Chaker, founder of waste-recycling company Cedar Environmental. “Lots of offers came from abroad, but we saw a lot of potential in Lebanon as a highly polluted country with a lot of waste,” he continued. “We had two things that helped us along the way: the first was that there were no competitors at the time (people thought such technologies were only applicable in the west) and the second is that we decided to differentiate ourselves.”

“Getting the power out of the ‘minority mafia,’” as AbiChaker put it, was a big issue.

“Waste is usually handled by very few power people and it’s hard to penetrate that circle,” he said.

“When I would tell people that I’m a supply chain consultant, they would look at me as though I spoke a new language,” Saber said. “I had to explain that it was similar to supply chain management procedures but with certified coaching.”

For Bejjani, the largest challenge was the difficulties that come with failure. “You have to do something you’ve never done before and be willing to fail over and over. Humility comes with the willingness to learn and fail.” 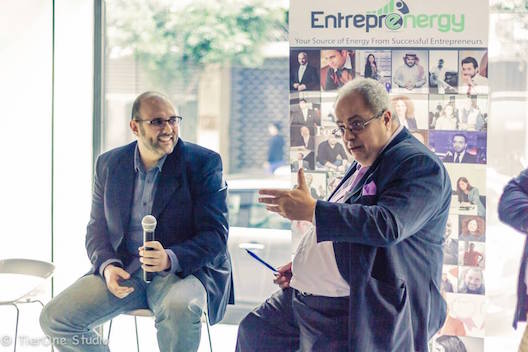 “Differentiate yourself as much as possible,” said Saber, who started working in his field back in his teenage years. “Have your own niche market. Cater to a need that no one else is catering to.”

On getting your first client

Building a company’s portfolio from scratch isn’t easy. That’s why Johnny Frem, founder of Asset Peak Performance, advised audiences to start in their own fields of experience.

“I worked for 11 years in the same company before starting my own venture,” he said. “My old circle of contacts helped me a lot.”

Aside from building on one’s own circle of networks, an entrepreneur must be positive that his services are addressing an unsatisfied need in the market.

“Every business I did was based on a need in the market,” said serial entrepreneur Roger Khater. “This gave me confidence to directly approach customers and offer them my solution.”

What insight could Frem, who’s been in business for more than 20 years, give us on a market like Lebanon?

“What’s unique about Lebanon is that the market suddenly stagnates after a soar, and then suddenly soars again,” Frem said. “What you need to do in these times of stagnation is to create another product that tends to a new market need, because you have to survive financially.”

The organizers of Energy Boost are planning another event for entrepreneurs.

“We plan to have another much larger event in November,” Abi Awad said. “Our aim is to reach a thousand attendees.”