The startup focuses on the personal and emotional interaction between indie artists and their fans by providing tools for musicians to market, share and sell music directly through their fan's social media networks. There is also a gaming aspect to Indiepush, which uses a points system to reward fans for sharing/selling music.

For music fans by musicians

Indiepush was founded by Mahmood Jrere (CEO), Abed Hathut (COO) and Nihad Awidat (CTO), three individuals with strong musical backgrounds. They say it seemed like the perfect time to start the venture, as they themselves could not find a platform where they could easily promote their own music.

Jrere, a musician himself, is a member of Dam – the first Palestinian hip-hop group, founded in 1999. Hatout, from a rock music background, started the rock band Khalas. And Awidat’s background is in electronic music production.

“Indiepush started from passion and love and from a place where musicians could have a platform that was easy to promote themselves and reach a wider crowd,” Jrere says.

But Indiepush was an idea until the three joined the FastForward Accelerator program. Given the founding team’s background in music, the four month program gave them an introduction to the business of startups, helped them research and develop their business model and introduced the team to the accelerator’s network.

They launched the beta version in January.

While Indiepush is still in beta, the goal is to have a platform that reaches a mainstream audience world wide. But to start, they are focusing on MENA, says Mohamad Ismail, Artists & Repertoire lead.

He notes that they initially wanted to help indie musicians sell their music. But they learned that selling albums is not the primary pain point for artists in MENA. Marketing and promotion are much bigger issues.

“If you’re releasing an album independently without a big record company or distribution company, it’s very difficult to reach an audience,” Jrere says.

“Now we’re focusing on how to help bands really promote their music,” Ismail added. “In order to generate more sales you want to be able to better promote the band, making it easier for the artist to tap into circles beyond his current friends and family. So [you want to be] creating a platform that doesn’t only make selling easier but creating a lot of tools for bands to engage and reward their fans.”

And because they feel that an emphasis on mainstream music has reduced the quality of music overall, they’re working diligently to promote music that they believe in.

Indiepush has recruited almost 70 bands to the platform. They have seen exponential growth with over 1,500 users who visit the site on a monthly basis – with the exception of June, which had nearly 4,000 users. And they say they did this mostly by word of mouth and without spending any money on marketing. 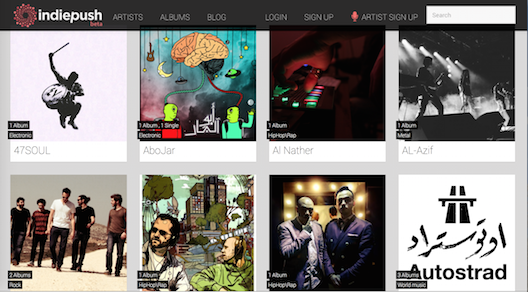 Jrere, the CEO, lives in Lod, a predominantly Palestinian city near Tel Aviv in Israel. But most of the others on the team don’t have permits to travel to Israel. So they meet and work in the West Bank city of Ramallah.

But with team members located in Palestine, Israel, Jordan and the US they believe something like Indiepush transcends borders and bureaucracy. The team has daily Skype calls and uses Slack and Twilio to communicate with one another and assign tasks to the team. They say the setup works great for them.

Looking ahead, six months from now, Jrere says, “We will be making progress and our aim is to have 10,000 users per day sign up we can do that if we provide the right content and tools for the bands and fans.” They’re also in talks to develop a mobile app so fans can connect with bands on the go.

Since their launch and after completing FastForward, they’ve been trying to get Indiepush to a place where they can seek series A funding. As such, they prefer that the platform grows organically until they reach that point. Hatout, the team’s COO, is currently spending time in the US, forging relationships with the indie music scene there and leading the talks with potential investors.

They’re also tapping into various partnerships and integrating with the offline music scene. They hope to have a presence with music festivals, and eventually plan to sell musician merchandise online and in Jo Bedu stores.

And with crowdfunding platform Zoomaal, they helped facilitate funding for 47SOUL, a new MENA band. 47SOUL seems to be a great model for Indiepush as they listed Indiepush as the recommended retailer for discovering indie artists in the MENA.

They believe that the fundamental flaw with regards to their competitors however, is the lack of connection between fans and artists.

And it all goes back to their love of music. When asked what their most pressing challenge is, they say popularizing indie music while keeping it indie – they want to redefine what the standard is so that more indie artists are heard on the radio.

“The world is changing and it’s very easy to put a song out there but the challenge is to get it heard,” Jrere says. “Everyday, good music is being created around us, so we want to be relevant to the youth and to the reality in the region.”