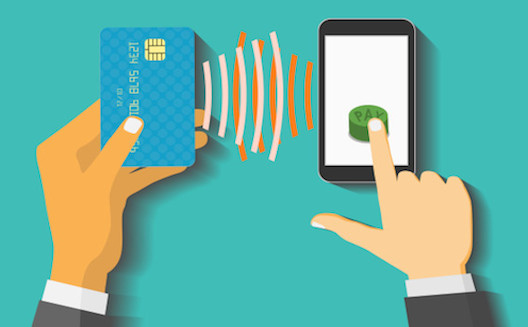 Bye to coins and receipts, hello to the phone? (Image via issaasad.me)

What will the wallet of the future look like?

This question has been on the minds of companies like Apple, Google and Samsung for years. If they have their way the answer will be simple: a smartphone.

While the companies all agree that smartphones are the future, they all have different opinions on what this future will look like.

We’ve taken a look at how each brand has been marketing their product and highlighted some of the unique features of each service. With fierce competition and billions of dollars at stake, the battle for wallet supremacy begins in 2015.

Though it hasn’t hit the market yet, Android pay has already started their marketing campaign with a catchy commercial. Their theme is a captivating one: provide users with a fast and secure way to pay anyone, in any scenario.

One area that stands out in the Android Pay advert is its focus on in-app mobile payments — an area that will likely be the foundation for mobile payments going forward. The ability to pay within apps has been rolled out over the past two years but linking this process with real world purchases will bring in-app purchases to a much larger audience.

At this stage, Samsung Pay is still a bit of a mystery. Though it has been featured in the Galaxy S6 edge it takes a back seat to other features and the overall product design. Samsung seems focused on marketing their payment option as a device feature rather than a stand alone product. They know that in order for Samsung Pay to be successful they first need to make their smartphones a success.

There is also a heavy emphasis on the tagline “next is now,” Samsung is eager to highlight that paying by mobile isn’t just a feature, it’s part of the overall Samsung experience.

In the past decade, Apple has honed its skills and when it comes to making their product appealing and there is no denying their efforts have been exceedingly successful. Apple pay seems to be positioning itself in a similar fashion to Android Pay, offering flexible payment options that are both fast and secure.

Though not highlighted to the same degree, Apple Pay will also include in-app payments, but at this time it does not include person-to-person payments, something that will likely be picked up by third party apps for the time being.

The growth of mobile payments

So what will the mobile payment landscape look like in the next year? While exact figures and rollout dates are unclear, there is some information circulating that gives an idea of what growth will look like.

At Apple’s Worldwide Developers Conference this year, the CEO Tim Cook announced that Apple Pay would be available in one million locations come July.

We expect Google and Samsung to achieve something similar when rolled out later this year.

In the Middle East you can expect a great deal of interest from both brick and mortar shops, as well as ecommerce, as they look to capitalize on the region’s large smartphone population. By merging mobile payments with real world stores we will likely see more comfort when it comes to making online purchases.

It will take time for consumer behavior to change but with more acceptance, and a strong push from established players, 2015 will likely be the year you make your first purchase with mobile payments.