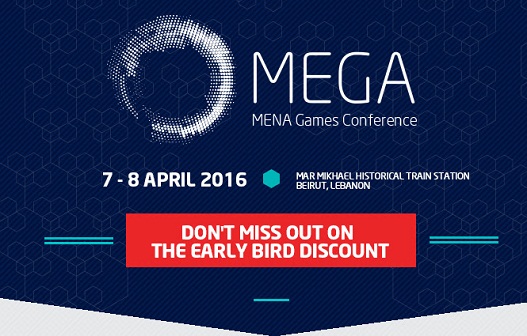 Organized by IFP Group, the MENA Games Conference aims to promote and help expand the regional gaming industry, offering international players a unique platform to explore business opportunities in what is widely regarded as a highly promising market. The conference will take place between 7-8 April  at Mar Mikhael Historical Train Station - Beirut, Lebanon. Early bird discount is valid until 15 February.

Around 800 firms working in a variety of fields from game developing and publishing to infrastructure, financing and online advertising will be present at MEGA 2016. In addition, the world-class conference will host more than 50 speakers, who will discuss the future of gaming and IT in the region.

MEGA 2016 also boasts a series of game development workshops, a matchmaking area, which allows for efficient pre-arranged B2B meetings, and the Arabic Game Jam, which sees teams of game enthusiasts and developers compete for 48 hours in order to create the best Arabic game.

Speakers include Jason Della Rocca, former executive director of the International Game Developers Association (IGDA), Tom Crago, CEO and owner of internationally renowned Tantalus, and Teut Weidemann, who has been working in the professional gaming Industry since 1987.

Use the promocode Wamdamega for 20% off your ticket!

Research has shown that 60 percent of Arab gamers and Internet users prefer digital content provided in Arabic, which has given birth to a burgeoning industry of game developers, some of whom went on to conclude partnerships with international publishers and distributors. Most games developed in the MENA region, over two-third, concern mobile and/ or social media games, including such hits as Birdy Nam Nam and Angry Birds.