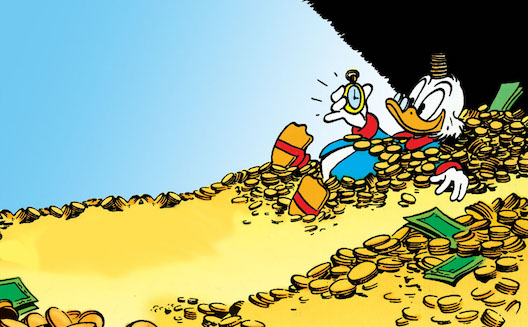 Has the time for Tunisian startups finally come? (Image via Disney)

How did they get there?

Sami Tounsi launched MonResto.tn in 2010. The platform connects users and restaurants for a fee.

“We’re struggled for five years without being profitable,” Tounsi explained.

Due to the country’s political situation, the team worked cautiously for about four years. Instead of investing in a backend, they handled everything manually and took just a limited number of orders.

In 2014 they launched their automated platform, and Tounsi can finally start promoting the service. A year later the number of orders had doubled, and the startup was profitable.

With a few exceptions, all the startups that are now profitable went through two to four years of struggle, trying to find the right monetization model or convincing their clients they deserved their trust.

Another common point all those startups have: they spent very little money.

Tounsi, for instance, chose to outsource delivery, and avoided all unnecessary expenditures.

“We’d limit our charges to the minimum,” he remembered.

When the budget is tight, one needs to be ready to put life on hold and work as if four.

“We had to work with a reduced team of four to five people during the first year of commercialization to reduce our charges,” said Jazem Halioui of Webradar. “Signing contracts abroad helped us breathe a little and start growing the team.”

But once costs are controlled, the model is proven, and the process in place, startups have to raise revenues.

“We’ve had a lot of charges […] and we couldn’t not cover them,” remembers Ahmed Benaïssa. “It was obvious that only increasing sales would allow us to reach the profitably we were hoping for.”

In 2014, Benaïssa launched Tiklik, an online ticketing service. They had to wait six months to sign their first contract with an event organizer but once they reached a few events, things accelerated.

Like Tounsi, Benaïssa chose to keep a full time job and hire a team, decided it was time to quit and take back the reins of the company. He changed the pitch and the strategy and in three months brought the number of events from 80 to 1,000. Once he reached this threshold, two years after its launch, Tiklik became profitable.

Today, most profitable web players we’ve talked to, like MonResto.tn, ilBoursa, Bigdeal.tn, Cybereresa, are leaders in their sectors in Tunisia.

Tunisia is a small country. If this market was enough for most startups we talked to to become profitable, they had to turn to foreign markets to start making some real money.

“In Tunisia, we could [have been profitable] but we were going to suffer,” said Wassim Ghliss, manager of Cyberesa, the technology company supplying travel booking platform Traveltodo.

Launched in 2002 as a side project, the project reached profitability by 2006 thanks to two revenue streams. The company takes a commission on each B2C reservation and sells licenses and maintenance of its software to other companies.

Today, the company earns 65 percent of its revenues abroad. The company has an office in Morocco and clients in Algeria, Libya, Malta, Egypt, Saudi Arabia, and Jordan.

Entrepreneurs sometimes have to be willing to sell side projects while they wait to scale.

Ismail Ben Sassi of ilBoursa knew he’d have to wait a year to get an audience large enough to attract advertisers. So the first year, he developed a game that allowed web users to buy and sell stocks with play money, and sold it to Tunis’ Stock Exchange.

“[A budding company] needs at the beginning to ensure [that] money comes in,” said Amine Chouaib who launched Chifco, a company dedicated to connected devices, in 2010. To survive the first few years, he had to find other sources of income, like consulting. The company is now in the green thanks to the sale of its products and services to partner companies.

Starting with less complex projects has the advantage to “show your capacity to deliver […], created a positive dynamic, and attract leads for major products,” Chouaib added.

Another similarity: all startups are in a unique market and offer value to their users.

For Tiklik’s Benaïssa, the true reason behind their success is quality.

“It was quite simple - competitors of our clients saw that it worked well for our clients and the frequentation rate of their establishments raised. This convinced them to use our services,” he said.

“We’re in a niche with no real competitor,” Ben Sassi said.

In Tunisia, everything remains to be done. If an entrepreneur finds a niche and brings on a quality service, he can go very far, he added.