In 2015 Wamda produced a report that showed 60 percent of Arabs wanted to read online content in Arabic.

That would be great if there was an equivalent statistic for how much online content was actually available in Arabic. According to Internet World Stats the Arabic speaking population using the internet is just over 50 percent. Various numbers exist around how much global online content is in Arabic, and none are good - the average is about 3 percent.

For entrepreneur Nawaf Felemban, these numbers can be addressed. Moving from engineering to education, he is now attempting to plug this gap in the Arabic online content space, with his, “viral stories publisher” Kasra.

After four years with McKinsey & Company in the region Felemban wanted to make a move that would allow him to work more with Arab youth. He looked around and decided that “the best way to do that was to reach out to them through their platform of choice, digital media, and I looked elsewhere to see what models succeeded in terms of connecting with youth and it was the Buzzfeeds”.

Launching the site in May 2014, Kasra now receives three million unique visitors a month - there is a high demand for what he’s got. He shared with Wamda what he knows about Arabic digital content.

Preservation of culture is key. As an example film was focused on different things, it was focused on entertainment, MTV for me is a great example of a preservation of culture, value adding for American culture. People have a unified image of the 80s because of this and there is absolutely no equivalent in Arabic. Arabic movies are a good indicator of the times but it’s limited, it was focused on different things, they were portraying a fictitious reality, it’s not a true representation.

Content is for some but not for all. If you look [at online content] it’s mostly agenda driven and you’re either aligned with it or not. If you talk about sports, Kooora is most popular, but it’s for football fans only. The examples that you may find ‘for all’ are limited. Yahoo! Maktoob or MSN Arabic, but in the end it’s content from foreigners targeted at locals. Then you look at other sites and some content is very high brow. With other sites, the objective has been to elevate the public debate around social and political issues as opposed to just being agenda driven. The challenge then came that those debating were the ones who were very sophisticated in terms of their thinking, so you miss out on the mass population.

We are not encouraged to write. Throughout history, Arabs have celebrated their language. Muslims believe every prophet came with a miracle and Prophet Muhammad came with the miracle of the Quran and if you go deeper, it came with the idea that the best linguist of the time could not match that of the Koranic script. That has carried until now. We celebrate poets that can master the language, pieces that are convoluted and complex in formulation of language, but what happened was that we elevated the language to a point where it is difficult to use it as a tool for communication. Even when you have tech being introduced into our lives, the words that we chose to represent the tech is often difficult so people will drop the word in Arabic and adopt the word in English. We are not willing to evolve the language. In English it’s a PC, and in Arabic it’s like four words. It would be as if English speakers were still only writing in Shakespearean English.

What is out there is worse than the tiny percentage [of online arabic content]. There is concentration in the topics. If you look at unique content across the 1 to 3 percent of content and you strip away all duplication of content, it’s even smaller than that. And if you don’t have the industry you won’t have the people to contribute to it.

Twitter changed everything. Twitter broke a little of that barrier to stopping people from expressing themselves. This was a great excuse for people to respond to the Arabic police. “I’m forced to write in 140 characters so I have to break the rules of the language”. Saudi has big numbers on Twitter but it’s mostly bots or retweets, in terms of real content it’s minimal, but there will be more interest from the youth to start to express more. As soon as you have that tipping point, it will have a spillover effect.

Take baby steps. You can’t go to an extreme or you will lose people.Moving in small steps shows that language can evolve in a way that means you can still preserve and make it a tool to communicate. We write in a style that is closer to classical, the way they write in newspapers. But we don’t use words that are not commonly used. If a writer used a certain expression that is common in written form but not in spoken form then we find an alternative. So, even though it’s classical it is closer to spoken. 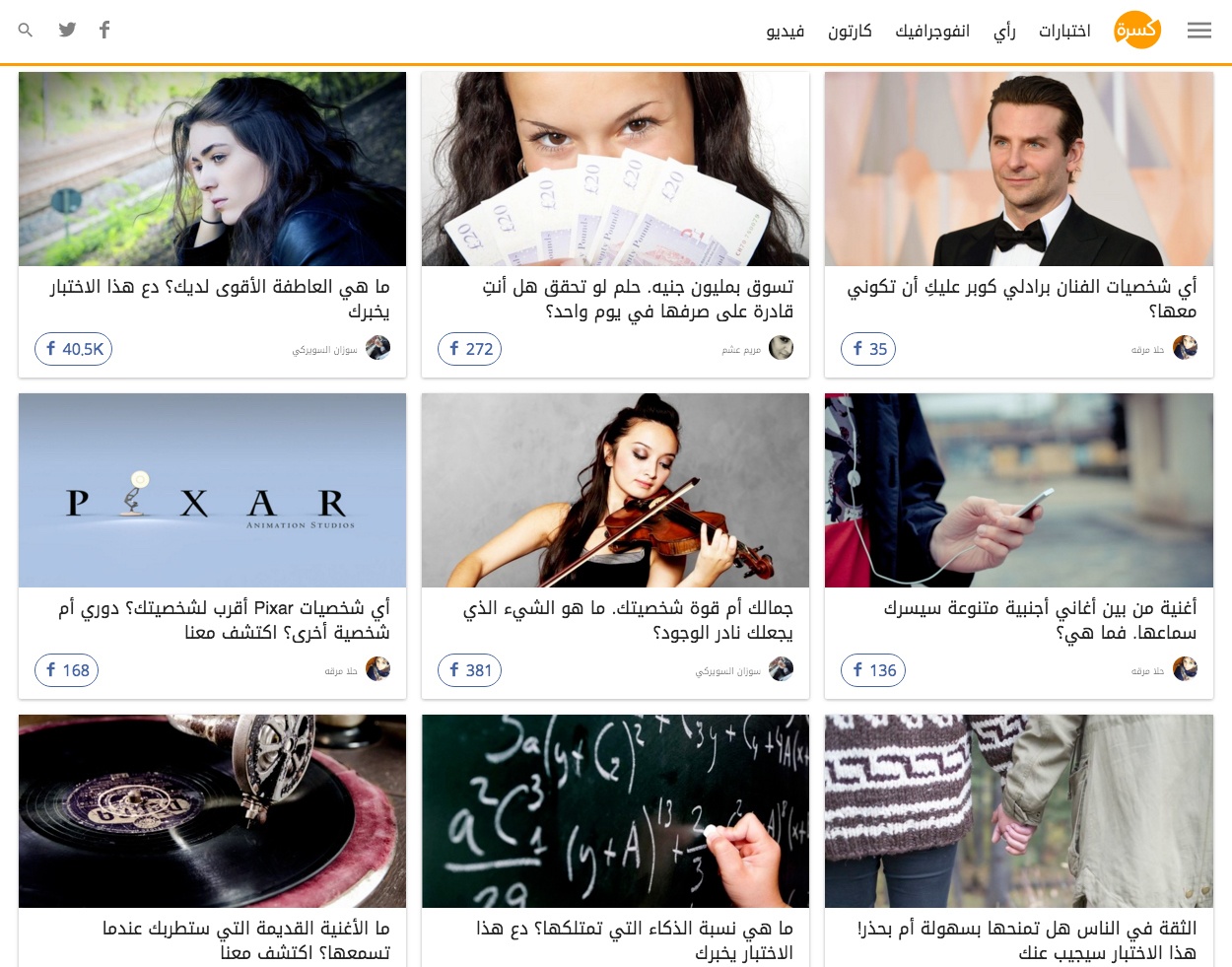 Readers want to get personal. We have found personal stories and personality driven quizzes are popular and this is borne out of us losing our identity. We talk about ‘Arab identity’ but ask anybody what it means to be an Arab and they’ll give you a political definition or an ethnic definition. An identity is a language, a culture, experiences, shared commonalities. What does the life of an Algerian look like? No clue because we don’t exchange experiences across borders. There’s being a ‘khaleeji’ - because of proximity, because of exposure, I can see the commonalities, habits, customs, dialects, but to talk about an Arab identity, it’s a bit of an illusion, it’s not until we share our customs and habits that we can say what we have in common. When I hear a story about the only female tuk tuk driver in Cairo this starts to tell me about that environment.

Arabs are not the narrators of their story. It was always shocking to me that the best content I could find about the region was in English. When you see a stat that says like 97 percent of Egyptians and Saudis prefer to consume content in Arabic, where are they going to go?

They’re going to word of mouth and this is dangerous. Society is evolving very fast, not just in tech but in the means, the tools. Take credit cards; when they were introduced in Saudi the perception of what credit was was completely wrong, people gave the wrong spin and they thought it was a line of credit on your asset rather than a debt. so people were getting into trouble because of lack of awareness. If you google ‘personal finance’ in English you’ll get millions of hits, but in Arabic, nothing, so you’d ask a friend…. You have all these media channels and research institutes trying to define what an Arab is, and you can go to the extremes and you have Donald Trump but he is putting an identity on what it is to be an Arab, to be a Muslim.