Ding, the fastest way to send international mobile top-up, today launched the second Ding Global Prepaid Index (GPI) in the United Arab Emirates and Saudi Arabia. Consumers in the GCC are among the world’s most avid users of social media but concerns over data use and misuse of platforms remain high according to the Ding GPI.

This bi-annual global study commissioned by Ding, the world’s largest mobile top-up service, examines the views of 6,250 respondents across the KSA, UAE, Nigeria,  Indonesia, Germany, India, Mexico, Brazil, and the Philippines, regarding their engagement in the prepaid market and their attitudes towards the economy. The study found that GCC is one of the largest users of prepaid products with 89 per cent (KSA) and 86 per cent  (UAE) of those surveyed claiming to operate in this economy. 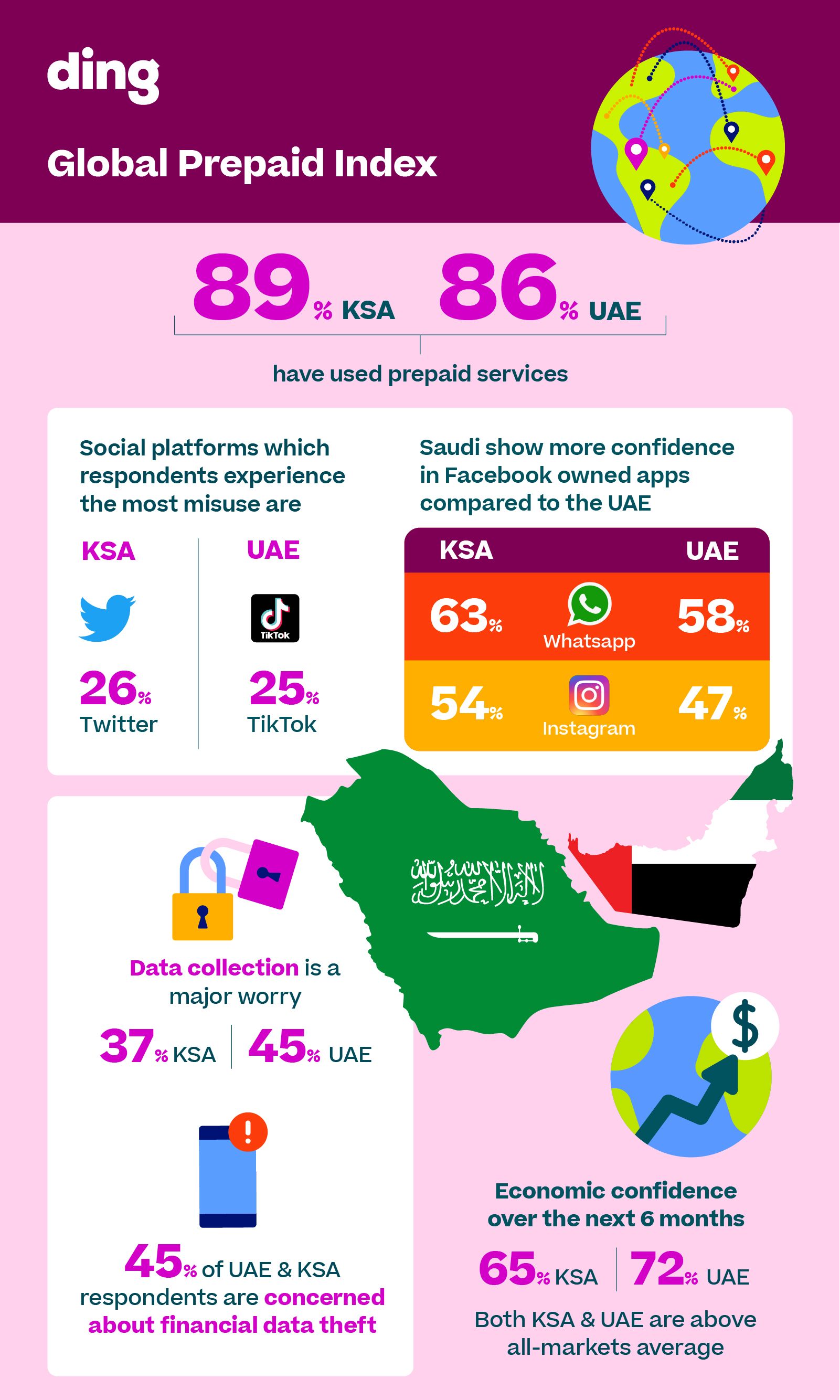 Almost half (46 per cent) of respondents in the UAE cited data collection as a major worry,  followed by 45 per cent concerned about financial data theft. The results were similar in KSA at  39 per cent and 47 per cent respectively, showing issues of data protection weigh heavily on these  Middle East populations in spite of major social media penetration and phone use in both markets.

Comparatively, the Philippines showed the highest fear of illegal data collection (63 per cent)  and Germany the least (32 per cent). Conversely, Nigeria showed the biggest fears of financial data being stolen (60 per cent) and India the least (38 per cent).

Misuse or online abuse appears across platforms though there are variations from country to country as to consumer concerns. Respondents in the UAE witness or experience more misuse on TikTok (25 per cent) than most other markets and on LinkedIn, the level is double the average seen in other markets (12 per cent).

“The GPI findings across the board are very insightful as they show that even if the UAE  and KSA share many market similarities, the experience consumers have online, directly impacts their trust,” said Mark Roden, founder & chief executive of Ding. “While the  UAE and Saudi Arabia have some of the Index’s best results for online safety, the issue has  become a global concern and with the recent issues we have seen across social media and spyware revelations, these fluctuations in the trust are very much in line with a global  trend.”

When looking at the economy over the next 6 months, the UAE is the most confident (at  72 per cent) of all countries surveyed. This may be due to the excitement generated by the launch of Dubai Expo 2020. The Saudi respondents came third in the rankings at 65 per cent.