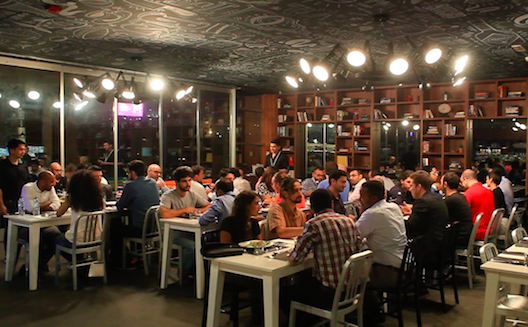 Hosted at the GE Ecomagination Center in Masdar City, Abu Dhabi, the event comes as part of a partnership announced by both companies in April 2015.

With the aim of offering professional support and mentorship for a dozen startups in the MENA region, 18 managers and senior employees from GE were matched with 16 entrepreneurs.

“We are really passionate about the MEMakers Venture Program because it is inspiring the love for solving in industries like healthcare, energy, IoT and advanced manufacturing,” said Rania Rostom, chief innovation and communications officer MENAT at GE. “We are confident that a lot of startups, and tech makers are very passionate about what industry can unlock in terms of the future for this region.”

Not exclusively about mentorship, the program also served as a way to introduce GE employees to the entrepreneurial mindset and put them in the shoes of today’s entrepreneurs. At the end of the day, GE mentors and entrepreneurs have set clear milestones on which they will be working together in the upcoming 6 weeks to solve selected startup challenges. 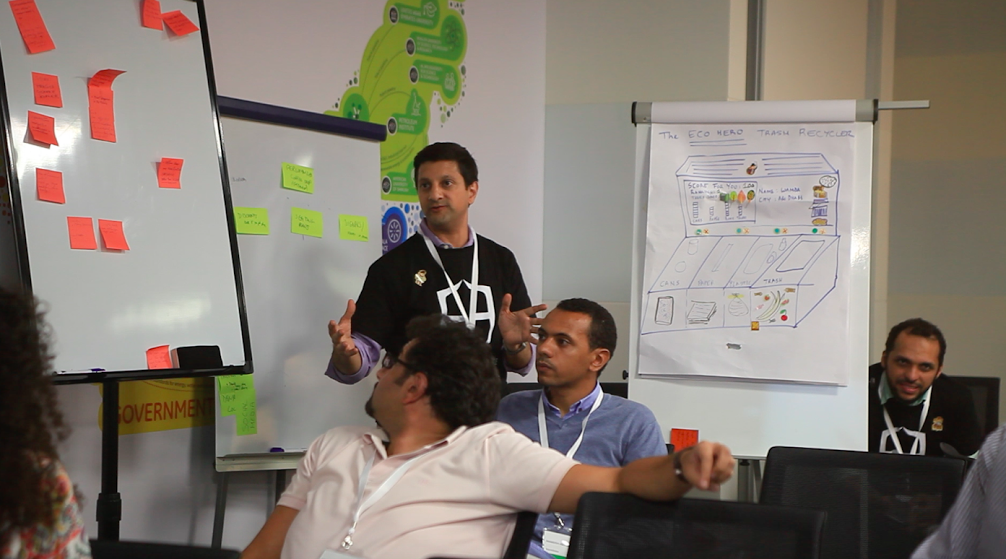 The program started with an introductory dinner in Dubai, during which both GE mentors and entrepreneurs took part in ice breaker games. As the participants hunted down their counterparts for the next day’s activities the atmosphere got friendly, quickly.

A day of matchmaking

The fusion of the entrepreneurs’ ease in pitching and the mentors’ corporate touch resulted in some unique presentations. Check the video below to see what the RoadieTuner pitch looked like, presented by Hany Bayaa, director of operations, commercial and marketing at GE M.East, Africa, Turkey, Central Asia, Russia; and Edison Engineer for power and water, Mohammad Anwar:In the morning GE mentors interviewed entrepreneurs about their startups, then took the stage and pitched the startups ideas back to the audience.

GE mentors took part in a design thinking exercise throughout the day.

Taking to the streets of Masdar City they interviewed inhabitants about the work they do. Afterwards they worked side by side with entrepreneurs to solve specific challenges all revolving around industry focused solutions such as recycling, connectivity, sociability and mobility in cities.

The most notable element was the responsiveness of GE mentors and their engagement with prototyping solutions with entrepreneurs. They were very driven, motivated and excited about each of the steps. 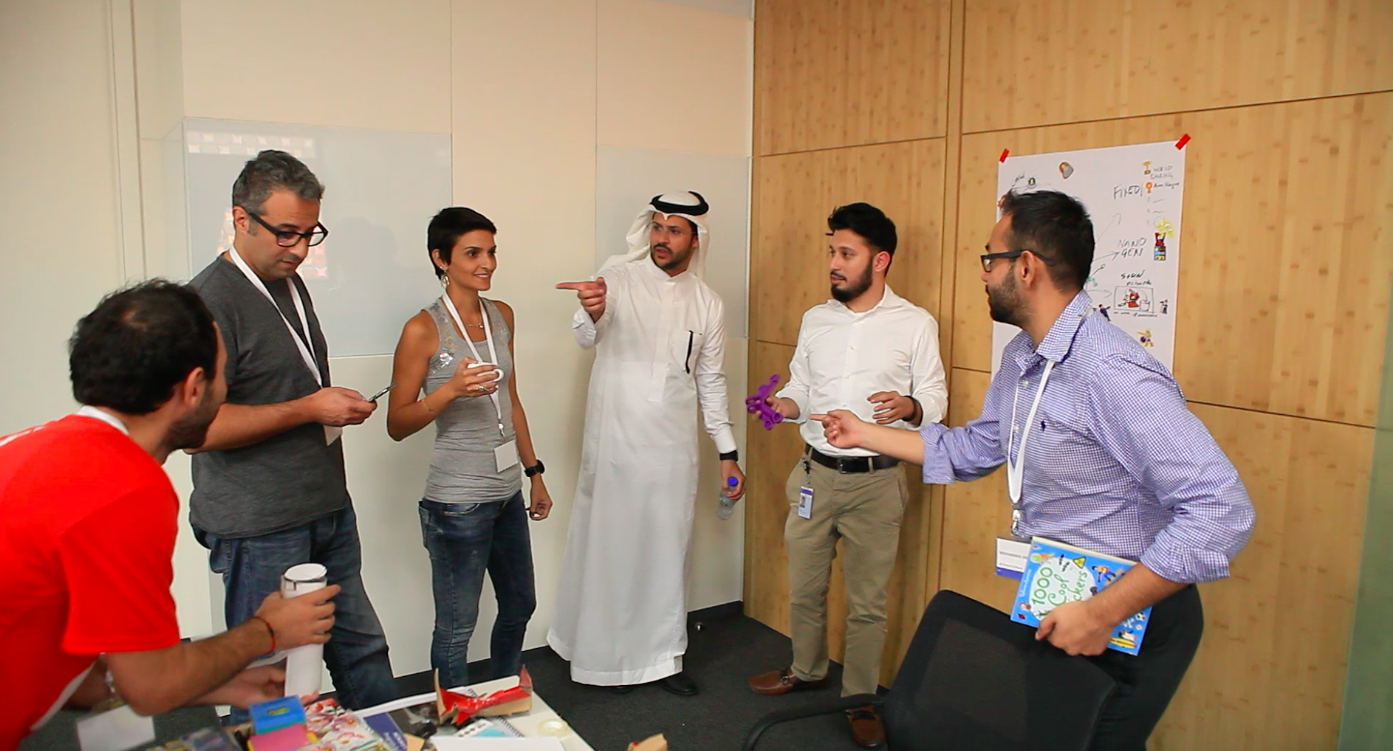 One of the 6 teams during the Design Thinking Workshop

During the day, while interacting with the GE mentors, we gathered some insights and observations on the dynamics between entrepreneurs and corporations - what they liked, what they suggested and how the two can have a smoother collaboration.

How should entrepreneurs better communicate with corporations like GE?

“Many of the entrepreneurs requested to present their products to GE and its customers as a potential buyer. In my opinion, this strategy seldom works. Large corporates are usually lean and flexible on their CSR and community engagement end, but rather bureaucratic and slow when it comes to the supply chain. Entrepreneurs should take advantage of the partnership opportunity with GE, or any other large corporates or government entities, to gain access to expert opinion, R&D support, expensive equipment and PR/Marketing. This in my opinion is far more beneficial to startups in the long run.” - Yousef Hammad, previously with GE Aviation and currently associate at BECO Capital. 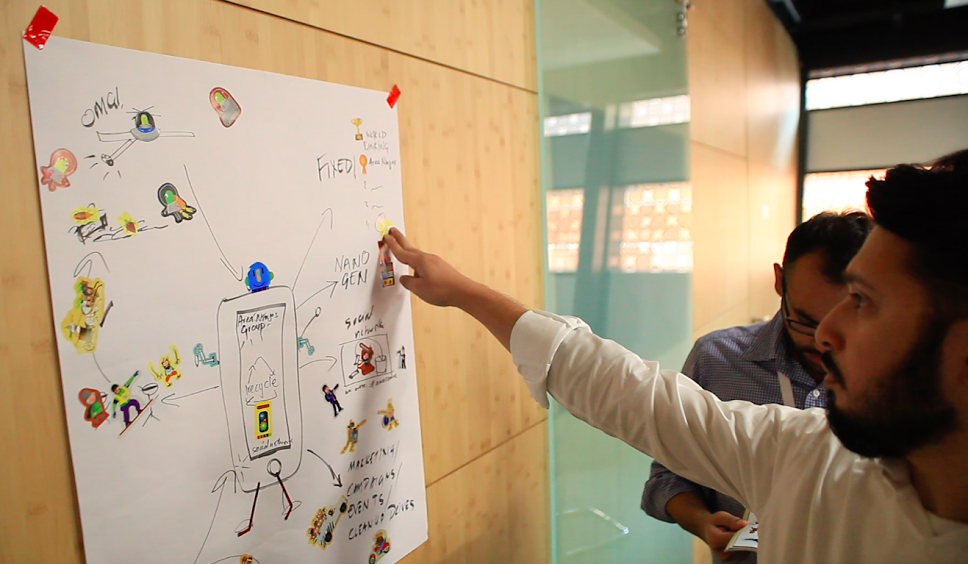 The most surprising things about working with entrepreneurs?

“Their process is much simpler than corporate, which is amazing. For example, market research is as easy as going out and asking people by themselves; for us it needs a lot of preparation and team involvement, before hiring a research agency to do it. So something that might take a day or two for entrepreneurs, would take us months!” - Hany Bayaa, director of operations, commercial and marketing at GE M.East, Africa, Turkey, Central Asia, Russia. 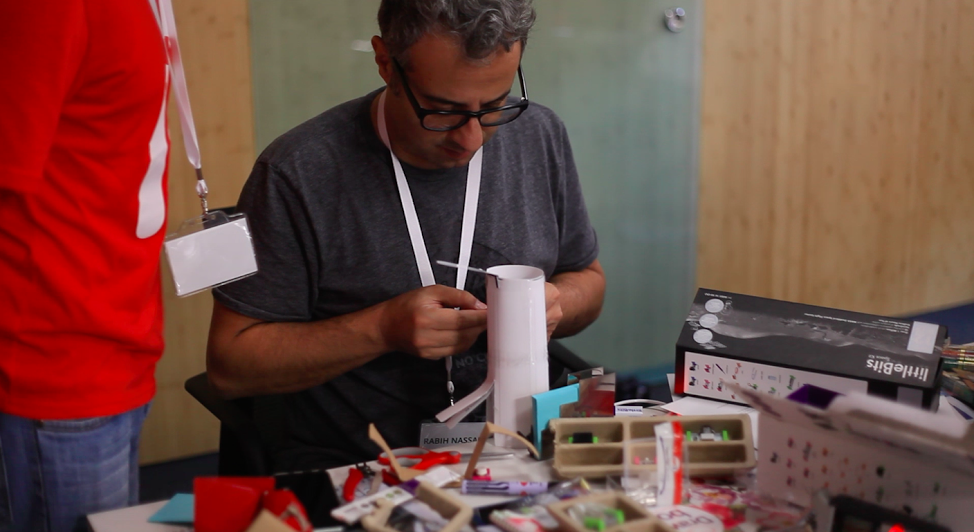 What did you learn from entrepreneurs?

The challenges entrepreneurs need to address, according to the mentors

“Some of them have already started developing V2 (version two) of their products and are gearing up to launch it, while they are still thin on market penetration. Tactically V1 should be good enough for market penetration (for a startup) and V2 should be built based on customers' feedback and launched at a different milestone to gain market share.” - Hany Bayaa.

“Many of the entrepreneurs I interacted with are involved in multiple entrepreneurial projects or ventures, which takes away the needed focus.” - Yousef Hammad.

“Be open to think outside the box on business models and explore industries that might not have been in focus in the beginning”. - Sibu Siddique.