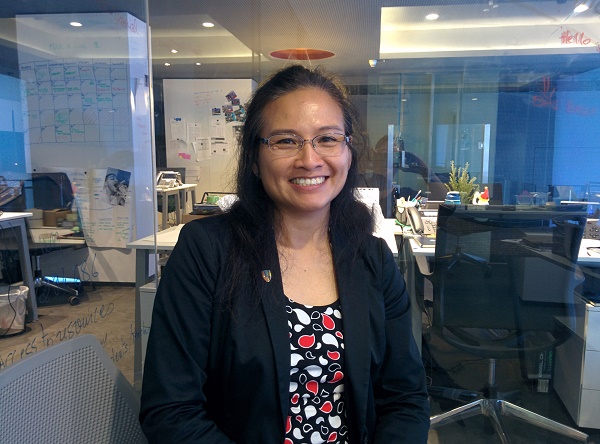 Emeline Paat was in Beirut in March experimenting with plastic bag-based insulation systems for refugee tents. (Image via Rachel Williamson)

The first ‘Star Wars’ was released, revolutionizing cinematic special effects and inspiring a generation to look up to the stars.

The Voyager missions would take advantage of a once-in-176-year opportunity where the biggest planets in our solar system align on one side of the sun, allowing the two spacecraft to use ‘gravitational assists’ (a concept popularized in another movie, ‘The Martian’) to visit interstellar space.

A 72-second radio transmission, nicknamed the ‘Wow’ signal, was picked up from the direction of the Sagittarius constellation - its origins and message remain a mystery.

And it was the year Emeline Paat-Dahlstrom fell in love with the idea of space travel after seeing, of course, ‘Star Wars: A New Hope’.

Today she is the chief impact officer for Singularity University. After that trip to the movies she made a conscious decision to study physics and aeronautical engineering, to lift her chances of being chosen for a space flight, and has worked for startups pioneering private space travel: Space Adventures which does spaceflights to the international space station, and Odyssey Moon which wants to send people to the moon again after landings were abandoned following the last one in 1972.

Paat Dahlstrom, who is from the Philippines and now lives in California, thinks she’ll leave the Earth’s atmosphere sometime in her lifetime, but there are a few factors that must change before space travel stops being the prerogative of millionaires and government-funded astronauts, cost being one of them.

But even if that opportunity never arises, the technology and opportunities that she describes coming from private sector research are game changers in themselves.

Space is an existential risk. Millions of years ago we were hit by an asteroid and the dinosaurs were annihilated. There’s a bunch of near-earth asteroids flying around the solar system and everyday people keep finding more. A few decades ago we only knew of a handful of them and now there’s thousands. Then there are the ones that are Earth-crossing which means that at some point in time, if the timing is right, they could hit us. What are we doing to mitigate that?

We’ve already gained a lot from space. There’s a lot of spin-off technologies that have been invented because we have a space program, such as Velcro. There's a lot of them that we don’t think about [such as freeze drying, modern fire-fighting equipment, teflon, and smartphone cameras].

Space travel has to get cheaper. Today there are companies that are working on space flights, like Richard Branson or XCOR, that hopefully will be cheaper. Right now it’s about $100,000 or $200,000 but once [these companies] get established and there’s competition, I’m hoping that that price comes down.

Fuel will be the game changer. [We need to] disrupt the current propulsion system. The technology we have today is 60 years old. The same rockets [today] are the same rockets that brought Gagarin up and back in the 60s. There are a few companies that are working on things like using microwave, but they're all still at the experimental stage. If we can find something that is so disruptive and revolutionary that make launch really cheap and safe, that will be a game changer.

Cheap satellites are a massive opportunity. Today you can create cubesats [small satellites] for a fraction of the expense the big ones used to be. They’re nano – they’re small and they’re cheaper. There’s also another type of sensor called hyperspectral cameras [which can now be mounted on cubesats]. They can revolutionize a lot of things.  For example, if you’re looking at a terrain that is devastated it can pick out heat, chemical readings. In disasters, with a hyperspectral camera you can potentially find survivors.

The stars could be a startup playground. Computing is getting cheaper, launch is getting potentially cheaper... it used to be government who did this, then it was big companies like Boeing and Lockheed, and now the startup companies can play in the same field. There’s a startup called Planet Labs whose main objective is to have 24 hour monitoring and imaging of the Earth. [We could use it] to leverage agriculture, to leverage security, to leverage climate, every single thing that used to be only that big organisations could do.

Tech doesn’t work the same up there. Because you have zero gravity not all of the principles apply. Made in Space [which made a 3D printer for space] had so many tests with their prototype on what they call vomit comets, airplanes which fly in parabolas and you get a fraction of the zero gravity experience. They perfected the technique and got a contract with NASA. The first one was launched almost two years ago and [in March] the second one was launched.

This is the start of space-age self-sufficiency. Essentially the end goal is not just to 3D print tools, because if something breaks down you have to wait for the next launch until you can replace it, but to print big structures in space using materials from an asteroid or from another body, not us always hauling materials up there.

‘Star Wars’ is responsible for a generation of space nerds. I actually I saw ‘Star Wars’ when it came out at the movie theatres - so that’s how old I am - and that resonated. I have this visceral image of Earth from space and I want to see that for myself. I don’t really think about Mars or going up there to explore, I really wanted to see Earth because Earth is our home and it just felt surreal to be able to do that.