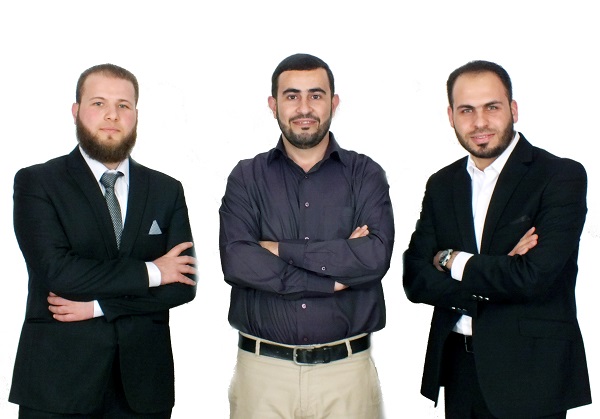 Curing concrete is a tedious process that takes time and a lot of water, but three Saudi researchers have adapted a tried and true method to address the issue - all over a 6am hummus breakfast meetup.

In 2010 Feras Kafiah, Husam Walwil and Mohammed Khalil traveled from Jordan and Palestine to Saudi Arabia, to study at King Fahd University of Petroleum and Minerals (KFUPM), where they began searching for problems to solve.

In 2014 they came up with Concure, whose product is an adaption of the concrete ‘curing blankets’ used in construction in Western countries.

Concure CTO Kafiah had a background in construction, having been the senior materials consultant in one of the mega-projects on the King Faisal University campus during his PhD. He saw an opportunity to tackle a real problem in this sector: the curing process for concrete.

In February 2015, he and his team filed a patent in the US for the water-absorbant powder used in the second layer, and enrolled in the incubation program at KFUPM. 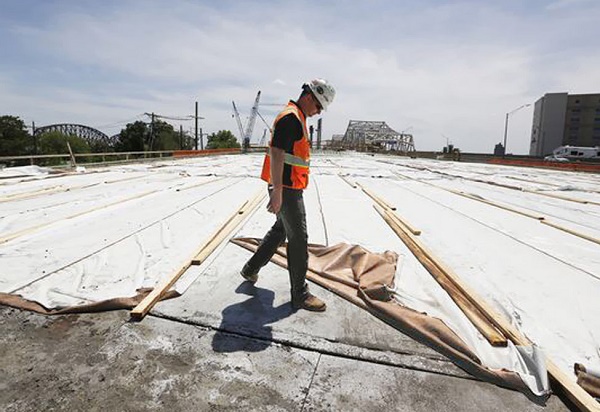 In the US these blankets have been used for some time; Concure hopes to bring them to Saudi Arabia. (Image via Eagle Industries)

The technology Concure has developed is unique in the sense that it cuts the need for water by 80 percent. In a hot and dry country like Saudi Arabia, this is extremely important.

“Curing is the process in which the concrete is protected from loss of moisture and kept within a reasonable temperature range,” according to the Portland Cement Association. It results in concrete that’s stronger and less permeable to water, thereby mitigating cracks which can affect the material’s durability.

“As a general rule of thumb an increase of 20 degrees Fahrenheit [about 6.7 degrees Celsius) will reduce the setting time of a concrete mixture by as much as 50 percent,” according to the association.

Currently, construction sites in Saudi Arabia cure concrete by irrigating the surface of the concrete with water two to three times a day for the first seven days after it has been poured. This not only requires an enormous amount of water, it also requires the manpower to water the concrete on a daily basis.

According to an infographic produced by the trio in 2015, they will target largely contractors, but also precast concrete makers and individuals to a small extent. 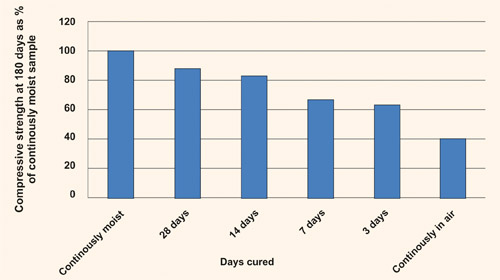 The effect of the duration of water on the curing process. (Image via NBM Media)

The Concure team has created a curing blanket, applied on top of semi-hardened concrete, that is made up of three layers and only requires watering once, in a process known as ‘wet curing’ in the industry.

The bottom layer is a fibre material, such as burlap that allows water to rise up to the second layer.

The second layer is fabric which has been infused with a super-absorbent powder, which is currently patent-pending, which the team says can absorb water within tenths of seconds. Just one square meter can hold up to 40 liters of water.

The top layer is a transparent plastic sheet that allows UV rays from sunlight to “decompose” the polymer chains in the powder slowly over time (polymers are large chains of molecules whose flexible makeup means they can be any kind of substance, be it gooey, strong, elastic or, as in this case, water absorbent). 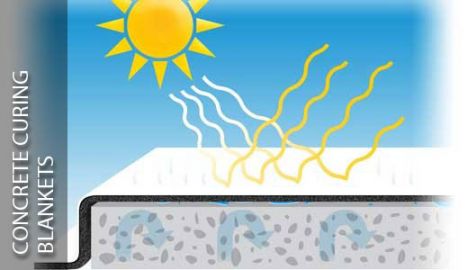 The transparent sheet both deflects harsh heat and provides UV rays to break down the polymer chains. (Image, right, via Raven Industries)

As the polymers break down the chemical makeup of the powder changes and cause it to release the water it’s absorbed back on to the concrete below. The bottom layer stops the liquid flowing away.

Concure can control the rate of polymer breakdown - and therefore the rate at which water is released back onto the concrete - by changing the transparency of the plastic, according to apress release from KFUPM following its Entrepreneurship Institute's Concept to Prototype Competition (C2P) and 2nd Venture Concept Competition (2VCC), both of which Concure won.

The team has developed a final prototype blanket that is one meter by three meters.

“The real blanket will be 1.5 meters by 50 meters,” Kafiah said. “It will be a huge, rolled-up blanket.” Once commercialized, the estimated cost will be roughly 2.50 Saudi riyals (US$0.67) per square meter. The product should be on the market by the end of the year.

The next steps will depend on the offers the team receives. Being based on the Dhahran Techno Valley campus gives the cofounders access to funding, an extensive network of venture capitalists, and the latest technological support.

“We have three options at this stage,” said Kafiah. “We can either license the technology, secure a big investment to build our own manufacturing facility, or establish a startup and sign a partnership agreement with an already established factory that will take care of the manufacturing while we handle marketing and sales.”

The idea has considerable potential in the GCC’s $126 billion construction sector, but it will be going into an industry that’s well established worldwide: multinational engineering firms such as Silka Group and Raven Industries have long had products in the concrete curing field.