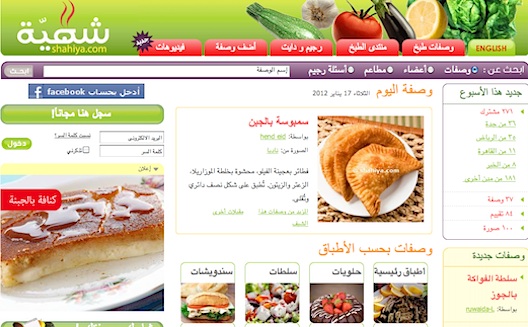 Sometimes becoming the biggest recipe website in Saudi Arabia is not enough.

For the creators of Shahiya, an Arabic recipe portal, creating a cookbook-style iPhone application named “Cook Lebanese” turned out to be a savvy move that diversified their revenue stream and complemented their website.

In launching both the website, in April 2010 and the app in July of 2011, Beirut-based founders Hala Labaki, Daniel Neuwirth, and Carole Hani managed to perform three feats that many entrepreneurs aspire to: they garnered a critical mass of high-quality user-generated content, cracked into the Saudi market, and launched a successful app on the side. Here’s a look at 6 ways in which they created their success:

To do so, not only did they structure the content clearly, but they made sure to carefully vet each recipe to ensure that all relevant information was present and that it was not copied from another site. Labaki, who previously worked developing products at Unilever, ensures that all recipes are carefully tested and that they’re easy to create even for those who don’t cook often.

Insisting on high quality content means not being afraid to reject a bad recipe. “While we have 3,300 recipes now on the site, we have sent another 1,000 back to users to ask for incomplete information or note that they were copied,” says Labaki.

Making it easy for users to comment on recipes and share them on Facebook and Twitter also helped build the Shahiya community. “We were one of the first Arabic websites to integrate Facebook Connect, late last year,” says Neuwirth, who previously worked in social development.

The site also leveraged word-of-mouth marketing, Google Ads, some Facebook Ads, and holiday-specific promotions, offering a new iftar menu every day during the first Ramadan after they launched. “We also went on cooking shows and shows related to women audiences across the region, and kept in touch with our users, sending them emails. You have to make sure that each activity reinforces the activity the others,” advises Neuwirth.

Another element that Shahiya uses to distinguish itself is a focus on nutritional value. Once a user uploads a recipe, co-founder Hani, who is a nutritionist, dissects the ingredients to determine its total nutritional facts. In the Arab World, it’s a particular draw, says Labaki. “There’s a lot of obesity and diabetes in this region, so people are anxious to know the nutritional value of their food.”

This and its user-generated focus distinguishes the site from potential competitors like video-focused recipe tutorial site Zaytouneh, who Labaki says essentially complements Shahiya rather than competing with it directly.

Like many entrepreneurs, Shahiya’s founders set their sights on the Saudi market, because of its large population, high internet penetration, and high GDP relative to the region. To ensure that they would be a successful entrant, however, they conducted extensive user testing to understand what categories readers preferred.

They also discovered that word-of-mouth marketing- their channel of choice- necessitated some testing. While Shahiya’s primary site is in Arabic, Arabic language food sites were initially hesitant to cover them, says Labaki, while the English language sites embraced a new food portal.

With persistence, the website has garnered a heavy user base in Saudi, with over 50% of its now 37,000 registered users now coming from the Kingdom. Ironically, while Lebanese food is a favorite on the site, very few of its users actually access the Arabic language site from Lebanon.

Shahiya has generally managed to tap into expatriate Arab populations living in the U.S., Europe, and throughout the Arab World, by specifically targeting women and mothers who are cooking.

As an example of its ability to serve this specific need in a global market, Labaki tells the story of a popular user in Saudi Arabia. “She was originally Syrian, but had been living in Saudi Arabia for 15 years, and was posting excellent recipes in Arabic. One day, we noticed a review on one of her recipes in English, from Germany. The review said ‘Mom, I'm so happy I found Shahiya because now I don't have to bug you on the phone to get your recipes.’ It was actually her daughter, who was living abroad in Germany. That's when we felt like we had hit on something.”

This past year, Labaki, Hani, and Neuwirth decided to take Shahiya a step further by launching Cook Lebanese. The app, which sells for $1.99 in the Apple store and also has a free version, featuring 101 hand-selected recipes, aimed at a more selective market.

To date, the free version of the Arabic app has seen 160,000 downloads, and hit #1 in the Lifestyle section of the App Store in all GCC countries except for Saudi Arabia, where it ranked #2.

Its success inspired the founders to also launch an app this fall simply called “Adha,” which had 30 recipes for the Eid-al-Adha holiday, which also topped the Lifestyle section across the GCC.

The site and apps, which were both built with the founders’ own seed revenue, are still not cash positive in sum, yet the founders are now seeking investment to scale their products further.

Its fledgling success paints a realistic portrait, however, of the determination and research needed to reach a profitable stage in the Middle East. “You don't know in advance what's going to work,” confirms Labaki. “A lot of our success comes from testing.”

Entrepreneurs looking to replicate their success can take note of her lesson: test, iterate, and test some more.