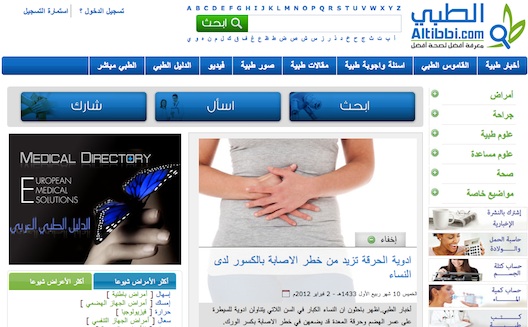 When Lebanon-born, Amman-raised entrepreneur Jalil Allabadi first decided to put his father’s Arabic medical dictionary online, he focused on simply promoting it as a book that would be useful to anyone looking for a list of medical terms in Arabic.

But after a professor at business school in the U.S. encouraged him to develop his business model for the site, Allabadi returned to Jordan to launch Altibbi.com (a name meaning “medical” in English) as a complete online portal for medical advice and education.

With a slew of 3D Arabic educational videos, and direct online advice from doctors, he site now boasts around 90,000 pageviews a day. Yet the process of building a WebMD or HealthCentral-style portal in the Arab World has only just begun, says Allabadi, who eschews a copycat approach in favor of working hard to understand his users’ specific content needs.

As Altibbi continues to grow, it stands to become a definitive reference not just for readers but also for portals such as Supermama, which aims to become the go-to resource for mothers throughout the Arab World, and even local apps like Ekshef, which will provide appointment reservation services at local practices. As Allabadi extends the platform, his biggest challenge may be maintaining consensus- and potentially courting future investment- in a family-run business.

I recently sat down at Turtle Green in Amman to chat with him about expanding the platform and leveraging his family’s support.

How did you create Altibbi?

My dad worked for 15 years to write the first Arabic medical dictionary. He had worked with refugees all around the region, throughout his career at the Palestinian Red Crescent, and his goal with the book was simply to educate everyone about health. But he was a lousy salesman; he just wasn't very interested in selling it.

My cousin, on the other hand, is a serial entrepreneur in Sydney. He came along a couple of years ago and said, I'll help you promote this on the internet. We began working together, at first registering arabicmedicaldictionary.com just to promote the book online. Then, we started adding words that people could click on to understand why they might need it.

That was mid-2009, when I was doing my MBA at Thunderbird in Arizona. Some friends and I drafted a business plan for Arabic Medical Dictionary as part of a class, and one professor said, "I would go work on this right away."

When I came back and hit the ground running, we founded Altibbi as a business. Even today, my dad calls me "The Capitalist."

Now not only is the entire book online, but it's a complete medical portal. The original book had 15,000 terms; we now have 65,000 terms online, along with explanations and symptoms, on a total of 1.2 million pages. We are constantly improving the site; we just added 5000 topics yesterday.

We've revised it to be more patient-friendly and educational, and interactive. We receive 150-200 questions a day that we forward to a network of doctors in the Middle East who respond in about 48 hours.

We also have around 70 educational videos. There's really nothing else like these highly educational Arabic videos on Youtube.

What inspired you to create these videos?

A doctor in our network saw that there were many repetitive questions on the site, and he said, why don't you interview me about this topic and post it? We saw that people loved it, and we kept going with it. Then we starting adding 3D animations, to show models of body parts along with explanations. We were outsourcing it to a talented animator, and now we're in talks with a Dutch company that will provide us with 120 animations to which we'll add Arabic text.

How did you find funding?

All of our funding has been family and friends thus far; we are reluctant to take on an investor. In our field, we have a long-term vision, and we'd have to find the right partner. We don't want an investor to come in who's interested in making an exit in 3-4 years.

How do you plan to monetize the platform?

We have several thoughts. We're looking at advertising, but in healthcare, advertising is minimal in the region. We're also looking at a premium services model; following the Yellow Pages model, since we've also created the first pan-Arab medical directory that lists doctors.

How is your traffic?

The site is also getting a lot of traction from a medical tourism perspective. We have directories in Jordan, UAE, Saudi, Egypt, Palestine, Qatar, and we're adding it now for Lebanon, since plastic surgeons have shown a lot of interest in posting their services to attract tourists.

How do you describe your users?

We've noticed that, while we target anyone who wants health information, our market is primarily educated women in the Gulf. They face a lot of taboos; they feel they can't just ask their doctors questions. We answer any questions, and we create content directly based on what our users ask for and need.

Also, in the beginning, we assumed that users would simply search to find what they needed. Now we're taking an active approach to help people diagnose what they have or need to read about because they might not know.

We're also actively working to determine what kind of content readers want more of, as they might not always directly ask for the sections that we don’t realize are missing. So we listen to doctors explain what people are asking for in person, and we send out user surveys as well.

We have to be sensitive to the region; we can't just copy WebMD, which takes an American approach.

Did you find it hard to get set up in Jordan?

Compared to the U.S., it is a lot harder, but I was prepared for much worse. It took us around a week to register, another week to set up bank accounts, and it was pretty easy to find our office. The hardest part was finding the employees that we wanted. It's still an issue. We now hire fresh grads and train them for 3-4 months; the education burden has essentially been handed to us.

Who is your competition?

Many competitors are jumping into the space. It's a great field, and it's empty. There are two major websites, 6abib.com, sehha.com, that are also comprehensive medical portals, but they are very old. They were started in 1999 and 2001, as doctor-led forums, but they weren't content specific. They have a lot of traffic from those who enjoy forums, but, to be frank, we have better content.

In general, we differentiate ourselves with our tailored content, and we're constantly evolving; we're building a social network for patients so they can follow doctors, and follow posts based on certain interests.

How is it working in a family business?

Family meetings are crazy. But it helps that we’re all experts in different fields. My dad is a doctor, my cousin is a web expert, I'm an industrial engineer, and my brother is a computer engineer and database expert, so we all handle different parts. We don't interfere in each other’s business.

Sometimes being the CEO is tough, but I enjoy it. We have already changed directions a couple of times in terms of strategy, and in terms of setting our roles as partners. It was tough to get everyone on board, but that could happen with any set of partners; we also had to get our 12 employees on board as well. But fortunately, when we talk about business, it's just business.