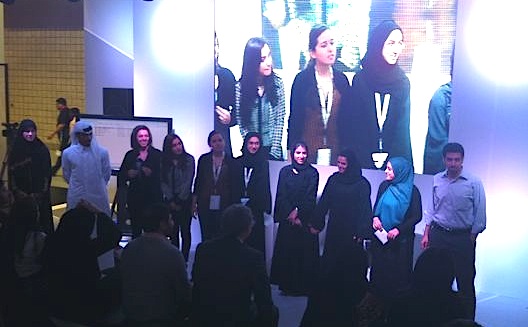 Today, in the Innovation Theatre at QITCOM, Qatar's IT-focused conference, 10 nervous entrepreneurs pitched ideas to a panel of judges, hoping to win mentorship from the competition's sponsor, Potential, and up to QAR 50,000 (US$ 14,000) to launch their startups.

After the crowd and judges watched 20 teams pitch yesterday, they submitted 290 votes in 20 minutes to winnow those teams down to 10 semifinalists. Today, those 10, 8 of whom were women, pitched for 3 minutes each today. Only 5 will proceed to the final round tomorrow.

Mariam pitched Picture Language, an idea for a mobile application that facilitates language learning by displaying pictures from daily life matched with colors, to help users remember words. It will be designed for BlackBerry, iPhone, and Android, targeting language learners all over the world. Marketing will be done via social media and Google ads, and the revenue stream will be through ads and app download charges.

Thuraya pitched PrayerGarden, which rewards Muslim users for praying on time; "The more you pray on time, the more leaves you get on your branch," she explained. It will be designed for iPhone, iPad Blackberry, Android, and Windows, and will generate revenue through ads and by charging for a premium model.

Munira pitched Qat Lab, a laboratory for developing games, which aims to develop A list games targeting the Arab World. She gave a brief illustration of the first game they've developed thus far, Arab Conquest. 42% of gamers are women, she said.

Ziad of heartbeat irregularity detector CardioDiagnostics pitched a new health-oriented platform called Healthy Life Solutions, designed to remind diabetic individuals how to take their medications. He plans to initially launch it in Arabic and English as an SMS-based app, with a smartphone app following later to target younger generations. The third phase will include customized consultation, allowing patients to contact medical experts. To generate revenue, it will start with a subscription model.

Omar and Abdullah pitched a Concierge Service, that would sell airline tickets, siteseeing tours, and travel packages using a web and smartphone application, while also providing offline concierge services over the phone. It will be a membership-based, 24/7 service, offered in Arabic, English, French, and Urdu, and they promise it will be cheaper than its competitors.

Shabina and  Omar, who respectively worked for the Wall Street Journal and Al Jazeera, pitched Doha News, a site that they already run, which curates news in Qatar, where there is little to no local breaking news, they say, despite its having the highest internet penetration rate in the region. They use Twitter to locate good stories, garnering 100K hits a month on their current website. To generate revenue, they plan to sell premium content and use advertising.

Aisha pitched Event.ly, an app very similar to Battuta, a concept that Yahoo! Maktoob revealed in the TechZone yesterday. It is designed to give you information about events and conferences, all in one place, with the option to mark your favorite events, share them on social media, and register and purchase tickets. It will be designed for Apple, Blackberry, and Android, making money through advertising and featured events.

Sophia pitched an Anti-Asthma App, citing the fact that 1 in every 5 Qatari school children are diagnosed with asthma. It will be a website, mobile app, and SMS alert system that would display the amount of particulate matter (PM 2.5) in the air in Qatar, measuring ozone levels as well, using monitoring stations across Doha. They will conduct marketing through offline awareness in schools, online and offline ads, social media, and SMS marketing.

Reem pitched KhatibLine, a site encouraging designers in Qatar and the Middle East to express their creativity by submitting Arabic calligraphy  and illustrations to be printed on t-shirts. Creatives can submit ideas that will get printed once voted on, she explained, and she's targeting people aged 15-35 who are on social media, and will market the site through a voting campaign at first, and, later, a series of one-minute YouTube videos, both of which she hopes will go viral on Facebook and Twitter. Her ultimate goal is to display Qatar's creativity and innovation and unleash the talent of the Middle East, she says.

Last but not least, Ashlene pitched a Multimedia Documentary Site designed to facilitate the creation of documentaries in the Arab World. Building on her experience creating two documentaries, about the rise of Arab hip-hop in the Middle East, and its evolution during the protests, her goal is to build a site that will simply instruct aspiring filmmakers about how to make documentary, leading them through story development, to logistics, to cost. She plans to market the site by creating film packages for potential clients, and hopefully selling the films created, she says.

Stay tuned to hear which 5 made it to the final round tomorrow. Who would you vote for?