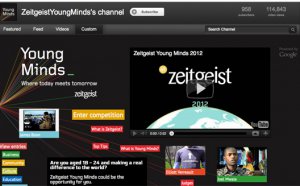 Winners will get the chance to attend Google’s Zeitgeist 2012, an exclusive three-day event, where over 400 influential business leaders and visionaries from around the world come together to share their perspectives on global issues. Speakers have included Professor Stephen Hawkings, Burberry CEO Angela Ahrendts and Google Chairman Eric Schmidt and CEO Larry Page.

All applicants have to do to is upload a one minute video explaining how they are already making a positive impact in the world, before March 26th, 2012.

Brian Magwaro Mogaka, who founded a youth led organization which helps young people from the slums in Kenya make a better life for themselves through activities and work.

Ludwick Marishane, who invented the world's first and only bath using 'DryBath™ Gel' lotion instead of water, to provide an alternative to conventional baths, thus saving water and lives.

Michael Mulunga, who started a poultry project with youths from one of the poorest communities in his region in Nambia, to enable them to generate income for themselves.

Sadiq Miah, the Founding Director of Future Voices International, a youth communication media school that works around the world, who aims to improve social cohesion through expressive media in segregated communities in Latin America.

Sebastian Thiel, who set up 'Its Upshot,' a fashion and entertainment brand in the UK aimed at young people, encouraging them to aim high and stand tall despite any hurdles and obstacles society imposes.

The winners of the 2012 competition will also take part in a series of master classes with the aim of mentoring them to help further their project and get their hands on the latest Google gadget. A select few will also get the opportunity to take to the stage and have their voice heard. Here are the highlights from last year's panel discussion with Martha Lane fox, Jon Snow and our Young Minds winners.