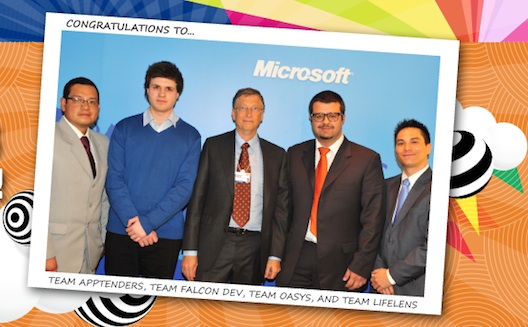 This year, Microsoft is once again giving entrepreneurs a chance to launch themselves on a global stage with its Imagine Cup competition. After Jordan's team Oasys won third place for Software Design, Imagine Cup's primary category, entrepreneurs applying this year could make an Arab startup a regular occurrence at the Worldwide Finals.

Imagine Cup is a multi-faceted competition designed to promote students working with new technologies; each year the competition offers a different slew of challenges in addition to its capstone Software Design challenge. This year the competition has also added two primary gaming competitions, Game Design: Xbox/Windows, and Game Design: Phone, in addition to several other challenges, which students compete in purely online: Kinect Fun Labs, Windows Metro Style App, Windows Azure or Windows Phone Challenges (their reference guide spells out the requirements and dates for each.

While the premliminary eliminations for the Software Design competition completed in mid-March, the competition is now hosting events in each country (last year it was held in 180 countries) to determine who will proceed to the Worldwide Finals in  July 6-10 in Sydney, Australia. Wamda is a partner in the Imagine Cup Gulf, which will host its national competitions this month (dates and links below).

The countrywide events are open to the public, and anyone interested in attending can vote on students' pitches to determine the People's Choice winner. A panel of judges will still be present to choose the final winner who will be flown to Sydney n July.

Teams this year might want to take notes on Oasys's approach. The hard-working Amman-based team won for a four-point interface system that allows quadriplegics to control a computer with a mouse, type, and operate a Wii-mote. The technology was impressive, said Khanafer, but what set them apart was their willingness to test and iterate, even during the four-day Worldwide Final ceremony held in New York last year.

Teams are eliminated over the course of the ceremony, and by the time Oasys made it to the third round, they had already gone to a local hospital in New York and tested their product with American patients who had never seen it before. The team taped patients' responses and presented them to the judges. "It was an amazing achievement," says Khanafer. "When I saw their final presentation in New York, my jaw dropped."

The result was that Jordan was one of 4 teams that received a grant of $75,000. "We are extremely proud of what they've done," she says. "They proved that their product wasn't just a solution relative to the Middle East, it was a global product."

A team from Oman also won second place in the digital media competition last year. So students this year have their work- and their inspiration- cut out for them. While the dates to apply have closed, those who are interested in attending the countrywide events can find their country page on the ImagineCup site, and follow @ImagineCup and hashtag #ImagineCup on Twitter for more information.