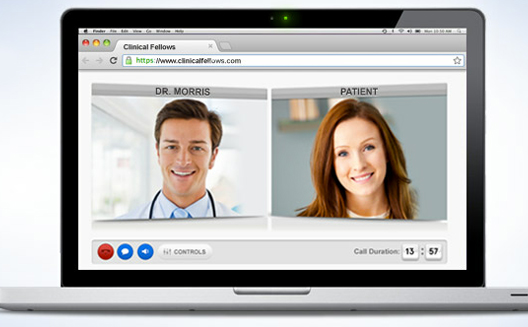 "We want to export U.S.-quality healthcare to the rest of the world," says Ayman Sharaiha, explaining his startup, Clinical Fellows.

The web-based service is designed to meet global demand for quality healthcare, by allowing users access to U.S.-based physicians for virtual second opinions and informational and educational consultations. "Anyone with a laptop and an internet connection can access top-tier doctors from their own living room," says Sharaiha.

The doctors- from Johns Hopkins, Yale, Cleveland Clinic and New York Presbyterian- offer consultations on Clinical Fellows for less than most medical universities and hospitals. Asking for a second opinion directly from Johns Hopkins could cost a patient (in the U.S.) up to $500, says Sharaiha, while heading to Clinical Fellows only runs about $70-$120, without membership fees.

In order to provide services for less, Clinical Fellows taps into a network of younger doctors who are studying a subspeciality, or who might be board certified in one sub speciality and pursuing another. "Often these doctors are underpaid and looking for other avenues of income," says Sharaiha.

Currently, the site has six different doctors working on six topics: internal medicine, cardiology, gastorentology, pediatrics, psychiatry, and gynecology. As it's in beta, the number of consultations per week are currently limited, but since its launch on May 3rd, the site has seen 5,200 unique visitors, and the number of doctors is increasing. Thanks to a partnership with live interpretation company Language Line Services, it also supports 170 languages.

To specifically target the Arab World, the site has partnered with local medical portal Altibbi, which hosts a tab on its site directing users to Clinical Fellows. "We conducted a survey to assess the popular need in the Arab World for such a platform, and we noticed that there is indeed a large market for it," says Jalil Allabadi, founder and CEO of Altibbi.

In line with Altibbi's warnings about online diagnosis on its new symptom checker, Clinical Fellows is also sure to caution users that their platform is not for final diagnoses. "We like to say that it's 21st century technology with 20th century regulations," Sharaiha says. But in fact, he points out, the American Medical Association determined that 70% of consultations are merely informational, meaning that they do not require a physical exam and can be done over the phone or online. And, he points out, 90% of the information required for a diagnosis is derived by taking a patient's history, personal and family history. Given those statistics, the site aims to help with those aspects of the process while making it affordable.

After developing the idea in 2010 during his MBA in the U.S., Sharaiha studied the market extensively and went in search of a technical co-founder. Cycling through 5 different potential CTOs led him to finally find the right co-founder in a fellow Jordanian, Zaid Emeish. They, along with his brother, launched the site 5-6 months later, in November 2011, out of Boston.

The startup is a bit of a family affair: 28-year-old Sharaiha manages the business, operational, and marketing aspects, while his identical twin brother Talal, a physician, manages the medical aspects of the site and sources doctors for the site from his networks. The Sharaiha's father sits on the advisory board, while their sister, a gastroenterologist, also offers consulting services on the site. Far from resulting in a monolithic family view, "our different backgrounds help us to see things differently, that others might miss," says Sharaiha.

The next step for its market in this region is to add a fully Arabic interface, if user feedback indicates demand for it. But for the time being, the live interpretation services guarantee the site's accessibility to the region.