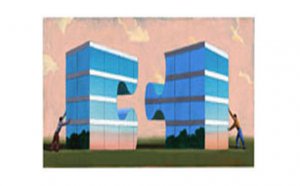 Plenty of merger deals should never happen: Buyers are too often attracted to "false positives" in targets that are overvalued. Less noticed are the deals that get away, but shouldn't, because of "false negatives" an undervaluation based on outdated methodologies that leads to a losing bid. The true value of a target company can be determined only if the buyer looks beyond current core operations to include future potential, argue three M&A experts Alexander B. van Putten, a principal of consulting firm Cameron & Associates and a lecturer at Wharton; Mehrdad Baghai, managing director of Sydney, Australia-based Alchemy Growth Partners, a boutique advisory and venture firm, and a co-author of the book The Alchemy of Growth; and Ian C. MacMillan, a professor of innovation, entrepreneurship and management at Wharton.

"When will we finally close a deal?" The frustration around the management table at Bank X was palpable. The company had just been outbid by its archrival in the pursuit of a key competitor in its rapidly consolidating sector. It was déjà vu all over again.

Only months before, Bank X had gone after the prized local assets of a struggling global player that were being auctioned as part of a restructuring. Its M&A team had felt very confident going into the final round of bidding. The team had completed very detailed financial models and taken into account all synergies to arrive at its final bid. Yet Bank X also lost that chase and to the same archrival.

What's more, these two lost opportunities were just the latest in a series of unfinished deals during the past three years. Some were big and others were small but there now was an unmistakable pattern. The company would set a maximum price based on discounted cash flow (DCF) and it would be outbid. Analysts were asking whether management lacked the courage to make deals. Management wondered whether they were missing something: Were they systematically undervaluing assets for some reason? The often-used justification that Bank X was a very disciplined company was wearing thin, especially since its archrival also had a very strong reputation for discipline.

The company in question is real and its confusion is common. Did it undervalue the deals it pursued and lost? Or did it do well by being outbid? Put another way, how can a company increase its confidence that it is not systematically undervaluing transactions without feeling that it has been swept up in the hype of investment bankers? By the same token, how can it feel more confident that it is not systematically overvaluing transactions?

For quite some time, it has been known that the odds of a successful acquisition are long, yet executives show no signs of losing interest in M&A. Even some companies that eschewed acquisitions in favor of organic growth have thrown in the towel. Witness Dell's $3.9 billion acquisition of Perot Systems in 2009.

Given the continued reliance on acquisitions as an engine of corporate growth, we sought a way to increase the odds of success, by evaluating deals in a way that reveals a more complete and accurate value.

Most of the literature on mergers considers the effects of what we will call false positives, where in the fullness of hindsight it becomes clear that the acquisition was flawed from the beginning. What are often overlooked, though, are the deals that could have been big wins but didn't happen, because of false negatives. By that we mean instances, such as the one faced by Bank X, in which a much-needed acquisition was lost due to analytical and valuation methodologies that we think are outdated.

There are, of course, many considerations that affect the success or failure of an acquisition. How well the target company is integrated into the buyer is key. The timing of the absorption of an acquisition has a particular impact in the technology industry. And cultural clashes that destroy value are hardly unusual when large companies are acquired. Though these and other issues are vitally important, they are beyond the scope of this article.

Instead, our focus is on valuing the full potential worth of a possible acquisition, giving pause to would-be buyers that are too optimistic and giving courage to companies that have been bidding with blinders on.

The problem that we hope to mitigate stems from the pressure to make deals pay off quickly in terms of earnings per share, a goal that creates a systematic bias to discount value creation that is tied to future time horizons. While we understand this natural tendency, we believe that it causes companies like Bank X to systematically lose important strategic opportunities to competitors that are more capable of managing the uncertainty associated with multiple time horizons.

To overcome this bias, we combine two frameworks to create a powerful new lens on M&A that avoids both false positivesandfalse negatives. One framework we use is the Three Horizons strategic model developed by McKinsey. The other is a process called Opportunity Engineering, which instills a different way to look at value.

We find the Three Horizons model useful in defining the full value of a potential acquisition. We do this by analyzing the target's assets and assigning them to the relevant horizons of the acquirer to understand how they add value. In general, the more horizons that a target reaches, the stronger and more valuable it is, because it not only increases current value but also carries the potential for future organic growth.

Since the three horizons represent different time frames and levels of uncertainty, they need to be managed and valued differently. The higher levels of uncertainty associated with H2 and H3 necessitate a valuation methodology that takes into account more than the net present value (NPV) of the target. We call this the Opportunity Value (OV) of an asset. OV allows us to consider the potential upside of an acquisition through a disciplined analysis that is based on range estimates relating to how the future might unfold. Because OV provides a positive view of uncertainty, itcomplements the NPV, which treats uncertainty negatively, and the two together provide an inclusive but not inflated valuation.

In discussions with managers we find that, with rare exceptions, even skillful acquirers do not formally consider anything beyond the H1 assets of a target when arriving at a bid price, although some managers intuitively take future potential into account. As in the case of Bank X, this approach may cause a failed bid due to a false negative. Let's consider each of the horizons in more detail when combined with Opportunity Engineering.

The H1 aspect of a business is generally straightforward and can be valued using discounted cash flow analysis that results in a determination of NPV. This is entirely appropriate because there should be relatively little uncertainty surrounding H1 assets. But, inappropriately, NPV is what seems to often suffice as an assessment of a target company's entire value.

The H2 aspect of a business is very different. It is likely to be revenue generating but may lack a large current positive cash flow or profit stream. It may be possible to generate cash flow estimates going forward, which can be valued and added in part to the NPV. But H2 assets will face uncertainties that raise the specter of false negatives occurring in their valuation. Under traditional DCF analysis, uncertainty calls for increased discount rates, or "hair cutting" the cash flow estimates to compensate for higher perceived risk. This conservative bias tends to severely reduce the full value (if any was considered) of H2 assets. Yet uncertainty, by definition, must also include a positive context that could increase value over estimates. This potential for an upside surprise cannot be captured through strict NPV analysis and it is therefore additive. We call this the Opportunity Value that H2 operations represent to the acquirer. Therefore, H2 value is composed of both NPV and OV. Without consideration of the OV, it is likely that the value of the target company will be underestimated.

As for H3 assets, these are rife with so much uncertainty that using a DCF analysis is impossible. Therefore, H3 assets should be valued entirely on their OV.

To NPV and OV, we also need to add what we call Abandonment Value (AV). AV results from having the option to sell all or part of the acquisition in the future. We find that this is rarely considered in valuations because it cannot be captured through a DCF analysis. Due to its linearity, DCF cannot discount both having future cash flows and not having those future cash flows just as it is not possible to value owning a share of IBM and not owning a share of IBM at the same time, because the two cancel each other out. But we can value owning a share of IBM and owning a put option on that share. In that case, the two are additive. The put option adds to the value of owning IBM because it protects against downside losses. In like manner, the Abandonment Value of an acquisition adds to the value of the acquisition because it reduces the potential for downside losses.

Let's apply the same logic to the latest Bank X acquisition that was lost. If Bank X had bought the target for $800 million, its final bid, would it have been worth nothing the next day? Of course not. Bank X would have had the option to sell off the target if things did not go as planned. Even selling the target at a loss has value because Bank X would get back some of its investment, which could be redeployed elsewhere.

If this seems perplexing, consider whether there is value in having Bank X sell the target for $500 million. That would represent a loss of $300 million, but it also gets back $500 million. The opportunity to get back some or all of the investment creates the AV. A basic notion of what the AV of an acquisition could be worth can be arrived at using online option-pricing calculators that value financial put options. In the Bank X case, the ability to get back $500 million two years after the deal closes generates an AV of approximately $17 million. If one were to assume that the acquisition could be sold for $650 million two years later, that would produce an AV of approximately $49 million. If Bank X had used this analysis and increased its final bid to $849 million, its offer would have eclipsed the $840 million that turned out to be the winning bid.

As a result of thinking differently, we arrive at an expanded sense of value. Total value = NPV + OV + AV. Calculating OV is a bit more difficult there is no proxy for it in financial option pricing and a discussion of its derivation is beyond the scope of this article. What readers can take away is the mindset that H2 and H3 assets create value beyond what is captured in a DCF analysis.

So what went wrong at Bank X? In our view the problem was the exclusive reliance on NPV as the measure of value. This caused Bank X to overlook or underestimate the potential value hidden in the target's H2 and H3 businesses. Bank X's incomplete analysis of value tied to its discomfort with, and resulting avoidance of, uncertainty