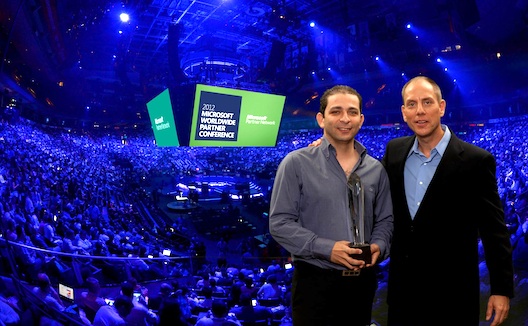 This week, OMS won an award for their role in a different kind of Egyptian revolution, one that took place in its oldest commercial bank. Of 3,000 global entrants, the Egyptian software company was named 2012 Microsoft Country Partner of the Year for Egypt for its creation of new cloud-based solutions for the National Bank of Egypt.

For the 114-year-old bank, the oldest in Egypt, it was a much-needed overhaul of its existing IT infrastructure that allowed for faster testing, more centralized management, quicker deployment, and lower costs. Microsoft's award is a nod to what is now one of the largest private cloud-based systems in the entire region, says founder and CEO Ahmed Kabeel. "This has set a benchmark for us."

Cloud-based systems may now be in demand in Egypt, but the trend is global. "90% of Fortune 500 companies are shifting to cloud solutions, which allow banks to focus on their core business and lower costs," says Kabeel, by paying a monthly fee instead of investing heavily in hardware infrastructure.

After demonstrating their prowess with the NBE project, which the bank's CIO Ihab Elwzan said "significantly minimized our operational costs and increased our business productivity," OMS now has several other deals in the pipeline with other large banks in Egypt and the region.

This current success is a far cry from their initial launch in Cairo in 2000, with $5,000 in seed money and a staff of two, Kabeel recalls. But their success, he says, even in during the post-revolution economic downturn, has been thanks to a focus on research & development, expansion into Qatar and the UAE, and a willingness to "innovate in our business processes and offerings to respond to this climate."

As Kabeel has mentioned before, focusing on regional expansion outside of Egypt is what kept the company afloat during the worst of times after the revolution. "We have achieved revenue growth over the past two years, and expanded our business in the region, to balance with our growth in Egypt," he says. "It's definitely something we're proud of."

Yet OMS's award for a large local project may signal a trend of business opportunities cropping up within Egypt, thanks to a newfound need for economic efficiency as well as security and oversight. Reinvestment in Egypt's tech entrepreneurs will hopefully produce more minds capable of leapfrogging outdated systems to bring local infrastructure up to a global par.