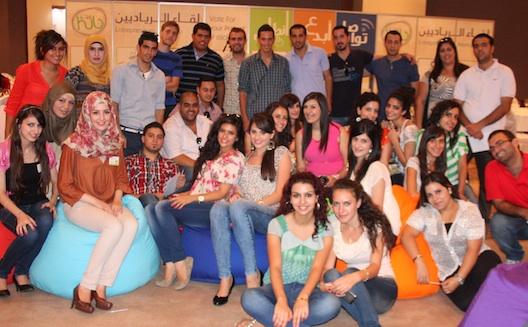 Sitting on brightly colored bean bag chairs, the young techies simultaneously texted, tweeted and Facebooked, listening to a global lineup of speakers who shared their experiences and gave advice about breaking into international markets with an innovative tech idea.

“Creating and sustaining these kinds of hubs are vital for helping young entrepreneurs shift their thinking from local to regional to global,” said speaker Wael Manasra, a member of the Palestinian diaspora who launched internationally competitive international calling business ChitChat Communications at the age of 25.

A major highlight of the event was the ten young Palestinians who had an opportunity to pitch their ideas to a cheering and whistling audience. While most participants ranged from ages 18 to 24, one of the most memorable ideas came from a 14-year-old who wanted to build a smart phone app called “Never Lost” to track your valuables.

Ihab Jabari from the USAID Compete project, which supported the event, presented the first prize (laptops) for the best team to “Liberation Gate,” an online gaming idea. “We are not only instilling hope in the minds of the young entrepreneurs, but also encouraging them to take serious steps to build their ideas,” he emphasized. “The Compete project will work hard on all levels to support the Palestinian entrepreneurs in building new startups and “Hi-Tech Hub” has been established to serve this purpose.”

Most of the major players in the Palestinian tech scene came together to support the event, including  IConnect, Peeks, PICTI, University Centers of Excellence, Leaders, Sadara Ventures, and the USAID Compete project, which is designed to strengthen the economy in West Bank/Gaza through investment in key sectors.

Sami Shalabi, a software inventor and entrepreneur who now works for Google in California, gave some of the best advice of the night (as founder Feras Nasr also mentioned):

Building on that point, USAID representative Ghassan Al-Jamal added, “it’s ok to spend your time chasing a dream because at the end you will succeed, either by having your own company, or at least by learning from your mistakes.”

Hopefully this event and others like it will help spread a culture of entrepreneurship among young Palestinians and ignite a flow of ideas that could eventually materialize into actual companies. Ramallah is quickly gaining a reputation as a regional tech hub, attracting bright minds and new investments, as the New York Times recently acknowledged.

Building on this reputation, the inaugural “Hi-Tech Hub” managed to match the passion, intelligence, energy and tech-savviness of young Palestinians with the breadth and depth of experience of successful entrepreneurs from the diaspora to create a stronger, more innovative IT community.  As the community looks ahead to more hub events, it also poses a challenge to local aspiring founders—how can you take your idea to the next level?