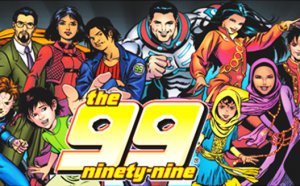 Crescent Enterprises, a subsidiary of the UAE-based Crescent Group, announced the acquisition of an equity stake in the Teshkeel Media Group (TMG), acclaimed developer of the comic superhero series The 99. The acquisition was reported by Business Intelligence Middle East (BI-ME) and allows TMG to continue their planned production of Season 2 of the animated series.

The 99 series showcases superheroes that reference Islamic culture and society and express universal values in their struggle to battle the forces of evil. While creating the story has been controversial in different markets, its message has been well-received globally.  President of the United States Barack Obama, praised the series in 2012 as “one of the most innovative ways” to spread the lessons of peace and acceptance to the world’s youth.

After years of developing The99 series and unique brand, TMG is now poised for impressive growth following its launch this year. As the series airs across the Middle East, TMG is looking to spread its message to other regions as well, and this acquisition just might give TMG the boost it needs.