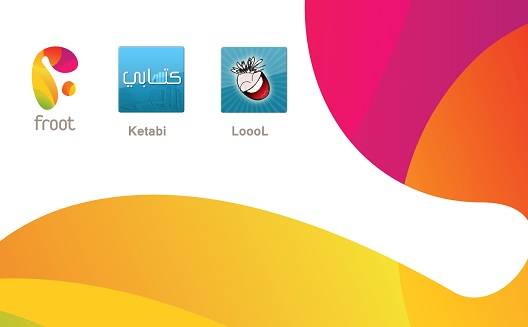 In Saudi Arabia, where smartphone penetration has reached 60% according to Google, pivoting into the mobile app market seems a no-brainer.

Froot is focusing on facilitating Arabic user-generated content in different segments, including e-books, social networks, and lifestyle. While the content between internet penetration in the region and Arabic content production has closed, Froot hopes to boost Arabic content in new realms with two new apps.

The first, Loool, is a new joke platform that allows users to upload, share, and react to jokes in real time. A jokester’s social network, Loool has already attracted over 51,000 users since its launch with more than 150,000 jokes shared between users and is available on both iOS and Android platforms.

There are similar apps that exist in English, but this is the first app of its kind in Arabic. Al-Khaldi points out that most other joke apps are only used “offline” where content is posted and left on the app, not allowing users to communicate with each other in real time while jokes are posted.

Inevitably, some users post jokes that target specific countries or communities, and Froot has faced a few problems with inappropriate jokes. But, for the most part, Al-Khaldi reveals that people accept being a part of a joke, and will often return the favor, keeping the app light-hearted. “Come on people, let’s laugh,” Al-Khaldi smiles as he reflects on some of the jokes he’s read.

Branching into a more serious realm, Froot has also developed Ketabi, an Arabic e-book library that allows users to download e-books for free or for purchase in Arabic through their mobile device. The app is currently available on iOS, but Froot has just announced a deal with BlackBerry to have content available on BB10 as well.

“We want to enhance the content in the Arab world, and we don’t want to be the kind of company that runs applications just for the sake of generating revenue without having a forward vision,” Al-Khatri proudly states. He admits that there are some serious competitors in the market, but OTS welcomes some healthy competition as long as the overall presence of Arabic content reaches new heights.

Perhaps Ketabi’s most unique feature, apart from live iChat support, a bookmark function, and the ability to read a table of contents before purchase, is that new authors can publish their books on Ketabi’s platform without being backed by a major publisher. Froot has deals with a few major publishers and currently has over 300 available books, but they also welcome new authors to apply online to sign an individual deal with Froot. Authors can publish their work through Ketabi and reach a revenue-sharing deal with the company.

OTS is preparing to launch several other apps later this year and their teasers are located on the Froot website. While some jokes may not translate for everyone in the region, Froot Apps will continue to develop avenues for Arabic speakers around the world to express creativity.