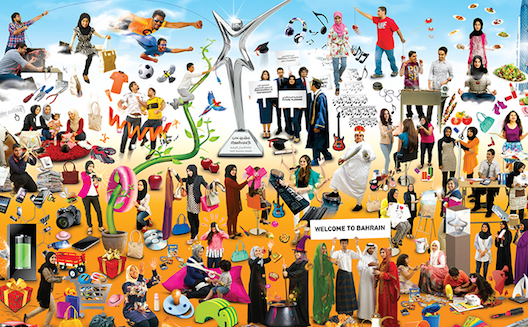 For those curious about up and coming startups in the Bahraini entrepreneurship community, new business plan competition Mashroo3i, launched by Tamkeen (Labour Fund), revealed some of the country's top young entrepreneurs this summer, as youth between 16 and 23 competed to prove the value of their ideas between March and July.

After submitting their ideas to enter the competition this March, sixty teams were shortlisted and given one month to fully develop their business plans under the guidance of mentors who represented a cross-section of seasoned business executives.

Judges then evaluated the quality of the business plans and selected 25 teams to continue to the final prototype phase, which was designed to simulate the real life experience of operating a business. Each team was allocated an exhibition space to set up their business, design their window dressing display, decorate their shop gallery, market their product or service; and of course, generate sales, all over a three-day weekend from July 12th to 14th at the popular Bahrain City Centre mall.

The final three teams were chosen jointly by judges and the general public, over 7,000 of whom voted for their favorites through the competition’s Facebook page.

The top 3 overall teams were:-

Prizes were also given in seven individual categories:

Displaying all the tenacity and zeal characteristic of a budding entrepreneur, Mashroo3i contestant Yousif AlSayegh reached out to Wamda to tell us about his team’s enterprise, GoalShare.

GoalShare is a sports website that allows football fans to forecast football results, gaining points and prizes in correlation with their forecasting track record. Users can also share their forecasts on social media site such as Twitter and Facebook.

Yousif and his team members, Ali Molani and Mohammed Al Awadhi, came up with the idea to give youth a more interactive platform to engage with sports. The team created a prototype for the Brazil-Egypt football match that took place at the 2012 London Olympics. The website is yet to be officially launched, but the GoalShare team is currently working on a mobile app.

Although GoalShare was not a winner in Mashroo3i, Yousif’s team managed to secure seed funding from a Qatari investor.

Speaking of his failures (current and previous) and entrepreneurship lessons learned, Yousif’s resilience and positivity are both refreshing in the context of an Arab culture which struggles to embrace the F-word; and an indicator that younger generations are taking a page from successful entrepreneurs like Bill Gates and Fadi Ghandour, who didn’t necessarily get it right the first time.

In the next phase, Tamkeen plans to identify the most lucrative and market-ready Mashroo3i ideas and support them through its existing programs to turn them into viable operational enterprises.

Mashroo3i team presentations and other footage can be found on the competition’s YouTube channel.