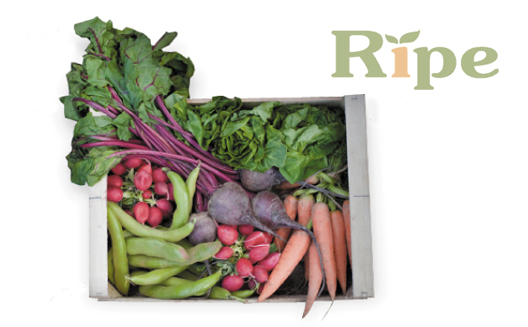 It isn’t easy being green – especially when you’re in a desert. The UAE is fertile ground for local businesses, but when Becky Balderstone started setting up Ripe in the summer last year, she faced harsh terrain.

Grow, eat, and support local – Ripe’s ethos stresses on the benefits of organic and sustainable farming. What started as selling a box of seasonal fruit and vegetables to fill the market gap of organic, locally farmed produce has now grown into farmer’s markets in Dubai and Abu Dhabi, online orders, and more recently, a dedicated Ripe Farm Shop in Dubai.

Ripe works with six local farms around the UAE, with the goal of supporting local businesses as much as possible. She says that while organic produce was available in UAE markets long before she set up shop, there was a perception problem that needed to be addressed. “Not many people were aware of how many organic farms there are in the region, and a lot of consumers didn’t have the opportunity to get produce,” says Balderstone.

“Supermarket chains had a very small range of local produce, and were making money off of international organic produce without labeling it as organic,” she continues. “The Organic Café was here far before I started, but their produce is a lot more international because it’s such a big operation.”

The opportunity was fresh for Ripe; Balderstone, with the help of her husband who works in the agricultural field, found a number of farms that passed the organic practices test, and just as importantly, the taste test. “It’s pretty hard with the weather in the UAE to produce good quality, but these farmers have a lot of experience, they’re certified, and they’re passionate about organic farming,” says Balderstone.

When Ripe launched their farmer’s market, Balderstone says the response was overwhelming, as demand for organic, locally farmed produce flooded in. The Ripe box remains a popular mainstay, stocking up to 10 different kinds of produce. “We pop a recipe in the box that really supports what’s in season,” says Balderstone. “People love the fact that they become more creative in the kitchen with vegetables they don’t usually use.”

Ripe primarily stocks vegetables, as fruit is harder to come by in the UAE, but Balderstone says they are looking at working with farms in Jordan, Lebanon, and maybe even Sri Lanka to meet a growing demand for the sweeter produce. The Ripe shop in Dubai sells local and international produce, including eggs, yogurt, cheeses, chutneys, jams, spices, and even seeds for those looking to grow their own gardens.

As the summer wanes and cooler, farmer-friendly weather resumes, Ripe will set up more markets across Abu Dhabi and Dubai, and relaunch their online ordering system. This weekend, in fact, the company is expanding their Food & Craft Market, open on Saturdays from 9am to 1pm, to a new venue, The Courtyard in Al Quoz. Balderstone says they will also improve their home delivery and cash-on-delivery service to cater to growing demand from Emirati families who tend to shop in larger quantities than Ripe’s main customer base, expatriate families.

Balderstone is also setting her sights on education this year, working with a number of nurseries, schools, and government bodies to spread the word on the importance and benefits of organic and local farming, and healthy eating.

In just over a year of operation, Ripe has carved a much-needed space for itself in the local food industry, bringing local organic farming into the spotlight. The encouraging response is indicative of the void that existed in a market crowded with expensive international produce. As it turns out, the UAE was indeed ripe for Ripe.