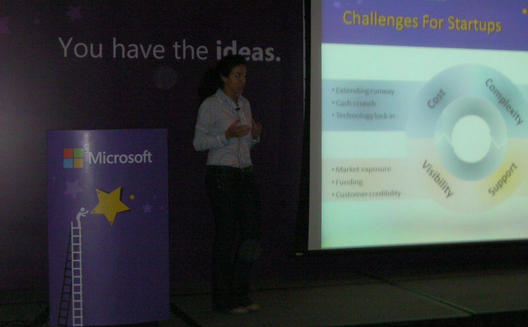 That’s all changing, as Microsoft Egypt has created what’s best described as a start-up evangelist role, and had a re-launch event for BizSpark in Egypt on September 30th.  At the event, I spoke with the evangelist herself, Azza Eissa, who I’m glad to reveal is much more pleasant to look at than Steve, without a patch of sweat in sight.

“BizSpark is not new of course, but the company will now put the proper local resources in place to support Egyptian BizSpark members.  We also have a pioneering localised Startup incubation program, the first of its kind globally, and the pilot is already running here with 6 teams,” Azza explained.

BizSpark provides a raft of developer resources for free, for qualifying software startups. To qualify, the startup has to be a privately held, registered company, that’s been trading for less than 5 years and is making less than US $1 million in annual revenue (6 million EGP).

The Start Up Program is also free, but it’s more for seed stage software startups, as companies don’t have to be registered or trading. The program provides business and technical training from local providers and of course Microsoft’s global resources, and lasts about 2.5 months. Eissa is busy forming partnerships left, right, and centre.  If you want to apply for the next cycle, you can email her directly. You can apply to BizSpark on their website.

This is all, of course, in preparation for Windows 8 in general and Windows 8 Mobile in particular.  Microsoft is playing catch-up to Apple and Google in the mobile operating system market, so it’s no surprise that Microsoft Egypt is also running a mobile apps competition for individual developers.  The Windows 8 Store is open to Egyptian developers for paid/free apps, and the competition ends at midnight on 31st October 2012 Cairo time.  The developer who’s published the most apps (with a minimum of 8) will win a Samsung Slate 7 tablet, and the second prize of a Windows 7.5 mobile phone will fo to the developer with the second most apps published (minimum 4).

With such a tight deadline it’s obvious Microsoft is more interested in quantity than quality, so get those “Hello World” apps published!  There's no URL currently, so for full details, email Walaa Atef.  You also have to email him the Windows Store’s confirmation email to have your app counted in the contest.

The event itself was okay, though it ended with an excellent session by Mohamed Radwan explaining the differences between the Agile and Lean methodologies.  Most people in attendance were developers interested in Windows 8 and any support available from Microsoft Egypt.  Five out of the 6 Flat6Labs cycle 2 companies were there, and so was the TellUs team.

Nearly everyone wanted access to a Windows 8 development machine, and Eissa and her team were happy to oblige.  Problem is there’s only one machine in Egypt, so perhaps Microsoft’s love of Egyptian developers hasn’t fully blossomed yet.

Eissa conceded that Microsoft Egypt as a brand was lagging behind the Egyptian Google team, who’ve been perceived to champion Egyptian entrepreneurs.  She’s not fazed however; Microsoft has successfully played catch-up before. ”We’re slightly behind, but in my new role I will be able to coordinate between the various startup initiatives and tools already present or coming.  Overseeing all the strands and providing a unified focus is really what’s new,” she clarified.

I would say that what’s new also is Eissa herself.  Naturally, she has a background in tech, and worked asa freelance business consultant, but she’s also quite the bohemian; we’d first met when she was helping out at the Darb1718 art centre. This mix of traits is not common regionally; neither is her near permanent smile when anyone talks to her.

So it might be a little ironic to say: in the global war between corporate tech behemoths being played out in microcosm in Egypt, the company that gets ahead locally might be the one that has the employees with the best people skills.