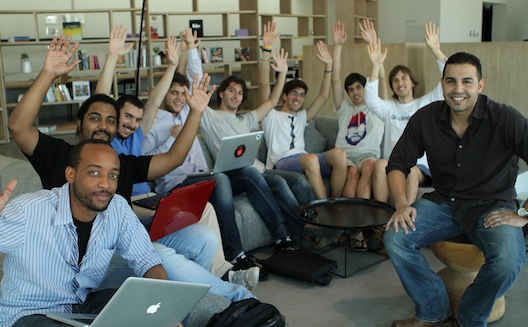 There was a stark sartorial contrast between investors in suits and the more casually-clad entrepreneurs at the Make Business Hub last week during Seed Startup’s very first Demo Day – but both were there with one purpose in mind: investment. Seven graduate startups from the Dubai-based accelerator pitched their investor-ready products to local and international angel investors and venture capitalists, and judging by the networking session that took place afterwards, there was plenty of chemistry.

“You don’t expect that deals will actually close on Demo Day, because the purpose is to connect startups with investors and they have meetings later on,” says Rony El-Nashar, managing partner at Seed Startup. “But not only did all our startups schedule meetings, one of them actually secured a commitment on the day.” Rasello, the Tanzania-based consumer management and business communication platform, secured an investment on Demo Day, while the six other startups have all set up upcoming meetings with interested investors.

As El-Nashar watched from the back of the room encouraging the entrepreneurs during their presentations and warning them when they weren’t speaking directly into the mic, the seven startups showcased their ideas to investors from all over the region, and the world:

“We had investors fly in from all over, from Boston, from Bahrain, and a few others,” says El-Nashar. “We invite investors from all over the place, and even if they can’t make it, we connect them with these startups – so this isn’t just about their attendance on Demo Day. Our network has to be huge, and it is.” The only thing that perhaps was missing were any female founders.

The startups have been incubating in Dubai over the past few months, and all of them are already making returns. “We focus a lot on traction,” says El-Nashar. “In order to build a real business, you have to show investors that you have traction – for example, Metwit have 10,000 users already! Some of the feedback I’ve received from investors is that these are world-class companies.”

As they graduate from the Seed Startup program, the companies will continue to explore their relationship with their incubator, and in some cases, even look at setting up shop in the region. “I’ve invested in every single one of these companies, and I’m on the board of all of these startups,” says El-Nashar. “I believe in them all, they’re all amazing companies, and I have big hopes for all of them.”

The September 2012 edition of Demo Day was Seed Startup’s first, combining graduates from its first two programs. El-Nashar says they’re in the process of searching for the next batch of exciting and innovative startups for the next program, which will start in January 2013.