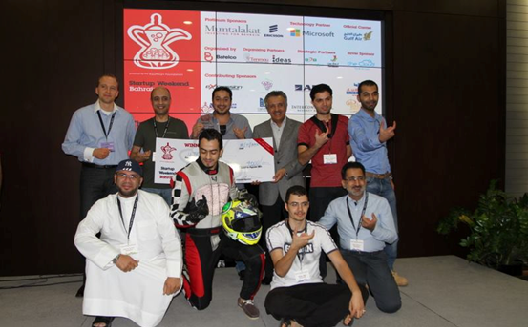 Nine high-energy teams competed around the clock in the 54-hour challenge to win cash, get startup support, and earn a place among Bahrain’s leading techpreneurs.

Following an opening address from Startup Weekend Facilitator Jaroslaw Bialek—who flew in especially for the occasion—a number of aspiring entrepreneurs presented their business ideas to the audience in the form of 60-second idea pitches. Attendees voted for the top ideas and then split off into teams.

After taking an inventory of team skills, and assessing what skills the budding venture needed, responsibilities were divided to leverage what each team member had to offer. The teams were then coached through an intense caffeine-filled 54 hours as they took shifts to develop their business ideas in preparation for the final pitches.

The rival teams were each given five minutes to present their business plans in front of a panel of judges composed of experienced business leaders. The teams were reviewed based on three equally-weighted criteria: Business Model, Customer Validation, and Execution.

Following in-depth and laborious reviews, the judges determined the winners as follows:

1st Place: Winning BD 4,000 ($US 10,610) was U Track- a free mobile app and website that allows users to live-stream motorsport events using a choice of camera feeds on the track and on driver’s helmets, and to interactively view a race in real time.

The three winning teams will also be given free incubation services by Bahrain Development Bank (BDB) and free Cloud Services from The Cloud W.L.L.

In addition, Tenmou will review the nine final presentations, which were recorded, to identifying ideas they deem to have economic potential. Tenmou will then fund them with up to BD 20,000 ($US 53,050) to develop and launch their business.

uTrack Team Leader, Hasan Al Doy, a 32-year old motorsports enthusiast, software developer, and engineer since 1996—before the internet was even introduced to the GCC—says the inspiration for uTrack struck him while attending a racing event.

Incidentally, Hassan’s fellow uTrack team member, Ali Mahmood, owns Karting Mania, which sells motor racing accessories—including the cameras used by uTrack. Such is the beauty of synergy and a cross-pollination of ideas in Bahrain, the home of motorsports in the Middle East.

Next year, I expect to see uTrack and others return to Startup Weekend to share their entrepreneurial adventures, successes, and failures with a new batch of aspiring entrepreneurs.

In fact, many of this year’s coaches, which included the usual bankers, business executives, and tech giants like Microsoft, were also Bahrain’s local young techpreneurs. Among them were:

In just two short years, it seems that Bahrain’s tech scene is really beginning to snowball.