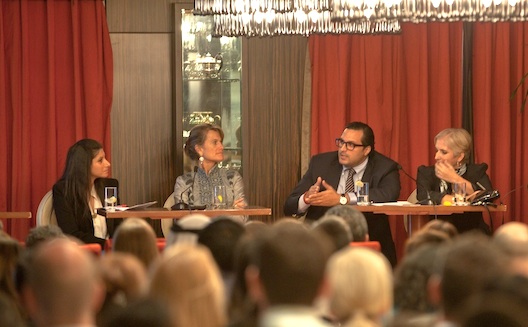 In Dubai, a city that is sometimes referred to as ‘soul-less’, over 150 social changemakers from across the Gulf gathered at the Capital Club in DIFC a couple of weeks ago to discuss how our models of social entrepreneurship and philanthropy can evolve.

At a DUBAI+acumen event titled "Social Entrepreneurship & Philanthropy: Synergies for Change," Jacqueline Novogratz, the founder and CEO of non-profit Acumen Fund brought together advocates for social entrepreneurship, entrepreneurs, and social enterprises to discuss how to evoke regional and global change.

Novogratz praised volunteer-led DUBAI+acumen for being one of its most active chapters globally, and stressed the importance of dignity in helping the poor to break the poverty cycle, and the need for patient capital, warning that, “success could take as long as 15 years.”

Acumen Fund, which works to alleviate poverty, has indeed worked steadily and slowly since 2001 to invest more than $75 million in social enterprises and provide over 80 million people in South Asia and Africa with critical goods and services.

To highlight an example of the type of enterprise Acumen empowers, Novogratz described Husk Power Systems (HPS), an organization in India that uses discarded rice husk to generate clean, safe and efficient electricity in some of India’s most remote communities where 80 to 90% of households lack electricity.

HPS currently serves 150,000 people across Bihar, working to reduce indoor air pollution, emissions, and the amount of time women spend collecting firewood while increasing the amount of time children can study. In the next five years, the company aims to deploy 2,000 plants and improve electricity for 5 million people.

Following the keynote, I was privileged to participate in a panel which included Ms. Novogratz, Masood Razzaq, Founder and CEO of Goodgate, and Clare Woodcraft, CEO of the Emirates Foundation. Panel moderator Danish Farhan, CEO of Xiché Holdings, launched the discussion posing the provocative question: "Is philanthropy dead?”

Touching on another hotly contested issue, Farhan asked: "Is profit still taboo when it comes to philanthropy?"

I am personally frustrated with grants that stipulate no "revenue-generating" activities, even if that means an initiative will utlimately not be financially viable and will be doomed for donor-dependency.

To quote a well-articulated argument by “Uncharitable” author, Dan Pallotta, “We have this total double standard... where we blame capitalism for creating these huge inequities in our society, and then refuse to allow the nonprofit sector to use the tools of capitalism to rectify the situation.”

Markets are demand-driven, so isn’t it more empowering to engage consumers? In the long-term, I wholeheartedly believe that the best way to address poverty and economic disparities is through financial inclusion, not charity.

Making Change in the Arab World

The panel also touched on the key challenges for both philanthropy and social entrepreneurship in the region, including access to funding, restrictive and bureaucratic government policies and legislation, and how competition stifles collaboration.

Several non-profit and social enterprise exhibited and presentated their approaches, including:

4. C3 – Consult and Coach for a Cause- a non-profit initiative aiming to unleash the potential of social ventures and maximize their impact.

Indeed, to echo Ms. Novogratz’s words, “The most radical thing we can build in a cynical world is hope." Here’s to hope...