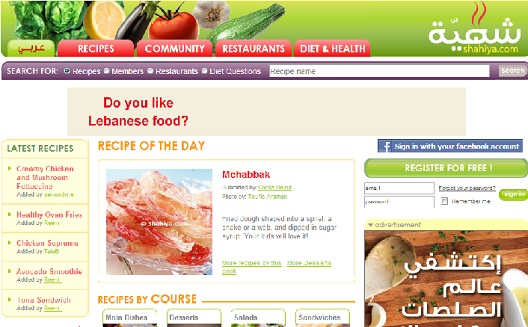 Fresh off of a round of Series A investment from MEVP, Shahiya is looking into new growth models as it continues to tackle the user-generated food recipe market in the Arab world.

With a particular focus on women in the Gulf region, the company collects, reviews, and posts recipes shared by online and mobile users across the region. Led by Hala Labaki, Daniel Neuwirth, Carole Makhoul and Cesar Gemayel, Shahiya lists over 6,000 recipes in both Arabic and English.

Since Wamda spoke with Labaki at Arabnet earlier this year, Shahiya, which initially launched in April 2010, has branched into mobile and is soon heading into the tablet market. Now, with MEVP’s investment, Shahiya has launched a new blog and hopes to add new features to their website that will allow users to generate and share more content.

The website's blog, which launched just a few months ago, offers community posts on anything a cook might need to know: how to erase unwanted odors from the kitchen, which tools are best for certain cooking techniques and even how to make the famous McDonald’s apple pie at home. The blog and an emphasis on social user-generated content reflects the platform's goal to be a comprehensive enabling platform for home cooks who can upload and share their own recipes.

Labaki explains that although Shahiya is based in Lebanon, a vast majority of their 50,000 registered members come from the Gulf, mainly women and mothers. Despite a focus on Lebanese food with the launch of its Cook Lebanese mobile app last year, Shahiya hasn’t seen much traction in the Levant; part of the reason, Labaki says, it that users here aren’t as attracted to Arabic content as users in the Gulf. Thus far, Shahiya has seen a majority of their initial audience from the Gulf and Iraq. Some home chefs have even added over 200 recipes to the platform, a testament to the appetite of their users.

Now, to expand into the Levant, the site has gone live in English.

More than half of Shahiya’s users access the platform using a movile device. Their app which has seen over 250,000 downloads on iOS since July this year (not to be confused with their Cook Lebanese app, which launched in 2011), yet the company is still determining how they will monetize the app.

In the meantime, they are focusing on gaining further traction by designing a tablet application that will make it easier for cooks to have Shahiya recipes in front of them while cooking in an attempt to supplant traditional cookbooks.

To enhance the sense of community on the site, Shahiya is also now allowing readers to add contributors to their list of favorite cooks, and receive e-mail updates when a new recipe is uploaded.

One of the major challenges the site has faced during its growth phase has been working with a user base in the Gulf, while being headquartered in Lebanon. Labaki says there are ways to address the distance, including traveling back and forth, but the company has made a choice to keep its office in Lebanon despite a lack of traction in the local market.

Another challenge, one shared by nearly all young startups, is attracting talent. Especially for a business based fully online, Labaki notes that they are constantly “looking for the very rare pearl you find from time to time.” With a growing team of 11, Shahiya has been very busy honing their marketing and content strategies and adding new web features. Their Chief Technology Officer is now even moving from the U.S. to Lebanon to work on the project full time.

With other competitors such as Zaytouneh and Fatafeat growing in the region, there may be some competition down the line, but Labaki says, “for the next 5 years there will be plenty of space for everybody, because it’s a fast-growing and huge market.”

It will be interesting to see whether additions to their online platform and mobile app, their introduction of Shahiya for the tablet, and a possible entry into video recipes (only hinted at by Labaki) will help them to expand their Gulf-focused marketing to the rest of Arab world.