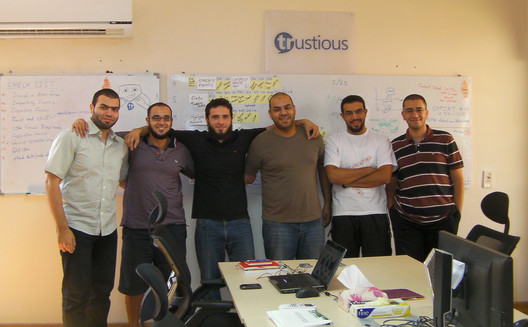 I may have seen the "next big thing," i.e. the next startup with the potential to be a Twitter or an Instagram. To be regionally precise I should say the “first” big thing, as Egypt and the region have not yet had a Pinterest let alone an Instagram. It's a review site called Trustious. Review sites are now plentiful, but nothing quite like Trustious has come out before.

Trustious is the brainchild of Omar Salama and Yusuf Saber, who are the founders along with Mostafa Abo Samra. Trustious differs from most other review sites, indeed most other startups, in that it's built on hardcore science. This may have been evident to you from the name, which doesn’t really roll off the tongue, but everything else is scientific in the good way.

Secondly, all the reviews are 100% user-generated, and not only can you can rate the reviews, you can also “trust” another user.  This is where the science comes in. The team have employed recommendation algorithms so that when you look for reviews, they’re presented to you using your own personalized ranking system.

The rankings are based on TEST, which stands for Trust, Experience, Similarity, Time.  In brief, if you trust someone, or they’re experienced in that category, or they shares similar interests, or the review is newer, then those factors will weight that person’s review higher for you. Based on the internal AI and IA, Artificial Intelligence and Information Architecture respectively, the system will also highlight the three reviews that are most relevant to you.

The science doesn’t stop there. Nearly all the team founders have Masters degrees. The walls of their office in New Cairo are covered with action boards, each one charting a different aspect of the business plan. I’d honestly never seen so many action plans and checklists before, and joked with Omar that the German influence was obviously showing (most of the team are German University in Cairo graduates). He laughed and said they also aim to “vanquish” all their targets.

The website itself is modern, with a fresh functional design, although there are still some bugs as it’s still in beta. The team started in Februrary 2012 with a seed fund of 1 million EGP (167,000 USD) from friends and family, many of whom are well-known business people and certainly no fools.

Yusuf stressed to me that they only invited people to invest if they wouldn’t be harmed if the worst happened and the business failed, but general confidence in the team and idea were high, so many invested between 50,000 and 100,000 EGP, with most at the lower end. In fact interest was so high that the team turned down a Venture Capitalist (VC) offer from Switzerland, where Yusuf did his MSc, because they thought that the VC route might create too many headaches so early on. The Swiss VC didn’t think Egypt would provide enough quality employees, so perhaps some positive nationalism was also involved in the founders’ decision.

The team have two revenue models in mind. One revolves around social personalised e-commerce to create a better online shopping experience. The other is to provide businesses with detailed analytics in the form of dashboards provided along a Freemium model.

After studying various business growth strategies, the team opted to mimic facebook’s early growth by staging competitions at university campuses and their office to build a local community of loyal users.  They’ve also been finding “ninja users” for each category, these are the users that’ll generate the bulk of the content.  The success of the site of course depends on large user numbers, and that relies on large numbers of reviews.

While this strategy of creating hype on the ground seems sound, it’s also resource intensive and not scalable. And the site’s biggest advantage, the fact that it covers everything, is also its biggest disadvantage, as people tend to trust review sites that specialise in a category or two.

I think a better strategy would be to open up the Trustious APIs so that any website can have reviews, making Trustious a global review system; in the same way that Facebook, Twitter and Disqus are now providing global comment systems.  This would get users using Trustious without the users having to leave the websites they already love and frequent.  Perhaps the team is so focused on driving users to the Trustious site that they overlooked the obvious alternate route of merely driving traffic to the functionality.

I was entranced by their science and the meticulous plans at first, but I believe if the team turns their technology into a platform they provide the next level up to Facebook’s limited “like” and Google’s “+1”.  Do that and they’ll scale to levels never before seen in Egypt or the region, and we might just have the first next big thing success story we’ve all been yearning for.