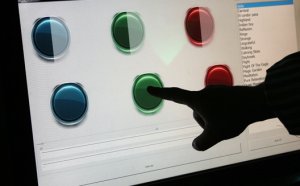 Palestinian startup Iris recently launched their “room of senses,” a new therapy medium for children and the disabled.

The “room” is a space with different interactive technological activities designed to stimulate the senses, as part of a broader treatment for autism, speech difficulties, and mental and motor disabilities, as well as nervousness and tension.

The technology includes an lit, interactive floor system, that encourages users to dance, along with an interactive sound system, a fiber optics light system, bubble pipes, a balloon pool, and an image projector, all of which ask users to trace and move images.

Thus far, it's been a success in medical centers in Jenin and Nablus, in part thanks to support from NGOs and civil society, including MAP (Medical Aid for Palestinians). As they train under the supervision of specialized doctors, patients have shown development. “We've seen improvement in speech ability, motor skills, color identification and concentration," says Iris co-founder Mohammad An-Naneesh. Now, these “rooms” are being set up in rehabilitation centers across Palestine.

The initial idea for the "room of senses" struck engineering students Ayman Al-Arandi and Ahmad El-Rabi when they designed their senior year engineering project at the An-Najah National University. Their initial invention, the Touch Interactive Surface (TouchIS), was the first element of the room. Once they decided to build it, they brought Mohammad An-Naneesh on board as a co-founder.

TouchIS is now the first multi-touch screen made entirely in Palestine. In 2009, the project took second place at both the “Made in Palestine” and “Made in the Arab World” competitions held in Egypt.

Touch Technology on the Rise 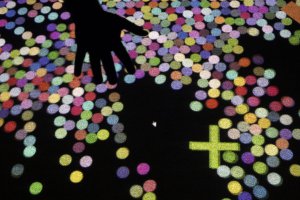 Today, Iris extends far beyond the "touch room"; it now builds customized touch interfaces at competitive rates, starting at US $10,000, depending on the content and specifications.

With an increasing demand for new touch screen solutions, from advertisements and presentations to education and entertainment, it's a sector on the rise; the company is already serving clients in Palestine, Britain and Egypt. (Its irisGlass might remind you of the transparent interfaces in Minority Report).

Over the past three years, Iris has provided this technology for several projects in the region, including outfitting an information center in Bethlehem with state-of-the-art interactive presentation touch screens. Another is on the way in Jenin. The hope is that their screens will help boost tourism by providing visitors with access to the largest audiovisual database in the Jenin area.

Across Palestine, Jordan, Egypt, Turkey and France, Iris has demonstrated its technology at different events and conferences, continuing to boost the profile of technology in Palestine, forging a path as a local pioneer as it keeps up with the latest international techniques, building on a talented team, and adopting a vision based on modern solutions at competitive rates.

Learn more about the censor rooms by watching the video below: