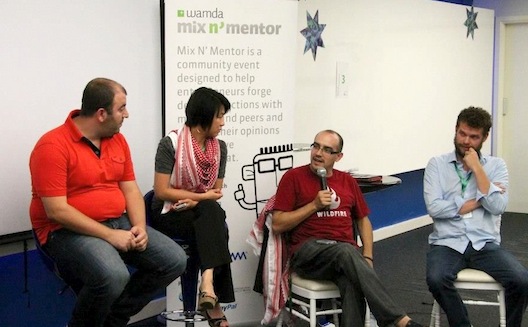 Over a month ago, one of the world’s most influential technology investors and startup accelerators in the world, 500 Startups, visited Dubai’s MAKE Business Hub through their “Geeks on a Plane” (GOAP) initiative.  GOAP is a high-profile, global initiative that “brings entrepreneurs, influencers, and press from around the world to convene in regions with burgeoning, high-growth market potential.”

Dave McClure, the founder of 500 Startups, opened the event with a somewhat fresh perspective on entrepreneurship, one that is more grounded and realistic than the usual hype heard across the region (and maybe the world).  Unexpectedly, McClure started his talk with sincere advice to not become an entrepreneur, explaining that there were “many other ways to be well off and much happier,” and that despite the excitement, starting a company is still gruesome roller-coaster. McClure emphasized that while several costs related to starting a company have gone down in many markets, the rate of startup failure globally is still stubbornly constant.

For those “crazy enough” to still want to be entrepreneurs, Dave had more advice that we can reflect on as we think of more startup ideas for 2013:

Perhaps one of McClure’s most insightful comments came in the form of a question to the parents in the room: “Is there any amount of money you, as a parent, would not spend on your kid, between the ages of 0 and 7, to make sure they are educated, healthy, and safe?” After an “aha” moment that swept the room, McClure ended with: “There is a huge opportunity here that is being missed because most entrepreneurs are single and men.”  Can the women entrepreneurs in the region please stand up!