​Online classified ads is one of Morocco's two biggest digital sectors, along with daily deals, and both have seen spectacular growth in Morocco over the past two years. Since 2011, new actors Soukaffaires.ma and Bikhir.ma have arrived to challenge the hundreds of other general and specialized online and offline classified ads companies in the country. Marocannonces.com remains the historical pioneer, but now even popular U.S. leader Craiglist has launched a Casablanca satellite.

The latest player to enter the market is Avito.ma, which launched just six months ago as the Moroccan arm of Avito.ru, a leading online classified ads portal in Russia that launched in October 2008.

So why are there so many competitors in an emerging market like Morocco, we could ask?

Secondly, Moroccans like to buy online. The country's “e-commerce and distance selling” (internet, phone, mail) market was evaluated at 504.2 million MAD (~US $58 million) in 2011, and it's estimated that there are over 102,000 online shoppers according to FNEM (the National Federation for E -commerce in Morocco). The only cloud on the horizon might be a low literacy rate of 56.1% that could slow internet uptake in the longer term.

For now, however, it's up to the major players to battle it out for the lead. Each has a different background- two are international entrants (Bikhir and Avito), one is a locally funded player (Soukaffaires), and the final one is a completely financially independent Moroccan institution with 12 years of experience (Marocannounces).

Each has a different approach to advertising- Soukaffaires.ma first distinguished itself with billboards ads in various cities, and Bikhir.ma with a massive campaign online on the Google ad network. Avito.ma has now received attention recently for launching an amusing TV campaign, which makes them the first classified site to advertise on TV (also signaling deeper pockets than the average startup). Currently, only three rank above 50 in Morocco according to Alexa (Avito is #16, Bikhir #18, Marocannonces #43, and Soukaffaires #347). 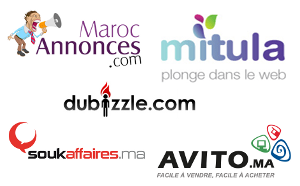 To get a sense of where the market is headed and better understand how a startup can enter a space with several key players already in existence, I interviewed Avito’s MENA Marketing director, Sammy Ben Abla.

Watch the video interview below to see him describe why the company is focusing on Morocco and Egypt (where it also launched two weeks ago), and how the Moroccan market will evolve.

An example of Avito.ma's amusing commercials: