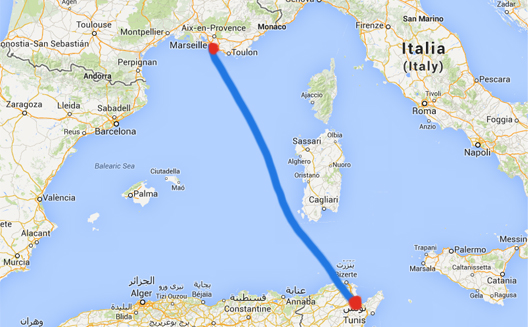 This piece is part of a new series on expat entrepreneurs.e

Almost all entrepreneurs, at least for a time, share the same concern: how to survive as long as possible on a small budget until they hit it big or find investment. But, as we recently discussed, some European entrepreneurs have found another solution: moving to North Africa.

Some come with their entire team, others build their team there, but all share the same motivation to reduce their costs.

Renaud Laurent is one such French serial entrepreneur. In 2009, he decided to start a new venture called mixxIT, which simplifies business telecommunications abroad, using Voice Over IP (VOIP). Its signature service, Smartcall, allows travelers to roam without racking up fees; for instance, if you’re living in Tunisia but are traveling to Dubai, you can call and receive calls from both your Tunisian and Emirati numbers on your smartphone without having to change SIM cards and without roaming, using your existing data plan.

Although Laurent initially received several grants and awards, he couldn’t raise enough funds to sustain his business in France. “I needed twice the amount I raised to get this project to work in France,” he explains; he needed to find a way to cut costs.

His second concern was the lack of workforce flexibility in France. “When you’re doing a startup, you need flexibility. If there’s a problem, and you need to switch up your team quickly, you can’t do this in France because the legislation is too constraining,” he says.

Since his product could be developed and sold anywhere in the world, Laurent quickly made up his mind to move to another country. “Tunisia is known for its engineers, it's really close to Marseille [the second biggest city in France, located on the Mediterranean Sea] and the salaries are much lower than in France,” he says. On top of these benefits,  Tunisia has more flexible work requirements and is increasingly attractive to foreign investors; exporting companies and foreign investors are exempted from taxes there for 10 years.

Challenging, but worth  it

Despite these advantages, getting set up takes work. When Laurent arrived in Tunis, all he had was his idea, a little money and a couple of contacts, but no knowledge of the market or the local culture.

His first move was to get in touch with a local Tunisian, which helped him with his first challenge of finding capable engineers. Yet recruiting a few engineers turned out to be the easy part. “In the beginning, there was some turnover,” he confesses; he had to adjust to a new way of managing his team. “Many employees here don’t really have a startup mindset,” he says, “so I had to recruit them when they graduated before they got used to working in big companies.”

Language was another hurdle; Laurent can easily work in French with his team, but he admits that many graduates just don’t have a strong enough mastery of French to work as salesmen, so he’ll have to either train them or build a sales team elsewhere when the time comes.

Red tape is also an issue; three years on, Laurent is still surprised by how much time administrative bureaucracy and customs take. But, “on the bright side, you can always find a way around,” he adds.

Combining the advantages of France and Tunisia

With mixxIT, Laurent has created an entity in France to maintain the legal protection, political stability and various government benefits he receives there. Likewise, he files all of his patents in France, and benefits from young innovating company fiscal status as well as research tax credits and the Faro Fund, which supports innovative partnerships in the Mediterranean.

Laurent has also created a second structure in Tunisia that works as a sub-contracting company, so that if the political situation gets tricky, he can hop back over to France and create a new team, he says.

In spite of some of these challenges and legal hurdles, he has no regrets; if he hadn’t moved to Tunisia, his startup wouldn’t have survived and grown to where it is now. His one tip for entrepreneurs who are considering a move to Tunisia is simple: “Keep an eye on political instability, and always have a drawdown plan.”