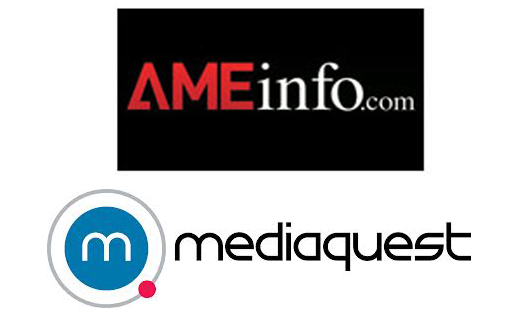 While the terms of the deal are undisclosed, sources are saying that the amount was close to US $1 million, a mere fraction of the $29 million that Emap, now named Top Right Group, paid for the site in 2006.

Since its launch in 1993, AME Info has built an audience of over 2.4 million unique visitors monthly and over 300,000 unique registered users, and has retained a reputation as a go-to source on the web for business announcements.

As one of the oldest news sites on the Middle East web, it's still ranked first for business news sites in the Gulf region on Effective Measure, an online audience measurement tool, says Mediaquest Co-CEO Alexandre Hawari; sources say it may be the most-read English news site in the region aside from Gulf Business and Al Jazeera. “Despite the various changes in leadership over the years, AME Info has shown resilience in brand value; it’s one of the most valuable brands in the region,” says Hawari.

SME Info, which launched a year ago to offer startups advice, access to mentors, video interviews, and an awards series that brought over 500 attendees together last year, also demonstrates “huge potential,” says Hawari. “The numbers are very promising.”

So why the bargain basement price?

It’s not the first deal in the sector to underwhelm; when Zawya sold to Reuters in a deal rumored to be around $40 million, the price seemed a touch low to some, given that the site was almost sold for around $80 million in 2008, and Saffar Capital had already invested what some sources say is around $10 million over the years.

Yet an amount closer to $1 million points to a heavy desire to sell; while AME Info's traffic exceeds Zawya's, its current valuation does not.

Arabian Money suggests that the problem is sector-wide; that it’s simply impossible to make revenue in digital advertising. Hawari rebuffs this claim, saying, “AME Info is monetizing very well relative to its traffic.”

It might be a question of priorities. In 2010, Emap had pointed to the fact that an advertising model simply did not suit its overall focus on subscription models, which it leveraged for business intelligence magazine MEED, Al Arabiya reports.

“Unlike MEED, the AME and SME websites operate to an advertising-led model,” Al Arabiya quotes Matthew Wright, finance and operations director for Top Right Group in the Middle East and Africa, as saying during this sale. “[W]e believe that Mediaquest, a leading media group which has an existing portfolio of advertising led portals, will be a better long term partner for the websites than we can be.”

Other sources say that the desire to sell was driven less by difficulties with digital advertising and more by a push by Top Right Group owners Apax and Guardian Media Group to focus beyond the Middle East and divest from non-strategic assets.

Either way, global trends point to subscription models as potentially more reliable longterm sources of income; both the New York Times and the Financial Times have noted recent growth in subscription revenues as ad revenues fall; the FT is set to see subscription income surpass ad revenue this year.

Zawya, for one, focused on a subscription model early on. While daily news was initially free, readers would pay for sector analyses and intelligence reports. Around two years ago, the site boosted revenue by putting up a pay wall for daily content and increasing subscription fees.

Under Reuters, sources say, Zawya may be beefing up its focus on advertising revenues, however, while also increasing subscription fees.

Mediaquest, meanwhile, wants to move AME Info towards a hybrid model, adding subscription services once the AME Info and SME Info sites are re-launched in September.  “If you want deeper data on a company, you will have to pay for it. But advertising will still be the main source of revenue,” says Hawari.

A focus on more in-depth content might help the site cultivate a more targeted audience as well.

The media publisher, which was founded in Paris and primarily serves the Middle East and North Africa, also owns online ad network Dotmena, which runs ads on over 2,000 websites.  Mediaquest also publishes a total of 17 titles, including The Kippreport online and print magazines Gulf Marketing Review, Communicate, TRENDS, and Marie Claire Arabia. In 2009, Abraaj Capital acquired a minority stake in Mediaquest.