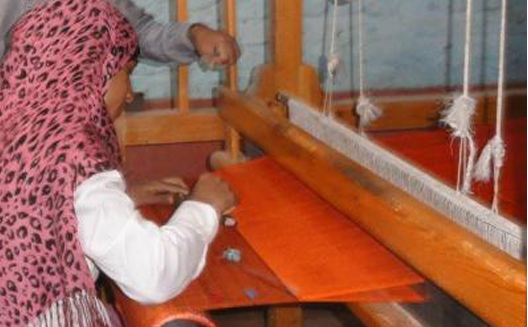 To support young women social entrepreneurs in Egypt who are promoting job creation, encouraging rural development, and alleviating poverty, the World Bank recently announced the names of the 34 winning projects from their Development Marketplace competition in mid-June. The competition aims to support agribusiness and handicrafts projects across Egypt, with a special focus on Upper Egypt.

Upper (southern) Egypt, is predominantly comprised of agricultural jobs with traditionally limited opportunities for women to work. So many women have turned to producing handicrafts as a primary source of income.

The World Bank’s program helps these entrepreneurs, who usually don’t have the same opportunities as their counterparts in Cairo or Alexandria, by technical training and know-how to help them in writing a business plan and implementing their projects. Development experts are also assigned to each entrepreneur to continually follow-up on their progress as the grow. The program also offers these women the opportunity to network with others in the field as well as with local and international development organizations to open up more opportunities for them during and after the one-year grant period.

The Development Marketplace (DM), founded in 1998 has awarded over US $60 million to more than 1,200 innovative projects in local, regional, and international contests. Egypt is the first country to host the competition in the Middle East and North Africa, which is now becoming the program’s new focus.

Contestants submitted their project proposals from November 2012 to January 2013 during which time they attended networking events in several Upper Egyptian provinces to educate them about the competition criteria and help them craft their proposal. During this time, the competition saw 180 proposals from 170 entrepreneurs across Egypt.

The program is being implemented alongside several public and private partners, including the Sawiris Foundation for Social Development, the International Labor Organization (ILO), the governments of Finland, Denmark, Switzerland, Britain, Australia, and Canada, as well as the Food and Agriculture Organization (FAO), the African Development Bank Group (AFDB), the International Fund for Agricultural Development (IFAD), Innoventures, and development organizations such as Misr El Kheir Foundation, Ashoka, Nahdet El Mahrousa, Etijah, and Mercy Corps.

Winning projects, each awarded a $25,000 grant, in addition to technical support throughout 2014 were characterized by their geographical diversity: the Aswan province saw 6 projects chosen, Minya and Qena each saw 5, Asyut and Al Aqsar had 4 each, Beni Suef, 3, Al Fayyuum and Cairo, 2 each, and Sohag, Al Sharqiya, and Giza, one project each for a total of 34.

The majority of projects focused on creating new job opportunities for Egypt’s youth and female workers, by establishing traditional craft workshops and centers that focus on shell crafts, patchwork, embroidery, and silk-making, developing the products in collaboration with local designers. The projects hope to promote their products online and build new generations of craftsmen, as well as support and establish bee yards for honey production and packaging.

In Aswan specifically, projects focus on furniture created from palm branches, so support local workers and families. Other projects also seek to establish a center for the maintenance and repair of irrigation pipes to increase agricultural production, especially during summer when water shortages can destroy crops, and creating a clothing production factory using local materials.

Minya’s winners are focusing on providing youth with the necessary skills to produce high-quality food products and teaching rural women how to cook and serve food as employees. In Assyut, the proposals revolve around recycling agricultural waste, while the Al Aqsar winner hopes to build tomato-drying racks.

In Beni Suef, a dairy products collection center will be built with the capacity to produce four tons of milk per day, while the winning projects in Al Fayyum focus on the improving the post-harvest process (cleaning and drying) through a solar-powered drying system. Cairo’s winners focused on the providing logistics and technical support for fig and olive outlets for the distribution of Egyptian dessert products.

Nehal El Kouesny, Media and Information Department Manager at the World Bank in Egypt, explained that the fund actually had more money allocated for the program, but not enough projects met their criteria due to strict guidelines. The jury looked at several criteria: the quality and feasibility of a project, the number of jobs it would create, its social impact, its potential to scale, cost-effectiveness, the proven demand for the product in the market, and the project’s viability for investment. Priority was given to projects led by women.

El Kouesny added that the winning organizations, chosen from the 59 finalists, showed a huge improvement from their first training by the World Bank and took to heart the suggestions by the program mentors.