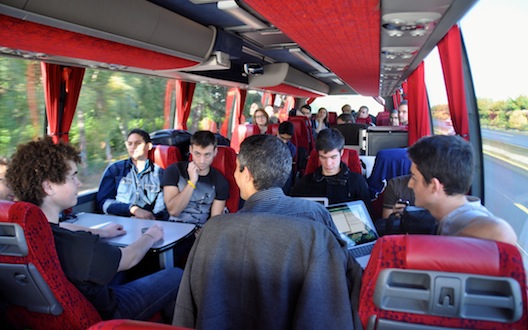 They say travel makes you wiser, meeting people opens your mind, and succeding involve trying - and even failing. What happens when the three are mixed? If a hackathon is combined with an international road trip?

That is what I have ventured off to discover by joining StartupBus Europe. An annual program launched in 2010 in the U.S., designed to support entrepreneurship and regional cooperation. StartupBus unites business people, designers and developers in buses to get to a major international tech event. Each bus leaves from a different city and goes between various cities (and now countries). As they travel around 1500 km over three days, participants form teams, and build a project that they will pitch and defend on the stage of the major partner tech event at the end of the trip. They receive support and coaching from well-known experts as they visit some of the most prestigious local incubators, offices, and hubs. But, perhaps most importantly, they live through a unique human experience.

In a couple of weeks, StartupBus will travel through Africa, the first event of its kind. Meanwhile, two days ago, StartupBus Europe launched to travel to the Pioneers Festival in Vienna, a major tech festival in Europe. I joined the French bus to see firsthand what makes this event unique for participants, how Europeans build various projects from the ground up, and which theoretical and practical approaches those European entrepreneurs use. During five days (three on the road, two at Pioneers Festival), I will be mingling with the 19 participants of the French bus - French and Belgians, with one Mauritanian - and meeting up with entrepreneurs from all over Europe.

This past Sunday, after having breakfast at Startup42, a Parisian accelerator in Epitech/Epita, a well-known coding school, the bus headed to Fribourg, a small Swiss city eight hours from Paris. An hour later, four teams each of four - six members came together and started developing their products.

After a few hours, the teams were invited to give a “one sentence pitch”: "Our company [name of the company] is developing [a defined offering] for [targeted audience] to [solve problem] with [secret sauce]." Even if you're not on StartupBus, it's good practice to repeat this over and over again while developing your project. According to Rose Jeanet, the StartupBus 'conductor', it allows groups “to keep in mind the problem you're trying to solve and to ensure the team knows where they're going.” All entrepreneurs should develop this good habit.

For the majority of the so-called "buspreneurs," the first major challenge was choosing a business model. One team summarized the process: “We realized very quickly that we were going straight to the wall. At 4:30 AM, we stopped everything. We knew that it was better to stop fast and find a new idea.” Luckily for this team, they got back on track quickly thanks to a "stay positive, be dynamic, and keep smiling" strategy. 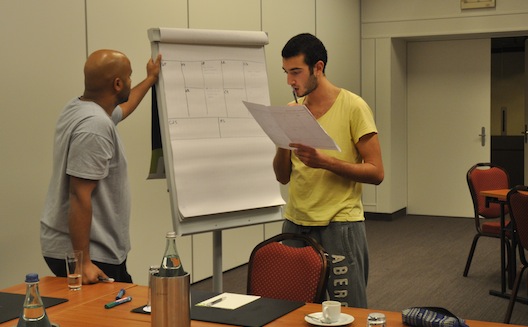 Most of the time, pivoting is not that easy. Another team tested different projects all day long before finding an idea that they would all agree on, and feel motivated about, at 10 PM. Their major challenge: finding feasible projects with a viable revenue model. To do so, they used the business model canvas: they tested each project following this canvas and carry on to the next one quickly if it failed. Once again, the “fail fast” idea imposed itself.

To confirm their model, teams took advantage of their stop in Fribourg to do some customer development, by talking to random pedestrians and storekeepers to verify if the product was interesting for them. Entrepreneurs should never ignore this step; that’s how one team realized that their targeted clients didn’t need their service, which lead them to rethink their revenue model.

For others, the difficulty simply consisted of staying in good shape despite the lack of sleep - count a couple of hours of sleep at best!

On Monday at 5:30 AM, all the buspreneurs were back on the bus. Each team had finished its famous morning “one sentence pitch” and was back to work. In two hours, we would arrive to Zurich, the biggest city in Switzerland, and head straight to the Google offices.