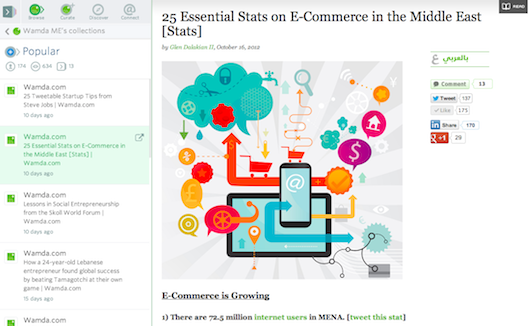 There are several ways to curate content on the web these days, but it’s often a fragmented experience.

Now that Google Reader is dead, sharing content often involves one of three methods:
1) consuming curated media and sharing individual pieces (on platforms like Feedly, Zite, or Flipboard),
2) posting content on social networks where it gets lost in the noise of other status updates and comments (on Facebook, Twitter, Google+), or
3) aggregating items at a single destination (like a Storify narrative, a Pinterest board, or a Scoop.it, Paper.li, or Flipboard magazine).

Yet sometimes none of those solutions solve the problem of wanting to deliver an entire set of content easily; perhaps it’s why some great content curators have gone back to newsletters.

Nextly, which launched today, solves this problem by redefining web content curation. Based in Boston and founded by Lebanese entrepreneur Ziad Sultan, the platform allows curators to share an entire stream of content with a single URL.

Previously known as Marginize, it still lives on the margins of the web- literally. When a user clicks on a Nextly link that you’ve shared, the website opens, along with a sidebar that reveals a stream of your curated links. Readers can click ‘Next’ to immediately jump to the next piece in your stream; using the platform is like zipping through your personal newsletter without having to click individual links.

Yet the best part is that it doesn’t feel like you’re ‘on’ Nextly; you’re on the web. It feels like a tool rather than a platform, and doesn’t require publishers or readers to use a social network, plugin, browser extension, mobile app, or even a login.

The curation itself is similarly lightweight; users can add articles to their streams or create new streams by using a little bookmarklet; there’s no posting or redirection. It’s a fully embedded experience on the fringe of your browser page.

For a concrete example of what that feels like, you can see our page on Wamda. Users can click on an article, click through to our 'most popular' content stream, using the keyboard's right arrow to click through pieces. You can also click “Wamda ME’s collections” and view our other streams, like one on E-commerce. (Note: our streams are also in beta).

Unlike other curation platforms, Nextly offers analytics on the number of visitors and pageviews each stream has, so publishers can assess their most popular topics. For serious curators and publications, this adds a layer of data that many social media sites have yet to supply.

Curated browsing is very different from ‘sharing,’ says Sultan. “Sharing is the equivalent of using a megaphone and telling everyone about a specific piece of content. It’s very temporary, whereas curating is a more thoughtful process, where you can create cumulative value over time.”

The platform’s minimalist design was created from knowing as much what to add as what to leave out, he says. “When we started doing this, you can imagine how many things we may have wanted to include. Then we boiled it down to just hitting the ‘Next’ button. We tried to make it as simple as possible, although it’s a powerful concept.”

“‘Hit next’ encapsulates everything,” he explains. “It describes the format as well as the speed.”

Over the past year, the Nextly team- a group of eight, distributed across Boston, New York, Montreal, France, and Egypt- have honed its design by testing with (lesser-known) publications like the Wall Street Journal, the BBC, Forbes, Slate, the Washington Post, as well as (global juggernaut) Wamda, watching as users clicked the ‘Next’ button 100 million times.

To date, Nextly has raised $1.5 million from $1.5 million from SOS Ventures, Atlas Venture, and other angels, including, David Cohen and Dharmesh Shah, after securing a total of $700,000 as Marginize, including $250,000 from TechStars at a Demo Day in 2010.

Now it stands ready to put the power back in the hands of both publishers and individuals. “If I read your content on Google Reader or Flipboard, or any of the newsreaders, you don’t get analytics on pageviews, and you don’t get the revenue, so it kind of messes with the web,” Sultan points out. “We are the web. We’re not trying to create an app that’s going to mess with the content; we’re letting people guide each other to the actual pages. In the long run, it’s a better solution for the web.”