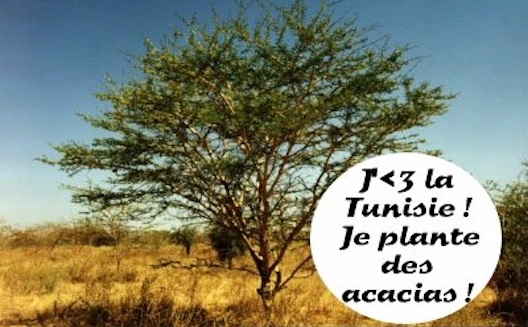 “When I was young I was fascinated by superheroes. They not only have extraordinary powers but there is always a strong morale… a sense of responsibility and motivation,” claims Sara Toumi, a 25 year-old Tunisian social entrepreneur.

At age 9, Toumi, paid a first visit to her family's hometown of Bir Salah, a small Tunisian village in the Sfax province, during her summer break. There, she discovered a different reality where rural women are marginalized, and her female cousins and friends had limited access to education and limited roles outside the home.

At a young age, she joined her father in numerous charitable activities, bringing more than 35,000 books and 300 computers to different rural regions. So it seemed natural that she would create the Ajmi Organization, a charity named after her father, with her father in 2004.

She then joined the international social entrepreneurship program Ashoka Youth Venture program to develop a new project called Acacias for All. The project works to fight against desertification, which affects 80% of Tunisian land, and at the same time to empower Tunisian women. The Acacias project creates acacia tree incubators in Tunisia and offering them to rural women, to create a green belt that will prevent desert encroachment, help fertilize arid soils, and enable women to sell the Arabic gum and other products that the trees will bear.

With the mentoring of Ashoka experts, she finalized her business plan and presented it to representatives from the World Bank and the United Nations Environment Program (UNEP), going on to win the Ashoka Youth – Changemakers prize in 2009.

The Acacia team will kick off the program by planting seeds in their nurseries, with the sponsorship of environmentally conscious businesses that sponsor trees to offset their carbon emissions.

A year later, they will plant the seedlings in several Tunisian villages, and train women from those villages to take care of them.

After three years, the newly trained women, with help from other women from their village, can begin harvesting the produce the trees start producing, like Arabic gum, aloe vera, leaves from Moringa trees, and pomegranates, depending on the variety of acacias planted. The women will join a cooperative to sell their produce, following a fair trade model to improve their financial conditions. “We do not seek to make financial profit but we need to ensure the sustainability of the project and jobs,” Toumi explains.

At the moment, six people are working on the logistics, the coordination, and the funding of the program. So far, the project has only focused on the village of Bir Salah: 1,000 trees have been planted there, 20 women have been trained, and 80 more are working with them. In 2015, they’ll be able to start selling the produce.

In November 2013, the project will expand to new villages: 5,000 trees will be planted and 80 more women will receive training.

Creating spaces for women to succeed

The Ajmi Organization also works “to promote educational or entrepreneurial programs for women and youth,” says Toumi. In 2009, the association launched the Women's Club, a space where women can meet and learn. It has a computer lab and hosted different handicraft lessons, health workshops, and medical consultations.

“Usually, the public space in rural areas is dominated by men. Women have limited space where they can thrive. We offer them a space of freedom,” Toumi emphasizes.

There is also a club for emerging entrepreneurs, providing professional training for unemployed youth as well as the region’s physically handicapped. Funding for this project came mainly from international grants such as a €5,000 grant from Orange Foundation and other international NGOs, as well as from a crowdfunding campaign.