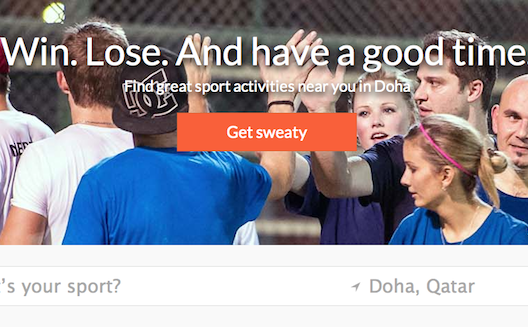 If there's one thing Brian Sigafoos loves as much as sports, it's software. A 6'10" former professional basketball player, he's managed to combine his two favorite pasttimes by moving to Dubai in 2008 to join Duplays, the online platform that connects with organized sports events.

In an effort to reach new markets, Duplays is now packaging its software under the name Playpass, and marketing the platform to all sport organizers big and small. While Duplays is now pursuing a franchise model with 5 locations so far (Dubai, Abu Dhabi, Doha, Amman, and Gurgaon, India),  Playpass is aiming to sign up thousands of sport organizers and so far has fourteen. Sigafoos will serve as its CEO.

Founded in 2007 by Ravi Bhusari and Derv Rao, two friends who rejected the ideas that making friends in Dubai required an unhealthy, party-heavy lifestyle, Duplays has grown exponentially since then, from 20 Ultimate Frisbee players in Dubai to over 50,000 members playing over 20 sports in its five cities.

As the company has grown, it has evolved from online portal to software platform. “We kept building tools for us to organize sports as efficiently as possible – online payments, managing rosters, financial reporting, communicating with members on a platform we built from scratch internally,” Sigafoos explains. Now, the team is releasing Playpass software in response to popular demand: “Groups kept coming to ask how to use our platform; instead of advertising, we wanted to give our platform to others to use,” he says.

Its success will depend upon the popularity of sports worldwide. According to Sigafoos, the fact that Duplays survived Dubai’s 2008 economic crash speaks to the fact that sports and fitness are “not a fad,” and that people will want to work out no matter what the state of the economy or their finances.

He also expects a global love of sports to overcome the hurdles that franchisees could face when trying to popularize sports communities in regional markets that aren’t as heavily populated by expats. Duplays, thus far, has been something of an expatriate-friendly brand: expats founded it in Dubai, and its success has largely been driven by the healthy habits of young, active people living away from home in the UAE.

Duplays Amman, which launched a few weeks ago, will be a good testing ground for its expansion beyond an expatriate market. While it’s too early to measure its success, Sigafoos says, he’s confident that, with the right marketing, the model will thrive in the right cities – those with more than one million people, high purchasing power, and a population interested in playing sports.

Thus far, Playpass has 14 sport organizers on board, including 5 Duplays franchises, which it's supporting with continuous improvements. Duplays will “aggressively add new features [to Playpass] to help them run their businesses better," says Sigafoos. “We recently overhauled the way each organizer’s homepage looks based on their feedback. We included more text description, maps, contact information, and a fresher design," and more is on the way, he adds.

Another key element for scaling the business is ensuring that new users can easily join and start playing. “Everyone will be able to post one event online for free,” says Sigafoos, in hopes that they’ll like the experience so much that they’ll come back for more. “We want to be as inclusive as possible,” he adds.

Whether Duplays’ success can be replicated in cities without large expat markets is yet to be seen – but exercise is more popular than ever, as are online forums for finding and organizing local events. Playpass, and its towering CEO, are betting that the combination of the two will be a slam dunk.