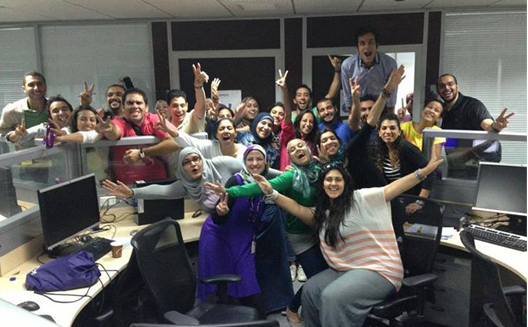 In the aftermath of Yahoo's closure of its Cairo office two weeks ago, many have noted that it wasn't an isolated incident, since many large companies have fled Egypt following the prolonged political instability.

Although tension has been brewing since last December, recently, departures have accelerated; as reported by Al Ahram, 7000 were laid off from the Swedish company Electrolux, followed by General Motors and Toyota.

Royal Dutch Shell also closed for the safety of its employees, according to Al Ahram, and the German chemical company BASF closed due to the “violence in the country.” Finally, the Turkish food company Yildiz put an end to its large deals in Egypt due to “lower sales."

At Yahoo, the decision to close down in Egypt wasn’t a surprise for the employees who followed CEO Marissa Mayer's speech last March and noted her mention that there weren’t any new appointments in Cairo.

One anonymous Yahoo employee told Wamda that the company didn’t inform its employees of the decision, but gave them excellent financial compensation, offering two months' salary for each working year as severance pay. This amount complies with Egyptian law, and satisfied most, the employee said. Of those who were laid off, most seemed optimistic about finding another job thanks to their experience.

As reported, less than a quarter of the employees will be relocated to Amman or Dubai as soon as possible.

Although Yahoo's internal memo said that the move was part of "Yahoo’s global efforts to streamline operations," the former employee said that in Cairo, at least, it was certainly thanks in part to deteriorating conditions in the city. As clashes escalated last December and early this year, the typical one-hour trip to Yahoo's office in 6th of October City turned into a three to four hour ordeal that employees began describing as the “torture trip.” With theives on the streets, the trip even became dangerous. Therefore, the company allowed the employees to work from home (a privilege that Mayer banned for all other Yahoo offices earlier this year).

General consensus is that, with the wave of confrontations sweeping the city following June 30th, Yahoo didn't have a choice but to close. This former employee thinks that Yahoo’s decision is the “natural result of instability."

Although not all share his opinion, it's still not an easy pill to swallow. “After the January revolution, everybody in Egypt and the world thought that Egypt will rise and be a major economic power. Everybody believed in success. But, after two and a half years, Egypt became repellent to investment, tourism and any growth activity. While, we, the youth, are depressed and looking for a way out of the country,” the employee says.

While the startup scene continues to grow, with Google's DevFest Alexandria last week and upcoming festival RiseUp Egypt, the media has not reported heavily on these large closures to date.