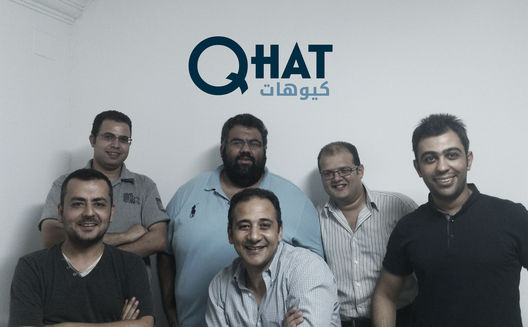 A new loyalty scheme went live in Egypt that could disrupt the typical model deployed by market leaders like Zoboon locally or Nectar in the UK.

What makes QHat (pronounced Queue-Haat) different is that it's merchant-driven, as opposed to offering a coalition scheme, where points earned at one merchant can be redeemed at a variety of other merchants.

Merchant-driven schemes are, as the name suggests, merchant specific.  The simplest example is the coffee-shop loyalty card: the card is stamped every time a customer buys a coffee, and once a certain number of stamps are collected, the customer earns a free drink. That's how QHat works, while offering merchants the chance to customize their own loyalty scheme.

Technology for a developing market

Rather than rely on hardware, smart cards, or mobile equipment, QHat works with the alphanumeric QHat Smart Code (QSC) or QR codes, and the good old fashioned printer.

When a customer makes a purchase, the printed receipt contains the QSC separately and embedded in a QR code. If the customer has a smartphone, scanning the QR Code will take them to QHat's website, where they can log in and their points are added automatically. If the customer doesn't have a smartphone with internet access, they can login and add the QSC manually once they connect to a computer. While logically it makes more sense for the merchant to enter this information on the spot, the culture of serving the customer is weak. Relying on the checkout person to take the money and to perform another action means many points would get lost, especially at a busy store.

Each merchant can customize the platform to decide what type of rewards to offer; once a customer has amassed enough points, they are notified on the website with a redemption code, which they can then give to the merchant to redeem their reward.

The platform also offers analytics, a communication system for directly messaging customers, and a "Shopping Community" that allows for the ad-hoc creation of coalitions between merchants, and the ability to cross-sell and cross-promote.  All of these defensive marketing strategies should maximize the customers' life time value for local merchants.

The Offline Side of E-Commerce

Although it depends upon codes, which offer their own barrier to use, QHat's decidedly old-school approach is cleverly suited to the reality of the consumer and merchant mindsets in Egypt. With over 35 million online users, Egypt has a lot of potential when it comes to internet-based business models, but the majority of purchasing still takes place offline. QHat's model is a great example of blending an offline and online approach that caters to local cultural purchasing habits.

In fact this is what enticed current CEO Sherif Korashy to invest in the company as an angel. He explained, "I launched GoNabit in the Egyptian market and worked closely with merchants of all sizes, across different verticals, who were all striving to acquire new customers as their only way to increase sales."

Customer retention is critical, he points out. "Focusing on customer acquisition tactics in the absence of a comprehensive customer retention strategy always results in unsustainable profitability." He previously held executive positions at eBay, PayPal and Oracle, and also served as the LivingSocial Country Manager for Egypt.

Korashy has helped shape the company's model, says co-founder and CPO Ahmed Elasra. "We had some clever technology but no clear business vision.  When Sherif invested and joined, it was logical that he became CEO.  This allowed him to use his vast experience in a hands-on way. QHat has now evolved into a complete Relationship Marketing (RM) platform, and our business model is now highly adaptable," he says.

QHat soft-launched in March this year with the ECCO chain as their pilot merchant. Since going fully live in September, they've been steadily signing merchants in phases, to test uptake and traction. The team hasn't released a mobile app yet, because that could constitute a bigger barrier to entry for current consumers.

Only time will time, but by serving bricks-and-mortar businesses with relationship marketing tools, QHat may disrupt the local marketing and loyalty space.