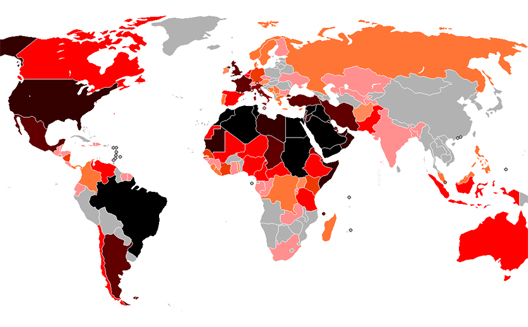 From the Rise Up Summit (a conference dedicated to innovation and Egyptian startups), to the MENA Innovation DemoDay (a series of pitches organized by the Arab Tech diaspora in California for key Silicon Valley actors), the Arab tech diaspora has been constantly proving its global relevance in the wake of the 2011’s Arab Spring uprisings.

Diaspora Entrepreneurship was born in 1990s Silicon Valley, mainly due the desire of talented Indian technological diaspora based in California to build technology bridges with their home country. Established in the early 90s by Indian entrepreneurs, managers, and internet specialists, Indus Entrepreneurs set a goal to mobilize the highly qualified Indian diaspora in the US. The objective was to contribute to economic development, especially technological, of the subcontinent.

Since then, Indus Entrepreneurs has played a key role in the technological development of India. It has served as a corridor between the Silicon Valley metropole, and the future Bangalore Valley (by launching awareness campaigns to encourage US firms to settle there, among other strategies). It has also helped accelerate the digital positioning of India on the international level.

How can members of the Arab tech diaspora, located in North American and European tech centers, emulate the Indian successful story?

A 2010 study on Diaspora Entrepreneurship in Arab countries has offered real tools to reinforce the startup ecosystem in North Africa, Jordan, Algeria, Lebanon, Egypt, and even Syria).

Arab tech diasporas can help startups in their country of origin plug into different innovation ecosystems via three approaches: mentorship, funding, and by playing the role of ecosystem connectors between the Arab world and the West.

Nine startups projects out of ten fail, often due to a lack of mentorship. Before attempting to get funding, entrepreneurs need guidance, coaching, and advice from experienced professionals, in order to correctly analyze the opportunities in the targeted markets, to be forced to answer tough questions about their business model, to think internationally, and to learn how to pitch and communicate their projects.

The Arab tech diaspora is full of experts able to provide mentorship and advice to young people of the web. It could be directly structured on the internet via Skype or other interactive tools, or in the field via incubation programs like PALinnO in Palestine, Oasis500 in Jordan, Berytech in Lebanon, GrEEK Campus in Egypt, and more.

Another way for members of the tech diaspora to create added value in their country of origin: becoming business angel. Diaspora talent can be also used in concert with various business networks abroad to accelerate the internationalization of young Arab startups through contacts and potential new clients.

A concrete example: the proliferation of business tours in Silicon Valley for young entrepreneurs from the Global South. These are possible thanks to the logistic and financial support of diaspora talents living there, and structured around efficient networks like TechWadi. Most often, these tours involve entrepreneurs in innovation conferences such as TechCrunch or Demo Days, putting them in contact with accelerators and VCs.

The very active non-profit TechWadi has recently partnered with MIT to launch a business plan competition for the Arab region. It has also helped organize the Middle East Demo Day in Silicon Valley, hackathons, and Startup Weekends in the MENA countries. Thanks to their familiarity with both cultures, diaspora talents can be facilitators, helping investments funds in the West find startups with potential in the MENA region.

The multiplication of tech diaspora initiatives points out that the region’s general interest in entrepreneurship and technologies is only set to continue. Despite the socio-political-economic issues, the rise of the tech Arab diaspora is continuing at pace.

To keep the debate going, Wamda partnered with StartupBRICS, the first French blog on startup news from emerging markets, and Simplon.co, a web school for combined encoders-entrepreneurs, to host an event on December 2, 2013 focused on the digital scene and startups in Arab countries.