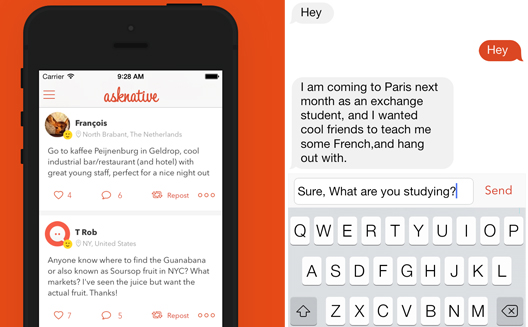 AskNative, a tourism service that works like a social network, is up against serious odds in Egypt, where both tourism and e-commerce are struggling industries. Since the revolution in early 2011 and the resulting political upheavals, tourism has been in a free fall; the nascent e-commerce has been similarly affected by worsening economic conditions and general instability of the past few years.

But Egyptians are nothing if not resilient. Amid the chaos, AskNative, helmed by Abdel Moneim Ragab, has launched a new version of its app on iTunes, and has other, bigger plans for the future.

The app aims to provide destination information to expats and tourists alike, in Egypt and eventually worldwide, Ragab hopes. Users are able to ask questions about restaurants, nightclubs, educational institutions, hotels or tourist sites, getting answers from native local residents.

The new 2.0.0 version of AskNative – featuring an entirely new design – has several useful new features that add an element of social network to the travel planning experience, including chat, hashtags, the option of tagging a specific user in a comment, sharing posts, and the ability to add personal information like a picture, recent activities, statuses, etc.

But AskNative designers didn’t stop there in the Twitter-fication of their site. They added a Discover button to allow users to explore recommendations by place and by user. Users can also enable a Feed. directly related to the people and countries they follow on the app. A Drawer of information is also available, changing automatically when a user travels to a different country.

The most important feature of the new app is that it allows users to communicate with people who don’t speak their language, through the translation section. You can ask a question in Arabic and it automatically gets translated into the language of the person you are talking to. This feature has a one-time cost of around $2 USD, according to Ragab, the founder of the company.

Ragab and his team of four have ideas as to how AskNative can monetize – too many, in fact. “In addition to translation, we suffer from a surfeit of profit plans,” he says. “We intend to open the door to advertisements for companies working in tourism in Egypt, in an attempt to stimulate the tourism sector, almost completely inactive in the wake of the revolution.” The new version of the app also features a new application programming interface (API) that can be shared, allowing advertisers to share specific information about their company with other employees like accountants and developers.

Other services that will be available to users for a fee include the ability to “hide one’s identity, as well as to send messages to users not among one’s followers,” Ragab says. “This is possible only if the other person accepts to receive those messages. The price of all these services varies from $1 to $2 USD at most.” More services are on the way as well, but Ragab is keeping them under wraps as of now.

Over a year since graduating from Flat6Labs, Ragab is still seeking to attract investment. He aspires to make partnerships with people who have both technological savvy and tourism experience, to communicate best with potential investors. He doesn’t want to just raise money as a result of these partnerships; he recognizes the opportunity to benefit from others’ experience and ideas.

Regional and international expansion is a top priority. “If we find the right investor, I hope that we will be able to open offices in the Gulf and the USA to attract tourism companies and their clients to the app,” he explains.

Ragab and his team are not yet satisfied with their client base; they attribute lackluster user numbers to their failure to allocate a sufficient budget for marketing campaigns on social media. “We were busy working, developing, and improving the main product,” he added by way of explanation. “But we won’t lose sight of the necessity for marketing in the next stage. Then, we will also launch a special version for Android. We preferred to start with the current version based on studies revealing that nearly 70% of the mobile traffic related to tourism comes from iOS devices.”

The absence of AskNative competitors on the local or international scene opens up prospects for Ragab’s app. “We are the only one offering this service in the world,” he says, “therefore, I expect small or large companies working in the tourism sector, like TripAdvisor, to use this application as a specialized ad channel targeting clients interested in the tourism sector. [This kind of exposure] is not available on the usual social media websites or even on TV ads.”

Having managed to overcome a lack of financial resources and the continuous change of team members, Ragab still faces a big obstacle in the Egyptian tourism market due to political turmoil following the revolution. He hopes to overcome it in the next stage with planned reforms in the country.

Fifty-eight percent of people making touristic reservations now do so via their smartphones. Ragab hopes that this new culture will nourish in Arab societies to keep pace with the fast development of the digital technology world.