"Dad, the president retweeted my database!"

"Well, it’s great that your boss appreciates your work."

"No Dad, I’m talking about the President of the United States!"

Enigma, in New York City, is one of the only places you might hear a conversation like this.

Clearly, the startup created two years ago by Hicham Oudghiri, a NYC-based Moroccan, has picked up some steam; this tweet from President Obama about a page dedicated to the American government’s shutdown confirmed Enigma as one of the world leaders in the big data field. On this page you could visualize the real time evolution of the many side effects of that shutdown, among which were the many departments of furloughed employees.

That kind of analysis is what Enigma is about: turning big data into a practical tools to understand the world we live in and help journalists, consultants, banks, activists, and scientists make inform decisions. It’s about feeding big data back into the economy. 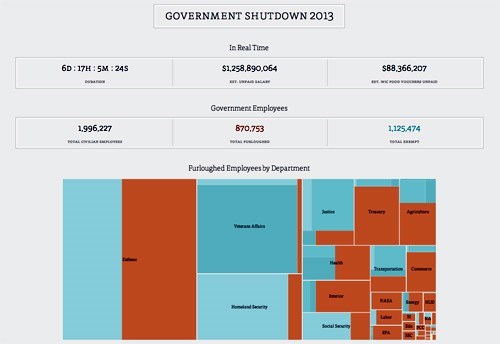 What is big data and how is it useful?

Behind this complex buzzword is one simple idea: there is more and more data all the time, but because it's not accessible, it remains unused. “It’s incredible what data is out there and what people don’t know is available in terms of data,” emphasizes Oudghiri.

At the same time, “data can make extremely informed storytelling and decision-making,” he adds. When you compile and cross-reference open data from government’s various department (for instance the borders, the stock market, or  the public companies) you get pretty interesting results.

In a few seconds, and even fewer clicks, Oudghiri pulled up a list of Boeing’s biggest clients and compared them with Airbus’s, the number of apartments the Kingdom of Morocco owns in NYC and their values, the number of employee Spotify hired from outside the US, and the list of people who had a meeting with Obama (who stayed after the meeting for a chat – and who didn't). This could be crucial information for the press, among many other sectors.

To get to these results, the Enigma team had to collect gigantic amount of strategically selected data. This is a drastically different approach from Palantir, the security big data platform trusted by the CIA, the NSA, and the FBI, which offers a software platform with no data, a blank slate for users to fill in.

Oudghiri and his team have a well-oiled game plan to gather data: they select a series of strategic organizations with open data and crawl their websites to find really large files which will contain data, and then they send requests to access offline data.

That’s how they gather public data from the 24,000 .gov websites – the US government’s department’s domain -, the corporate registration data, the Crunchbase startups database, and the public companies among others. Companies go along, he says; almost none of his requests have been denied, and some even send data manually everyday, like FedEx who send its the container data everyday, letting Enigma know everything that came to the US from abroad. Now, the Enigma team adds data depending on what they assume is important or what its clients ask for.

The TechCrunch Disrupt NY 2013 winner managed to set itself apart from its competitors believe Oudghiri thanks to its holisitc vision, and a repository of public data that is probably the largest in the world – count 80 billions of rows of data, a good head start. 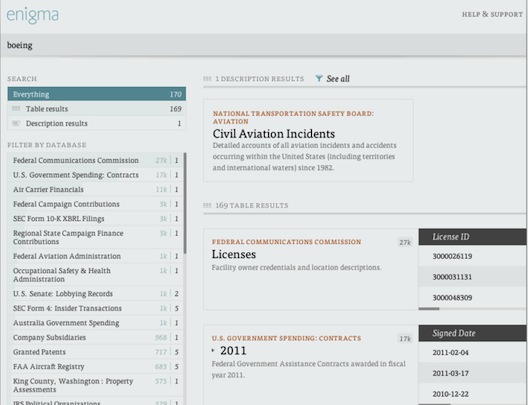 It’s by picking up data from across the web that Oudghiri started his entrepreneurial journey back in 2011. Quickly, Marc DaCosta, a friend with whom he studied philosophy at Columbia University, joined him as co-founder.

The two friends began an intense eight months of gathering data and bootstrapping to make their idea relevant enough to be attractive to potential investors.

Their patience paid off when Enigma’s alpha, launched early 2012, convinced potential investors (including The New York Times Company) to invest $1.45 million USD between April 2012 and February 2013.

A reversed freemium model, to make the world a better place

Once Enigma builds its revenue streams to be on par with big companies, it will open the service up to a freemium model – it should be implemented by Q1 or Q2 of 2014. Oudghiri doesn’t believe he’s going to generate any direct revenue from this switch to freemium, but he believes big data can and should be accessible, potentially allowing people to make the world a better place. Talking to Oudghiri, his passionate belief in Open Data is palpable.

“There’s a reason why [data] is public,” he explains. “If we have the White House’s visitors’ record, it’s because people deserve to know.”

“I’m a big believer in transparency,” he goes on, adding: “Modern societies have to be build on the truth.”

The dark side of big data

Still, during his demonstration, it only took a few click for Oudghiri to find information that could be dangerous in the wrong hands. Imagine what might happen if anyone could access Robert De Niro’s address in NYC – a bit of information that Hicham got with one simple click! – or how violated you might feel if your employees or neighbors got information regarding the value of your apartment.

“It’s a trade-off, we can’t do it selectively,” he justifies.

Enigma only provides data with 100% public license, assures Oudhiri. If people don’t feel comfortable having certain data in public, they can ask their government to make a law making it private, he says.

“It’s very scary,” he admits, “but you could have said the same thing about Google at the beginning” referring to people’s reaction when they discovered how easy it was to learn how to make a bomb.

Big data in the Arab world

Enigma is currently catering to the United States, but in the future it will expand to Europe and the BRIC countries, which the team thinks will be easier than its deployment in the United States.

What about the Arab world? Oudghiri admits it’s not on their shortlist although he’s deeply convinced that big data has an important role to play in the region’s journalistic development.

Open data in the Middle East and North Africa is far from being what one would assume, he says, noting that, against most expectations, Oman and Saudi Arabia are among the countries doing the most for open data in the region.